I have pretty much been the worst team in my keeper league for over ten years. It's about time I just did what someone else told me to do.

I don't know if it was my first fantasy baseball league, but it was certainly one of my earliest incarnations. It must have been around 1999 or 2000, and fantasy sports on Yahoo! (I don't know how an exclamation point so strongly integrates itself with a brand name, but I think I'd like to do that with my name. Except it would be Kenneth?) were really taking off. I wasn't just participating in baseball and football, I'd join any fantasy sports league that was open.

Fantasy hockey? Never followed the NHL, but sign me up! Chris Pronger for the win!

I was in fantasy heaven or perhaps some fantasy of a fantasy. Fantasception. I was also trollin' around the Yahoo! message boards and came across a league looking for members to start a "keeper" league. "Keeper?" I thought to myself. "I hardly know her." I responded to myself. But this idea of keeping players every year and really investing that kind of time into a team sounded like fun. It was fantasy to the max. Finally, I could start to truly escape my real life!

I joined up with 11 dudes that I have never met in real life (still, over a decade later have only met one guy in the league, and he joined a few years later and then left to pursue music) in the Beer Drinkers Consortium League or better known as "The BDC". I wasn't much of a drinker at the time, but trust me when I say I've conformed. I don't know which players I started out with, I don't know who my first six keepers were. All I know is this:

I have, for the most part, been really f$%@ing outmatched.

In the entire time this league has been going on, with only 12 teams and four of them making the playoffs, I have only gone to the postseason one time and I didn't win. I'm not even the Pittsburgh Pirates of the league, because there was a very long time when the Pirates were good. I'm not even the Cubs, because the Cubs are still really popular. I'm more like the Tampa Bay Devil Rays, when they still had the Devil. Maybe it was because of the time that I kept Zach Duke over Scott Kazmir, back when Kazmir was still good. Maybe it was because of the time I lauded an owner for trading Matt Holliday to get Chris Shelton.

I backed the guy that traded for Holliday.

I've used top picks to get stellar-looking rookies like Jason Heyward. I dropped Mike Trout in the beginning of 2012. I've pretty much blown this thing six ways sideways from Sunday on a submarine. For that reason, it was time to completely stop listening to the biggest idiot in the league...

We held our annual draft on Monday night and I decided that without much in the way of bias, I would use FakeTeams own Top 200 rankings to draft my starting roster. If I had a starting roster spot open, then I had to do what the top 200 told me to do. There were more hitters available than pitchers, so it took awhile for me to start stocking the guys that throw things, but whatever. My instincts said not to do that. My instincts suck d.

Here are my six keepers:

Felix Hernandez (I am a Mariners fan, and I have had King Felix on my team for as long as the major league club has. This will never change.)

Jason Heyward (Because why would I stop now, I spent a first round pick on him!)

Doesn't seem like a bad squad to start off with, right? Then I must be screwing myself over in the draft and that was about to change. I hope. I had the second pick in the 1st (really the 7th) round of the draft. The first player taken was Jay Bruce. The next guy available is ranked 24th by FakeTeams. I don't know if I would have made this move, giving me three outfielders and two from the Braves, but it had to be done. These were the rules.

Though Yahoo said that Jacoby Ellsbury was the top player available, I had to go with BJ Upton. 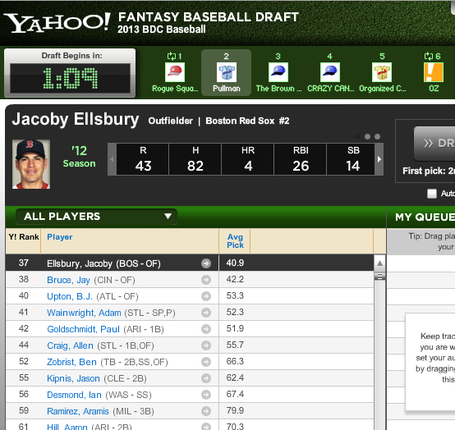 I wouldn't get Aroldis Chapman (we count K/9) for my staff. I wouldn't get Ben Zobrist to man my infield. The choice wasn't up to me, and my outfield was set. But I still had two utility spots to fill, if that's what I was meant to do. We don't snake the draft until the fourth round so that meant I was soon up again. I already had Wright at third, and this next guy wasn't someone I would have picked in 100 years, but I suck. Them's are the rules.

Isn't Aramis Ramirez old and washed up? I hate drafting anyone that is over the age of 26, even! But I had a util spot open and Ramirez was the top player on the board. Maybe I was not using the board right. Maybe I should have taken positional needs into account. But that's something that the old Kenneth? would have done. Time to listen to the new Kenneth&

Last time without a snake, I had to nail this pick because it would start to become huge gaps in between picks. Seriously, nothing is worse than waiting 22-some picks (the math should be really easy, I am so bad at math. Math and fantasy baseball were my two worst subjects in school.) in a draft, thank God for TV, phone, twitter, facebook, internet, YouTube... remember when you were drafting with a dial-up modem? Or, God forbid, in real life!?

I had to get this pick right. I have three outfielders, two third baseman, and oh no... one UTIL spot open. And the board does not have any pitchers on it that are worthy of being drafted now. It looks like I'm getting a fourth outfielder. Yay?

Welcome to the team, Alex Gordon. Umm... you're my second DH? Great. Wasn't most of your value tied into defense? Wait - I keep listening to MYSELF. And that's not good. I trust the words of my FakeTeams brethren.

Still, my openings were now C, 2B, SS, SP, SP... a whole lot of starting pitchers. So unless the board had one of those hard-to-find spots available, I would be getting a pitcher. Not so fast... Miguel Montero is available, and the top player on the FT Top 200. Welcome, Montero. At least you're not Jesus. Finally the long national nightmare came to an end in the fifth (really the eleventh) round. And aren't the Yankees known for their pitching? 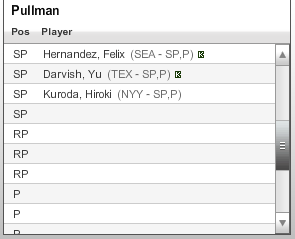 But probably the scariest moment came not when I had to make Hiroki Kuroda my number three starter, but when I once again had to go to the "isn't this guys best days behind him?" well and make a .230/.328/.400, 16 SB guy my starter at second base because gosh darn it, Rickie Weeks you are the best player available on my board. I mean seriously, look at my board!

Players that I would have taken before Rickie Weeks in this case:

Chase Headley, Pedro Alvarez, Carl Crawford, David Ortiz, Mike Moustakas, Hunter Pence, Roy Halladay. There was also Kyle Seager, Dan Haren, Dom Brown, Oscar Taveraz, and Wil Myers. But under my rules I had to follow Ray's guidelines and also make sure I was drafting a guy that could start and not one that would toil on my bench because of my loaded outfield or because hey, Taveraz and Myers are barely legal.

And did I mention that I suck? (Or that I write for a fantasy baseball website? hehe.)

The draft continued on and on like this, as you can imagine since you've participated in many fantasy drafts and know that they last about 57 minutes longer than you think they should. I drafted A.J. Burnett over Julio Teheran. I took Josh Beckett over Jonathan Niese. And I continued to do my best until the top 200 was all used up and only had to fill my closers and my bench. Maybe sneak in some promising young stud in the end. (Oh, Pedro Alvarez was still mine eventually. Dan Straily is technically one of my starters. Trevor Bauer is somehow there.)

But by the end I had a squad. It wasn't the squad that I would have picked, necessarily, but that's a good thing. Because I have been really terrible at fantasy baseball and this is me writing on a fantasy baseball website.

Wish us me luck! (If you love a good underdog story at least. Maybe this year I can just be the "Rays")

(Now I'm picturing Justin Timberlake having a meeting with Andrew Friedman and saying "Here's one piece of advice. Drop the "Devil".)