When evaluating pitchers, what are the best measures to use? We set up a bracket to decide the best of them all.

If you’re like me, your NCAA tournament bracket has been busted for days and you are wondering why you even bother to fill one out in the first place. So today, inspired by Matt Hunter's awesome article at Beyond the Box score, I decided to fill out a different type of bracket. This bracket features pitching statistics used to evaluate players for fantasy purposes. The winner of each matchup will be the better of the two metrics. And the best part is I can’t lose, because I am selecting the winners.

To make the bracket I selected 16 of the best and most commonly used measures of pitching. 5 of the 16 are the standard 5x5 categories, but as you will see, those are not necessarily the 5 best ways to determine which pitchers will be successful this season.

For those of you with drafts coming up throughout the next weekend, these are the statistics I would recommend using to evaluate targets. For the rest of you that have completed your draft or drafts, I would use these tools in making rosters moves (adds, drops, and trades) throughout the season. Now, in the end there can be only one winner, but please remember to use a combination of these numbers to value pitchers. With that, let’s get to our bracket. 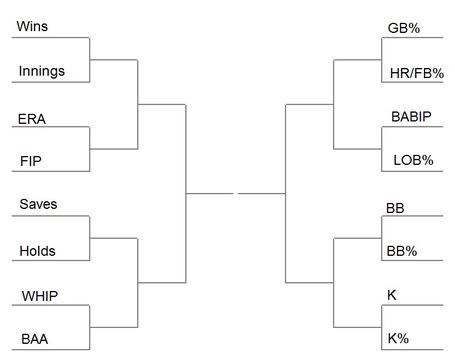 Although wins is one of the 5x5 categories, it is an extremely flawed statistic for pitchers. Wins are extremely difficult to predict because they are almost entirely dependent on run support. Last year Phil Hughes of the Yankees was a 16-game winner, while the Phillies’ Cliff Lee won just 6 games despite an ERA that was more than a full run lower. Sure you can speculate that a pitcher has a better chance for wins if he is a on a good team, yet the reality remains that wins cannot be forecasted with any real accuracy.

Innings pitched, on the other hand, remain a severely underrated stat. I think fantasy owners sometimes forget the impact of innings on the rate stats. C.C. Sabathia was better than James Shields in all three rates (3.38 to 3.52 in ERA, 1.14 to 1.17in WHIP, and 8.87 to 8.82 K/9), but the fact that Shields had almost 30 more innings pitched than Sabathia made his rates more valuable and gave him a distinct edge in total strikeouts. Inning totals are also more predictable from year to year, so they move on in this matchup.

The matchup pits a traditional (and standard 5x5) stat versus one of the sabermetric measures. We all should be familiar with ERA; FIP, or fielding independent pitching, judges a pitcher based off of just strikeouts, walks, and home runs allowed. The number has a constant built in that puts it on the same scale as ERA.

So the question becomes, when evaluating pitchers is it better to look at all runs allowed, or should we focus strictly on the three true outcomes that are independent of the pitcher’s defense? I think in most cases, FIP is a better representation of the true talent of a pitcher, eliminating luck and better predicting what a pitcher’s ERA will be in the future. That being said, defense does have an impact on ERA, which is the stat we are using in fantasy, and there are several pitchers (Matt Cain, Ricky Nolasco, etc.) that either over or underperform their FIP on a consistent basis. Still, for the vast majority FIP is a better measure to judge pitchers so it narrowly moves on in this battle.

Our next matchup focuses on the relievers. Saves and holds are the two numbers used to quantify how games are finished. Sadly, though this is the least interesting matchup of the first round because both stats are terribly flawed. As many, chiefly Matthew Berry of ESPN, have noted in the past you can almost ignore saves in your drafts because players like Fernando Rodney, Greg Holland, and Steve Cishek emerge every season. Still, as unpredictable as saves are, they are much more predictable than holds. In typical fashion, only three players finished in the top-20 in holds both of the last two seasons. Even if your league uses holds, I don’t think I would use the number for evaluative purposes. No surprise then, saves moves on the next round.

Our next pairing features WHIP (walks + hits per innings pitches) facing off against BAA (batting average against). WHIP is the superior stat, I just wanted to highlight BAA because I do think it gets overlooked, especially when evaluating relievers. BAA is a good measure of how dominant some relievers are, and it is a nice number to also evaluate when you are looking at a pitcher’s BABIP. The stat’s dependency on outside factors, and the fact that it ignores walks, means WHIP joins Saves as 5x5 categories on to the Elite 8.

This will be the most obvious statement of the article, but allowing home runs is bad for pitchers. Keeping with the obvious statement theme, a groundball cannot be a home run (unless of course Billy Hamilton hits it) so ground ball pitchers tend to give up fewer home runs than fly ball starters. The other way to limit home runs is by allowing a small percentage of fly balls to go over the fence. That sounds simple enough, but it has proven more difficult to sustain from year to year. The noise in HR/FB% makes it an unreliable stat, meaning GB% advances to the next round.

Ahh, the matchup of the two "luck" statistics. Considering we are in March, you have probably been enamored with nuggets about how Pitcher X’s BABIP or LOB% is due for some sort of regression this year. Which one is the better measure of a pitcher though? BABIP, or batting average on balls in play, measures exactly what it sounds like it does: the number is the batting average on balls that hitters put into the playing field (so not home runs) against the pitcher. LOB%, or strand rate, measures how many runners a pitcher put on base, but did not allow to score a run. League average BABIP in 2012 was .293 so any pitcher with a number way above or below is naturally assumed to be lucky or unlucky. Really though, without context BABIP is not a great measure of a pitcher. BABIP has a ton of outside factors that drive the number, so it is usually best to measure BABIP against the pitcher’s career rate rather than league average. For instance, Jeremy Hellickson had a BABIP of .261 last year so many would say he was lucky, when in reality his BABIP was .017 higher than his career rate of .244. Strand rate, on the other hand, correlates much better to league average and for that reason it moves on the next round.

The last two matchups are rather similar so in an effort to consolidate, we will look at them together. Many of you may have looked at the bracket and asked where are BB/9 and K/9, the trendiest stats used in evaluating pitchers. Honestly, I don’t love either of them. Over at Beyond the Box Score James Gentile wrote that K% and BB% are better measures than BB/9 and K/9:

As a pitcher allows more Hits per Ball in Play, he becomes less efficient. He ends up facing more batters and getting fewer outs, which consequently means fewer innings. But if he's still striking out batters at the same rate (say 20%) all the while, his K/9 is going to look a lot shinier with those fewer Innings.

The differences are subtle, but very real. Still not convinced that BB% and K% are better than the per-9 inning stats? Look at the leader boards below of the top qualified starters in each measure:

Although the differences are subtle, you would have much rather had the pitchers on the right hand side last year. So yes the % stats are better, and they are also both better measures of effectiveness than the raw counting totals. 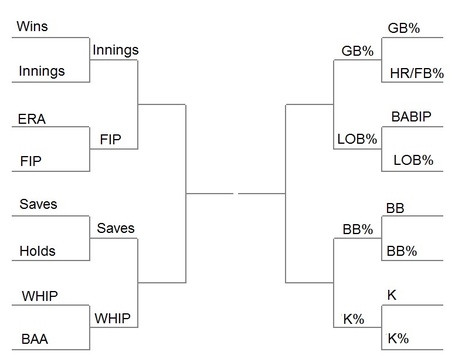 Now that we've touched on every stat, we'll make the later rounds a bit shorter. As I noted back in our first matchup, innings pitched is a really undervalued consideration for pitchers. But it's not nearly as useful as FIP, one of the best indicator's of true pitching performance. FIP is on to the final four.

The only two of the 5x5 categories to make it through round one meet in this matchup. Of the two, WHIP is the much more reliable stat. Based on walk rates and batted ball data, we can accurately predict a range of likely outcomes for a pitcher's WHIP. Saves are dependent on team success and opportunity, making them nearly impossible to project even for established closers. Craig Kimbrel is everyone's number 1 closer this year, but I think his projected WHIP plays a larger part in that ranking than his projected saves.

Rob Neyer wrote an interesting article recently over at Baseball Nation asking if we overrate ground ball pitchers? I am unsure if we do for real life impact, but I think fantasy owners get too caught up in ground ball pitchers. LOB% doesn't depend nearly as much on defense and it helps identify pitcher's who could be due for some positive or negative regression.

Although both metrics are important, one thing separates the two: Strikeouts is one of the scoring categories for pitchers, walks is not. So K% heads to final four. 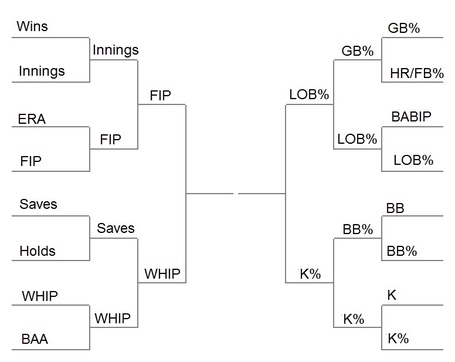 These two have things in common. They rhyme. They both utilize a pitcher's walk total. They can both be used for relievers or starters. The difference between the two? WHIP is dependent on BABIP, while FIP is not. For that reason, FIP is the better measure.

At this point in the bracket, every measure is a solid way to look a pitcher, but LOB% doesn't directly tell us anything about any of the standard five categories. While it's useful, it just doesn't belong on the court with K%. 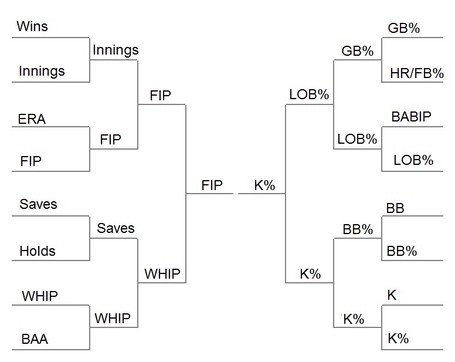 FIP had to be the odds on favorite coming into the tournament, as run prevention is perceived as the most important aspect of pitching and FIP, the sabermetric darling, is my favorite measure of run prevention. Alas, for me, K% reigns supreme over all other pitching measures. It represents a simple concept, the number of hitters a pitcher strikes out, but I like it for several reasons. First, as previously mentioned strikeouts are a scoring category making it directly connect to fantasy scoring. Second, strikeout % relates to the rate satistics as well. Every batter a pitcher strikouts lowers their ERA and WHIP. Thirdly, K% is a great measure for starters and relievers. Just remember, that even though K% is our champ, you should use most, if not all, of these numbers to evaluate players.