The Art of War: Gaining Intelligence

Brian Creagh offers a solution to juggling multiple teams, while setting up to gather as much information as possible.

Share All sharing options for: The Art of War: Gaining Intelligence

"It is only the enlightened ruler and the wise general who will use the highest intelligence of the army for the purposes of spying, and thereby they achieve great results." - Sun Tzu, The Art of War

I wanted to share a relatively quick post with all of you, regarding a topic I've discussed with multiple readers in the past few days: How to balance multiple teams, on different websites, with different rules and settings. My answer to all of these concerns is to create an Excel or Google Docs sheet that standardizes the way you look at all your rosters and allows you to gather intel on other managers. My version of this is relatively simple and I'll share some screenshots below to give you an idea of what I believe is most important. I have it broken down in to 3 separate parts: The Roster, The Timeframe, and the Trade Block. Let's take a look at each one. Keep in mind there are almost an infinite ways of setting this up, and the purpose of this post is to introduce this idea to managers who aren't using one, while offering ways to improve a process already in place by some managers.

This is the basic part. Start with a basic skeleton of your leagues roster size and fill it in accordingly. I fill one of these out during every draft I participate in, because the draft rooms are terrible at managing the multi-position eligible players. I hate when I draft a 2B/SS-eligible player, the draft room lists him as my 2B, but if I grab another 2B a few rounds later with the intention of sliding the first guy over to SS, the draft room just puts the new player on my bench and shows an opening at the SS position. Not terribly difficult to work-around, but it still infuriates me. Below is an example from my 30-team Salary Cap league that I recently took over a team in. It's a fixer-upper so easy on the Jorge de la Rosa comments. 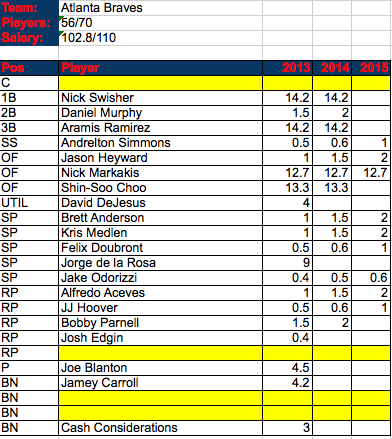 This can be done in any method, but one of the most important points for dynasty/keeper leagues is to forecast out the next few years. Even if there is no salary cap and you just mark with an "x", you can easily identify where future holes might develop in your roster. This league also has a deep minor league roster so that is tracked as well: 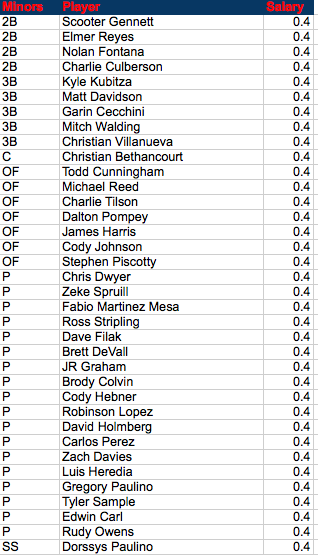 I found this concept from previous Fake Teams writer (and current Baseball Prospectus writer), Bret Sayre, on his "Rebuilding a Dynasty League Team" series (here). The purpose of this section is to get a grasp on the timeframe your team has to be competitive. It also is a nice sanity check for inaugural drafts in dynasty/keeper leagues to see the age distribution for your roster as you draft. There are two parts: your major league section and minor league section which have different criteria for sorting players. Here is the major league section:

Bret identifies "Pre-Prime" as 26 and younger, "Prime" as 27-31", Post-Prime 1 as anyone over 31 years old who is likely to contribute for another 4+ years, a la Albert Pujols, and Post-Prime 2 is for players who's value doesn't extend much beyond the next 2 or 3 seasons.

And the minor league section: 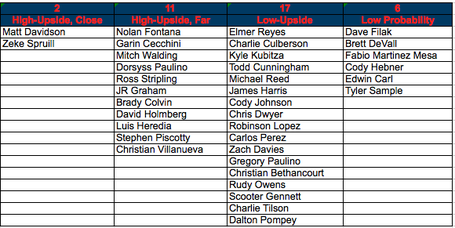 This is where you gain critical intel on your opponents. Every trade offer, no matter how ridiculous it may seem, should be tracked in some fashion in your trade block. Any time an opposing manager inquires about the availability, make note of it regardless of your response. The Trade Block functions as an archive of all players an opposing manager has had interest in at one time or another. I chose to go the simple route and just mark it with an "x", but I know some managers who mark whether it was a trade inquiry or whether a manager bid on the player in Free Agency and ultimately lost the auction. The complexity is up to you, but the underlying purpose remains the same: take note of everything. It is so helpful to have a record of those random role players a manager wanted to sneak in to a trade with you before it fell apart. Next season when you're can't find a way to close a deal, throw in that B-level prospect he used to be interested so that you can seal the deal. Below is my current trade block for this league. I apologize for the difficult to read image. I had to cut off a couple of columns just to make it this small:

I wish I could find a way to display all these pieces together on an Excel sheet so that you can get a better idea of how all of this comes together in a sort of Roster Dashboard where all your info is easily digestible. You can create a separate tab for each roster to easily bounce between leagues and manage all of your different teams in one Excel Workbook.

I'd love to hear some of the things other managers track in their Dashboards, so drop a line in the comments with your ideas.