Injuries are mounting and owners are scrambling to find replacements. Have no fear, we got you covered.

There are some crucial injuries that have come about that need to be discussed. Game Week 20 starts tomorrow and if you don't pay attention, you could be without a full squad. Here's everything you need to know about who is injured and who you should target as a replacement.

Giroud picked up an ankle injury and is expected to be out until January 13th. Luckily for Arsenal, Lukas Podolski returned from injury and scored in his first appearance since August. Podolski came on to replace an injured Aaron Ramsey against West Ham and could be in line for a lot more playing time as Arsenal's injury list continues to grow.

I expect Santi Cazorla and Podolski to shoulder the majority of the responsibility in attack as well as Walcott should he be fit enough to play.

Rooney has had a nagging groin injury that forced him to miss the Norwich match and he is now listed as doubtful for the big Tottenham match. Van Persie, on the other hand, has been out with a thigh injury for what seems to be forever. RVP is pretty much a lock to miss this weeks match as well, and we shouldn't expect to see him back until at least January 11th.

Lampard picked up a muscular injury during the Liverpool match which forced him off at halftime. He will miss this weeks match against Southampton and it is unclear if he will need to miss more time. With Lampard aging, I would expect Mourinho to proceed with caution and have Lampard miss at least 2-3 matches. Branislav Ivanovic also picked up a knock which forced him to be substituted but it is not feared to be serious. He could miss the Southampton match as a precaution.

Other notable Chelsea inuries: none, other than Marco Van Ginkel who has been out for the majority of the season. David Luiz will miss this match due to picking up his 5th yellow card in the Liverpool match and is therefore suspended for one match.

Jagielka has been a stud this season and his presence will missed. He is expected to be out of action until January 28th with a hamstring injury. One stud goes down, another comes back - Leighton Baines has returned from a toe injury and started and played the full 90 minutes against Southampton.

Other notable Everton injuries: Gerard Deulofeu (OUT), Darron Gibson (OUT), Arouna Kone (OUT)

That pretty much wraps it up. Personally, I am taking Rooney out of my squad and replacing him with Lukas Podolski. I think the match up is fantastic for Podolski and he should be able to take full advantage of a weak Cardiff side. I have also taken Ozil and Ramsey out and replaced them with Jesus Navas and Eden Hazard. Here's a peak at my team: 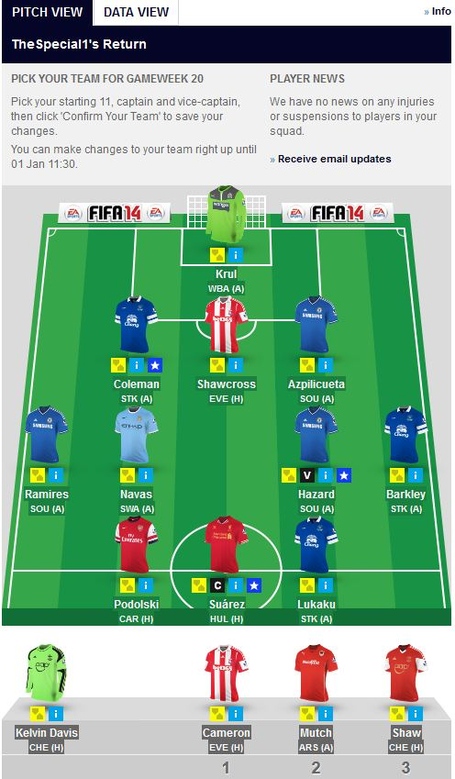 How is your squad shaping up? Have injuries forced you to make wholesale changes like me?