We are exactly halfway through the EPL season and the race for the Barclay's Premier League Trophy is as close as ever.

I hope everyone enjoyed the holidays and spent some quality time with your loved ones. Hopefully, you also managed to watch some Premier League action as well. We were treated with some fantastic clashes as Manchester United narrowly escaped Hull City during Boxing Day, Southampton put the nail in Malky Mackay's coffin, defeating Cardiff 3-0, Sunderland stunned Everton 1-0, Arsenal continued to roll by beating West Ham 3-1, Newcastle slaughtered Stoke City 5-1, and Manchester City defeated Liverpool 2-1.

However, we have some bad news to report. Aaron Ramsey was forced off the pitch in the 65th minute of Arsenal's match against West Ham. At the time, Arsenal were trailing 1-0. Ramsey looked to have pulled a muscle in his thigh as he gestured toward the sideline to be substituted. Lukas Podolski, who has long been injured himself, was finally fit and replaced Ramsey. Podolski went on to score the 3rd goal that ultimately sealed the victory for Arsenal. We have been shoving Ramsey down your throats all season long because he has been absolutely remarkable, and at terrific value to boot. Word is now coming out that Arsenal fear he will be out for at least a month, maybe longer. It will all depend on whether the scan reveals a tear, or just a strain. In the meantime, I have taken Ramsey off my team completely and replaced him with Eden Hazard. Obviously, I had to free up some extra money to afford Hazard, I did so by removing Ramires and replacing him with Jordan Mutch. Speaking of Jordan Mutch, I would recommend adding him if you are looking for a cheap midfielder to round out your squad. I also recommend adding Podolski as he should be seeing more and more time on the pitch now that he is healthy.

Just a few days after the Boxing Day matches, we were gifted another full slate of matches on Saturday and Sunday. The most surprising result of the weekend was probably Hull City destroying Fulham 6-0. Before the game started, Hull had scored a grand total of 16 goals all season. Captain Robert Koren netted a brace, George Boyd, Matt Fryatt, Ahmed El Mohamady and Tom Huddlestone joined in with a goal each. Don't expect Hull to come anywhere near 6 goals ever again, but, if you are looking to add a Hull City player to your team, Koren, Jake Livermore, Huddlestone and El Mohamady would be the names I'd target.

In their first match without Malky Mackay, the manager that got them promoted, Cardiff started out very strong and looked like a good bet to grab all 3 points from Sunderland. Jordan Mutch had a standout performance, he was literally everywhere. He was extremely dangerous and almost scored just a few minutes into the match. It wasn't long after, just 6 minutes into the match, Mutch found the back of the net for his fourth goal of the season. Cardiff continued to look dangerous and in the 58th minute, Mutch found Frazier Campbell in the box to make it 2-0. Sunderland's most dangerous player of the 1st half, Fabio Borini had to be replaced with Steven Fletcher at the start of the 2nd half due to illness. During the 2nd half, we learned Borini had actually collapsed, was unconscious and on the way to a hospital. Thankfully, he has been released from the hospital now and is recovering. Steven Fletcher managed to pull one back for Sunderland in the 83rd minute, giving them a glimmer of hope. In a frantic final 10 minutes, Sunderland did the unthinkable and Jack Colback's deflected shot, floated into the back of the net to give Sunderland a much needed point. After that goal was scored, Vincent Tan, billionaire owner of Cardiff, was seen booing his team. Yes, the owner was booing his own team.

The Match of the Week had to be Chelsea vs Liverpool and it definitely lived up to the hype. It didn't take long for someone to get on the board, as Chelsea conceded, once again, from a set piece in just the 3rd minute. A free kick was belted into the penalty area and Chelsea looked like schoolboys trying to frantically clear the ball but simply couldn't and Martin Skrtel managed to find the ball and guide it into the back of the net. After that, it was the Eden Hazard show. Hazard seems to be getting better and better as each game goes by and watching him play is simply a thing of beauty. Hazard tied the game up in the 17th minute with a sublime cut into the middle and blasted a strike past Mignolet. David Luiz, starting the match in the midfield for the first time this season, played a fantastic lob for Cesar Azpilicueta to latch onto and cross into the box for a sliding Samuel Eto'o to make it 2-1 before the half. That proved to be the winning goal and Liverpool's second straight loss. Going into the New Year, Chelsea sit in 3rd place with 40 points, just 2 points behind league leaders Arsenal.

PLAYERS TO TARGET FOR THE NEW YEAR:

PLAYERS YOU SHOULD ALREADY HAVE: 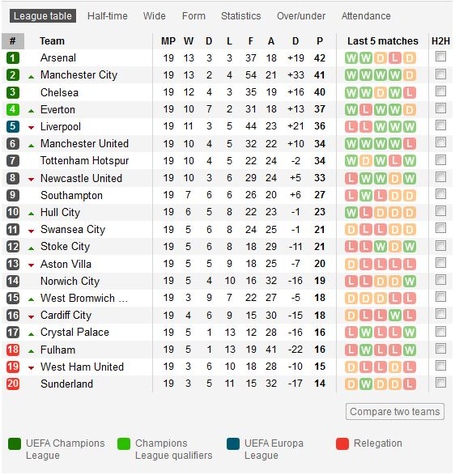