The Rays, Reds and Diamondbacks hooked up on a three team trade that will have some fantasy impact.

Share All sharing options for: Rays Trade for Hanigan in Three Team Deal

After signing Brayan Pena earlier this offseason, the Reds had a surplus at catcher and were reportedly looking to move Ryan Hanigan. The Reds did just that today sending Hanigan to the Rays as part of a three-team trade that involved the Diamondbacks trading Heath Bell to the Rays and prospect David Holmberg to the Reds. Rays farmhand Justin Choate and a player to be named later are headed from Tampa to Arizona to round out the deal. This is a move that seems like a more interesting real baseball on the surface, but there are fantasy impacts as well. 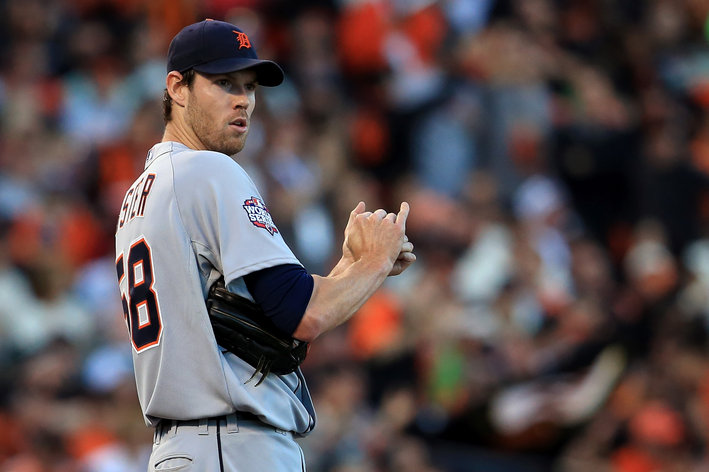 Doug Fister should see a significant increase in his fantasy value in 2014 as a member of the Washington Nationals.

Devin Mesoraco stands to gain the most from this deal after backing up Hanigan for the last two years as he will finally get the chance to be the everyday guy in Cincinnati. As is the case with many catchers, Mesoraco has struggled at the plate early in his career but he has above average power and has shown the ability to be an above average hitter in the minors. He makes a lot of contact and walks at a decent clip although his BB% did dip some last season. Still, Mes is stepping into a great situation. He's entering his age 26 season, has had some time to develop without the pressures of starting every day, and he is being inserted into lineup with the likes of Joey Votto and Jay Bruce. I would go as far as to say that he will end up a top-12 catcher although he probably won't be drafted like that in the vast majority of leagues.

The Reds dealt from a strength and received a nice piece to add some rotation depth in David Holmberg. A former second round pick and the Diamondbacks' sixth overall prospect coming into 2012 (according to Baseball America), Holmberg has the ceiling of a number three starter and is on the cusp of the big leagues. The lefty doesn't have overpowering stuff but shows pitchability and a mound presence that helps his low-90s fastball and offspeed pitches play up. He has an excellent changeup and his slider and curveball show the potential to be average pitches. The move from Arizona probably won't affect him much as he is leaving one hitting environment only to move to another and he has a dent GB/FB ratio. Holmberg probably won't make the rotation out of spring training but he is likely one of the first options when and if the Reds need a starter to fill in. I don't think Holmberg holds much value in 2014 but he could end up being a nice pickup if he comes into a spot in the rotation.

The Rays we very "Rays-like" in making this deal, adding a defensively-minded (specifically pitch framing) catcher in Hanigan and somewhat of a reclamation bullpen project with Heath Bell. Hanigan and Jose Molina are two of the best catchers in the league at calling games and working with a pitching staff and I think the Rays pitchers will benefit from his addition, although the effects may not be felt much in terms of fantasy. He's also not completely inept with a bat in his hand as he strokes the ball pretty well, evidenced by a career 22% LD rate. His BABIP was criminally low at .198 in 2013 and, since he will share time with Molina, he probably won't be worth much to even deep mixed leagues but AL-only owners who roster two catchers could do worse.

Heath Bell has been a bit of a disaster since signing his megadeal with the Marlins two years ago but he showed some signs of hope last season. He posted the lowest walk rate of his career and his strikeout percentage jumped up nearly five percent. Bell's SwStr% was the highest it's been in three years and he showed some improvement with his curveball that will hopefully help against right handed batters. The biggest problem for Bell in Arizona was giving up the long ball, something that should be aided by a move to Tropicana field. Bell was told that he would have a chance to work in the ninth inning and while I'm not extremely high on his prospects, it usually doesn't pay to bet against the Rays.

The Diamondbacks were in this deal with the almost the sole intention of ridding themselves of Heath Bell and his contract. They gave up the best prospect in the deal and, while there remains a player to be named later, they got very little in return. Justin Choate profiles as a soft-throwing reliever who relies on an ability to throw strikes and does not offer anything to fantasy owners.

All stats courtesy of FanGraphs and Baseball-Reference.

Zack Smith is a writer for Fake Teams.