In a return to the PRAG series, Brian Creagh takes a look at Eric Hosmer to see if 2013's success is a sign of more things to come.

After a brief hiatus for the World Series and setting up my off-season writing schedule (our excellent minor league series isn’t writing itself), my favorite series is back on a weekly schedule: Progress, Regress, Anyone’s Guess. Every Friday we will take an in-depth look at a player who drastically over-performed or under-performed expectations in 2013 and attempt to determine if the change in value was due to legitimate progress or if things were merely luck driven and we can expect regression (either positive or negative) in 2014. If you’ve missed the two earlier pieces of the series we took a look at Francisco Liriano here and Starlin Castro here. I will drop one of these every Friday during the off-season.

This week we will take a look at Kansas City Royals First Baseman, Eric Hosmer and his breakout campaign in 2013. This season we saw Hosmer take a huge step towards justifying the high praises he received while climbing the minor league ranks, ultimately ending up as the #8 prospect on Baseball America’s Top 100 in 2011. The lefty finished the year with a .302/.353/.448 triple slash to go with 17 HRs and 11 SBs. This following a putrid 2012 where the triple slash was .232/.304/.359 and many were left wondering what went wrong with this highly-regarded prospect.

The casual observer may quickly disregard Hosmer’s 2012 stats as "unlucky" after seeing his .255 BABIP and 11.3 HR/FB% and they wouldn’t be wrong in doing so; but they are leaving out a very large part of the analysis that defines Eric Hosmer. Dismissing 2012’s stats and looking only at 2013’s does not give us the entire risk profile for Hosmer, and makes it extremely difficult to project where he goes from here. Identifying the changes that defined his 2013 success will give us a much clearer picture if his numbers are repeatable, and most importantly, if the power will ever develop.

So what went wrong for Hosmer in 2012, and how did he fix it this season? We’ll take a look at three major differences between the two seasons and whether these are sustainable solutions or if the 2012 Hosmer might come back in 2014.

To start we’ll take a look at his batted ball profile between the two seasons:

Yes, luck played a large part as the BABIP underperformed the expected value by over 50 points, but the difference between 2012 and 2013 expected BABIP is still a significant 30 percentage points. Clearly there is more than luck to explain the difference.

The difference comes in the decreased number of fly balls and increased number of line drives. Line drives are more likely to drop into play for a base hit while flyballs are far more likely to be outs, and Hosmer’s 4% change in LD% took a lot of balls in play that were once outs and turned them singles and doubles. Hosmer has always been viewed as a line drive hitter and his quick, level swing plane is what most scouts fell in love with, which is to say his 2013 level is very much sustainable. Consider the fact that his LD% ranked only 54th amongst qualified hitters so there’s definitely even room for improvement here.

Not only did Hosmer hit more line drives, but he hit them harder and more evenly disbursed across the field. I wish I had access to the Hit F/X to back up my claim of harder hit line drives, but the best I can do is show the comparison of 2012 line drives and 2013 on a spray chart (click to zoom).

The spray charts above are for 2012 and 2013 and look only at line drives. First you’ll notice the overwhelming quantity of line drives on the 2013 chart, but do keep in mind Hosmer saw 82 more plate appearances in 2013 as well. Second, look at the distribution of line drives between the two years. 2013 is far more balanced between right and left field where 2012 is heavier in left field. Hosmer is a lefty, so this means in 2013 he was turning on more pitches and pulling them into left, presumably hitting balls harder and making them more difficult to put away for an out. It’s a little fuzzy logic that I’m drawing, but I think the argument holds water.

Hosmer should be able to continue to hit line drives at a higher percentage and hit them all over the field to keep his BABIP at a more friendly level.

Another big difference between Hosmer’s two seasons is his two-strike approach. Two years ago, when Hosmer had two strikes on him, he might as well have walked back to the dugout because he was almost a guaranteed out. In 264 plate appearances where Hosmer fell into a two-strike count he hit .128/.197/.157. He showed poor strike zone judgment and while his bat to ball abilities prevented him from striking out a lot, he would inevitably make weak contact and still find himself making outs. His two-strike approach changed in 2013 as he improved his triple slash rate to .223/.269/.300 in 320 plate appearances with a two-strike count. To visualize this difference take a look at the two heat maps below. Each are Hosmer’s batting average on two-strike counts the first being his 2012 season and the second his 2013. 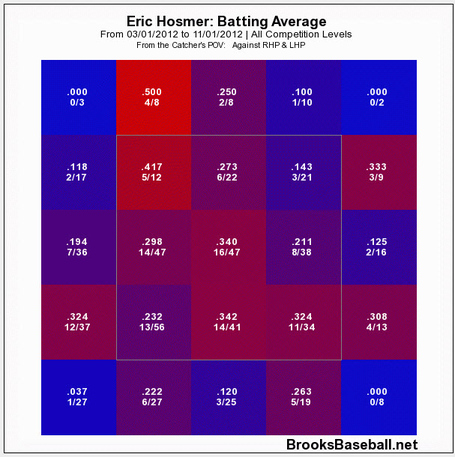 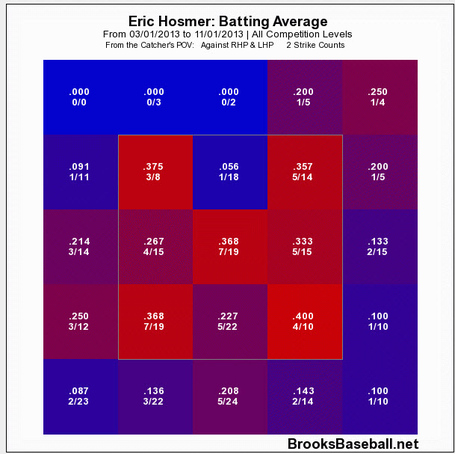 Notice the radical difference on balls thrown inside the strike zone. To me, this means Hosmer learned to better command the strike zone and refine his two-strike approach. No longer was he taking balls low and away and weakly pulling them over for grounders to the second basemen as left-handed hitters so typically do. Instead he sat back and took the low and away pitches the other way or found a pitch in the strike zone and made the most of it. This rolls into my third point on Hosmer’s decreased # of pulled groundballs.

Extreme BABIP fluctuations like Hosmer’s are typically caused by something more than luck. And while his change in batted profile explains a lot of it, there is more to it than that. Defenses began to play Hosmer differently midway through the 2013 season and this had a large impact on the amount of balls in play that dropped in for hits. For almost all of 2012, defenses would shift and pull an extra infielder to the right side of the infield. As the spray chart below shows, Hosmer was well known for topping over pitches and grounding them weekly to the right hand side and the defenses adjusted with the shift. This first chart is Hosmer’s 2012 spray chart for only groundballs. 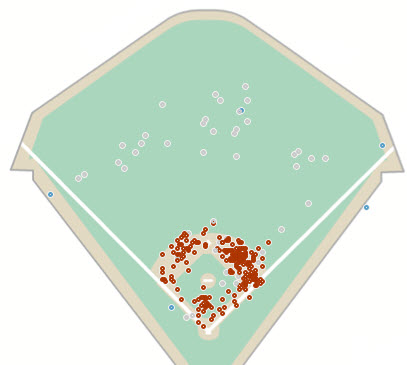 The adjustments discussed in the section above resulted in a new looking spray chart for 2013: 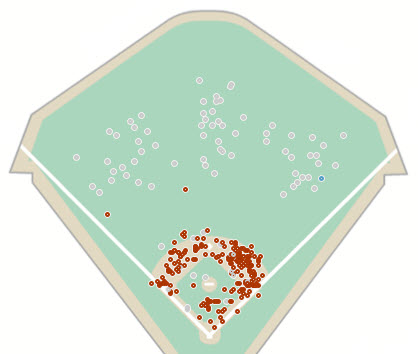 As a result, early in the season defenses slowly stopped shifting against Hosmer. Defenses were forced to respect Hosmer’s ability to hit it to all areas of the field and allowed for more balls in play to drop in for hits. This is the largest factor in Hosmer’s shift in BABIP between 2012 and 2013. It is basic game theory at it’s finest: the defenses adjusted to Hosmer’s tendencies by shifting, so Hosmer made adjustments to his approach, and the defenses in turn made another adjustment. That’s what big league hitters do and that’s why Hosmer will continue to find success.

Progress. The reasons laid out above are why I believe 2013 is the real Eric Hosmer with the ability for even better results as he refines his strike zone judgment and possibly increases the line drive rate. Unfortunately, this all says nothing about Hosmer’s power potential going forward. Hosmer’s fly ball percentage has dropped 3% each of the last 2 seasons, mostly to the benefit of his line drive percentage. This does not bode well for his future home run totals unless he decides to alter his approach. Hosmer appears to get pretty good lift on the ball, so maybe there’s a chance he can crack 20 HRs without ever dropping the line drive rate, but for now it seems like an either/or proposition: either a higher batting average and more line drives, or a lower batting average, more strikeouts, and more home runs. One could probably debate the merits of each side to that argument, but I’ll take the .300 hitting first basemen with 15-20 HRs and 10 SBs any day (maybe that’s why I’m higher on Joey Votto than most). Power is down across the league and the 1B position is a shell of it’s former self, I’ll take the pure hitter and hope for a power spike, as opposed to the power bat that tends to be a bit streaky and kills me in the AVG category.

As I plan out the rest of this series, I’m hoping to take it all the way to March. I sent out an intial request for names to write up and received some excellent feedback; however, I’m looking for more. In no particular order here is who I have planned to this point: