With Brian McCann signing with the Yankees, he now moves into the top spot in my early 2014 catcher rankings. Here are my reasons.

I published some of my thoughts about Brian McCann signing with the Yankees on Sunday, and today, I publish my updated 2014 fantasy catcher rankings. I moved McCann to the top spot in my catcher rankings mainly due to the fact that moving to Yankee Stadium with the short porch in right field, gives him the possibility of approaching, or even exceeding, 30 home runs in 2014.

Not only is McCann moving to Yankee Stadium, but he moving to the American League affords him the chance to DH about 15-20 games per season, which keeps his power bat in the lineup and allows him to rest at the same time. We could see him play 140+ game for the first time since 2010 next season.

Look, I was not happy when McCann decided he was the unwritten rule police, and I wrote about that on these pages last summer, but when a left handed power hitting catcher moves to a hitters park that benefits lefty power hitters, you have to stop and take notice.

Here is a comparison of the dimensions of Yankee Stadium and Turner Field:

Here is a look at all of the fly balls McCann hit in 2013. Notice where most of his home runs landed. Also notice how many died on, or just in front of, the warning track. Yeah, if they were hit in Yankee Stadium, he would have touched all four bases. And this chart is based on just 102 games he played last season, so the home run total should increase with the move to Yankee Stadium. 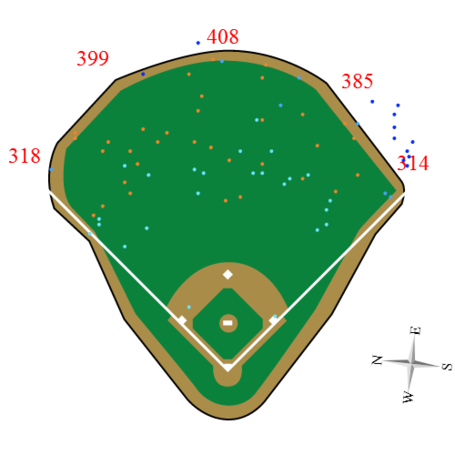 Let's take a look at my updated 2014 fantasy catcher rankings:

So, am I too high on McCann for 2014? Vote in the poll below or let us hear your thoughts in the comments.