Brian Creagh takes a look at Josh Donaldson's 2013 season and tries to set a reasonable projection for 2014.

Any rational human being could not have expected the MVP candidacy of Josh Donaldson and I loved every second of it. There were no statistical trends pointing towards this kind of a breakout, and no minor league pedigree common to MVP contenders. Yet here was Josh Donaldson, a notch below Trout and Cabrera for AL MVP, but very much a valid member of the conversation. The best waiver addition in every fantasy league, Donaldson is on everyone's radar for 2014, but his exact coordinates have not been decided. This week's Progress, Regress, Anyone's Guess takes a look at Josh Donaldson to help pinpoint where he deserves to be selected in 2014 drafts and establish reasonable projections going forward.

Similar to previous PRAG articles, I'll take a look at three important characteristics of Donaldson's profile and determine if these signal future success or if they could be viewed as a sign of regression to the mean. Donaldson had a lot go right for him in 2013 and regression is expected by most, but with no track record to compare to, just how low is Donaldson's floor?

With 24 HRs in 2013, Josh Donaldson's power is no mirage. The power is real. Not that it was ever really doubted as Kevin Goldstein notes in his pre-2011 and pre-2012 rankings of the Oakland system:

Even ZiPS projected Donaldson for 15 HRs in 535 PAs so his 24 in 668 PAs isn't largely out producing expectations. Regardless of other variables (BABIP, K%, BB%, lineup construction, etc.) I would feel safe projecting Donaldson for another 20+ HR season.

This one is pretty simple - Donaldson saw a huge spike in BABIP and the highest since he saw similar levels during 50-game stints in A-ball in the Cubs organization. As the table below demonstrates, Donaldson did not see much of a change in his batted ball profile to support such a large rise in BABIP.

The increased groundball rate and a ~.300 minor league BABIP rate suggests that his .278 rate was low, but nothing supports the .333 we saw in 2013. Regression seems imminent.

Donaldson was at his best when he was turning on velocity and driving fastballs into the outfield. A look at Donaldson's batting average against hard pitches (Fastball, Sinker, Cutter) shows just how excellent he's been: 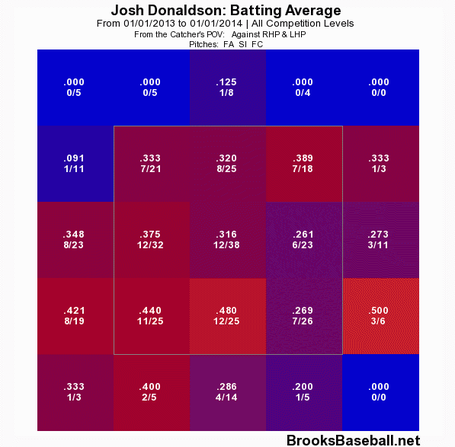 He's been even better than last year as we look at the same zone profile for Donaldson's 2012 season. 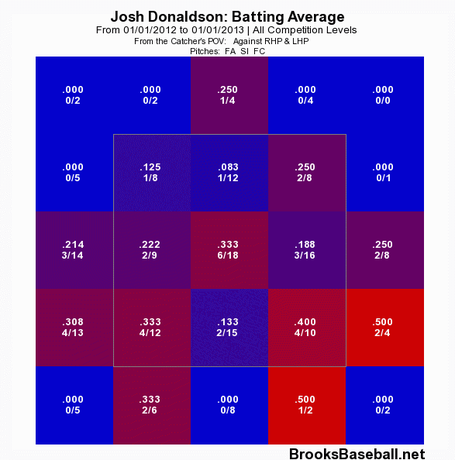 Pitchers appear to be slow to adjust to Donaldson's success in hitting hard stuff as these zone profiles show the counts and percentages of hard stuff Donaldson saw in the first and second halves respectively. 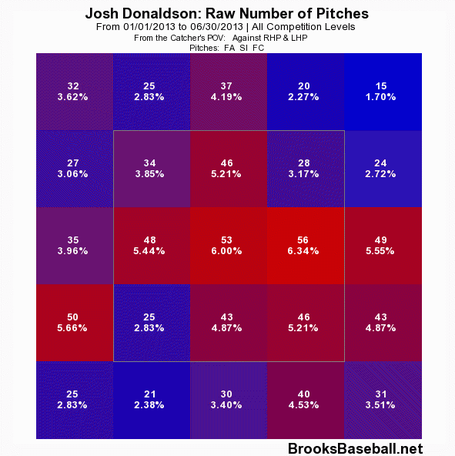 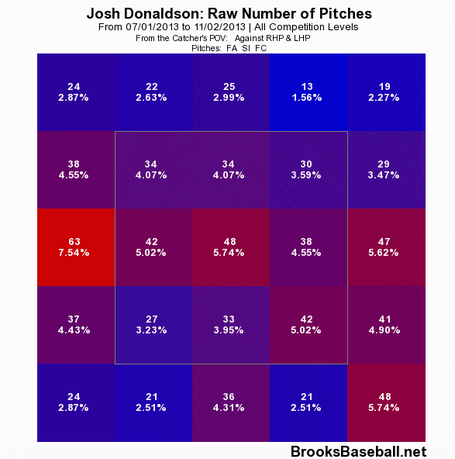 As you can see, pitchers eventually made the adjustment and Donaldson's numbers slipped as a result. Donaldson hit .310/.379/.522 with 16 HRs in the first half compared to .286/.391/.466 with 8 HRs in the second half. His second half was still successful, but the production clearly declined and it appears pitchers have found the way to attack Donaldson.

Heavy Regression. I think regression is baked into Donaldson's current price (he went in the 5th Round in a Mock Draft we conducted with the guys at The Fantasy Assembly), but I think we'll see numbers that don't support a top 75 pick. Donaldson did not perform well against off-speed/breaking pitches and he will see a bevy of them next year. An expected drop in BABIP will drop the AVG to a .270-.280 range and drop the counting stats to the 70-75 range. Combined with 20 HRs these numbers are nothing special at 3B (9 players fit this bill in 2013) and are more befitting of a mid-round draft pick.