I've been on record multiple times, in multiple forms of media as being a Francisco Liriano skeptic. Call it a guarded heart, call it naivety, call it whatever you like, but today I finally come around and hop on the Francisco Liriano bandwagon. This article is the start of an off-season series I will be running titled "Progress, Regress, Anyone's Guess". The series will take a look at players who over or underperformed expectations and try to determine if the results were based on a change in the player's development and approach or if the player just had a (un)fortunate run of events. My approach will be to determine what has changed, why it has changed, and what the likelihood is of the change being permanent.

2013 was the third breakout season for Francisco Liriano (2006 and 2010 being the priors) and many owners missed out after being burned by Liriano's inconsistency. For fantasy owners, the question heading into the off-season is where to rank Liriano for 2014 season. Is he the Top 25 pitcher of 2013, or the waiver wire fodder 2011 and 2012? Let's take a look at what lead to Liriano's success this season and see if it is a sustainable solution.

Increased Reliance on his Slider 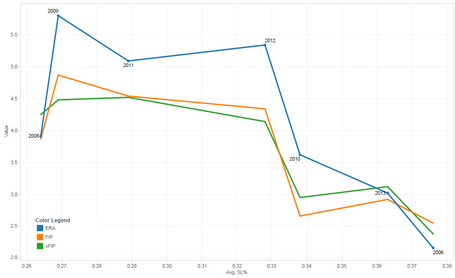 As you can see, the larger percentage of sliders he throws, the lower all three measures. So will Liriano continue to lean on the slider in 2014? To answer this, we need to look at why Liriano's repertoire has shifted so often in the past 6 years. Liriano's first full season in 2006 and he came out throwing 37.6% sliders. He followed that up by undergoing Tommy John surgery and missed all of 2007, and when Liriano came back he was not the same. He shied away from the slider and went heavy on the fastball going from 43% fastballs in 2006 to 53% in 2008. The decision to throw fewer sliders was more of a mandate from pitching coach Rick Anderson and manager Ron Gardenhire. Since departing from Minnesota, Liriano has gone back to a slider focused approach throwing 33% in 2012 and 36% in 2013. I believe it is a safe assumption that Liriano will continue to throw plenty of sliders in 2014, and will see success similar to this season.

Prior to 2013, Liriano's arsenal consisted of a fastball, slider, changeup, sinker and while he maintained a pretty even split on the number of fastball and sinkers thrown, the fastball was getting hammered - especially by righties. The graphic below shows hitters batting average against Liriano's fastball in 2011. 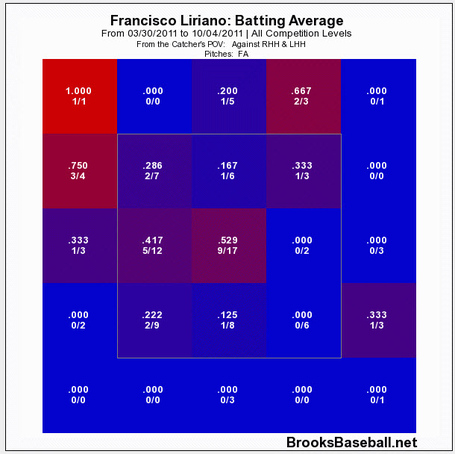 Compare this to his sinker during the same season 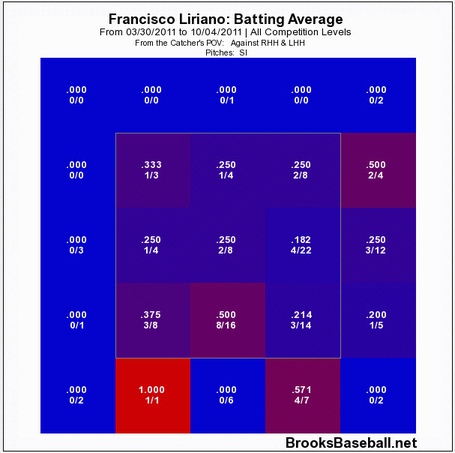 Clearly the sinker has much more success and the results are even more exaggerated when comparing against only right-handed hitters. Liriano's switch to a sinker-only approach had another positive affect by his decrease in walks. After 2 season of a 5.00+ BB/9, Liriano cut his walk rate to a manageable 3.52 BB/9. This is a result of his ability to better command his sinker and to get bailed out more frequently by swinging strikes.

Progress. While Liriano is the one player I should be recommending you be the most hesitant on given his past inconsistencies, it's hard to deny that his success this season has been a result of a very real change in approach. I believe this new approach will continue in 2014 and you should be able to buy into Liriano wherever you can get him. I will note that his increase in sliders raises a few injury flags, but I believe the cost of injury is already baked into Liriano's price. If we could be assured he would throw 200+ innings every year, he's a Top 10 pitcher. Knowing you will only get about 150 innings out of him drops his price to right around the Top 25 SP range. This is where I recommend buying him and maybe even reaching a bit as there is always the upside of getting a healthy season of 30 starts.