Recently on FakeTeams there has been an interesting debate going on regarding the 2014 value of some top OF talent. The debate has centered around Matt Kemp and Jacoby Ellsbury as Alex wrote an excellent pro-Ellsbury article (here), and Ray offered the pro-Kemp opinion (here) plus an anti-Ellsbury opinion (here). I'd like to offer my two cents in the debate, but structure it more around my drafting philosophy and how Kemp/Ellsbury fit into that strategy.

My philosophy in drafts is to secure the best assets in the most rare categories, because given the randomness of injuries I want my weaknesses to be in areas I can patch up in the Waiver Wire and hope my strengths remain healthy. This is entirely obvious, and I don't think anyone would disagree with it, so where the debate begins, is when to pull the trigger on a speed-heavy player who won't produce the power we all know is the more rare attribute (I will prove this rarity in the image below).

The ideal time to pick speed, is at the point in the draft where passing up on power will hurt you the least. This inflection point has a ton of variables in it, the most important of which is who you have already drafted. Selecting power in the 4th Round is far more crucial to the team who went Trout, Wright, Pedroia in their first 3 picks than it would be for the team who went Miggy, Longoria, Encarnacion. This is important to remember in the Ellsbury/Kemp discussion as it brings attention to fact that under certain circumstances, both players could be the better pick. However, that makes for a very boring fantasy article, so let me make the case that on average, Matt Kemp is the better pick to Jacoby Ellsbury.

This discussion begins with the caveat of Matt Kemp's injury situation and recognizing that the 50/50 candidate some were hyping in 2011 is no longer the same player. The shoulder surgery sapped his power, and while there is no real reason to suggest Kemp has slowed down on the basepaths, regressing the stolen base numbers a bit isn't all that unrealistic. So let's assume a reasonable prediction of 25 HR's and 15 SB's with a .290 AVG for Kemp in 2014. His season average between 2008-2013 (so this includes his injury-plagued 2012 and 2013 seasons) was 23 HR's, 24 SB's, and .290 AVG. These numbers are skewed down by Kemp's back-to-back poor seasons but let's consider this a hedge for the possibility Kemp never fully recovers from the shoulder surgery (it also gives us some upside if we can justify his price at the current averages and he outperforms them with a completely healthy season).

The following image plots the 2013 results for all players with 100+ plate appearances against their ADP from the beginning of 2013, courtesy of Yahoo.com. The lighter grey areas represent all players who were 1 standard deviation or higher in their respective stat, and the green colored dots are players who ranked in the Top 150 of the Offensive statistic standard in FanGraph's leaderboards (third column from the right). The red dotted line is the league average, and the black line represents the overall trend as a draft progresses. (Click image to zoom) 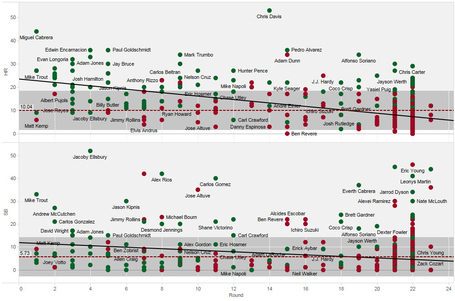 The second thing that pops out is where Matt Kemp's conservative (in my opinion) 25/15 numbers would stand. Let's say he's going in the tail end of the 2nd Round; he is a standard deviation above the average in both categories, and above the trend line for what could be expected in that given round. Ellsbury, by contrast, blows the competition away in SB, while being below league average in HR and the lowest total in his fellow 4th Round brethren. If we gave Ellsbury the same 2nd Round ADP spot, his gap in power is even wider as he's roughly 10 HR's below the next player drafted in the same round (a struggling Albert Pujols).

The last point is an important one: Ellsbury in the 4th Round, despite the forfeiture of power, isn't a bad play because you have 3 picks beforehand to load up on power while it's readily available. Spending a 2nd Round pick on Ellsbury puts a lot of pressure on a manager to find power in the next two or three picks, where it's not as easy to find. Kemp's profile, on the other hand fits right in line with other players of his round, with the additional upside of a return to 30+ HR power.

Ellsbury as a Top 24 player can work, heck even in the Top 15, I think you could make a case. The reason, I shy away from that type of pick is because of the pressure it puts on my draft strategy to select a certain type of player in the next 2-3 rounds. Matt Kemp allows me to stay flexible and maybe grab a stud pitcher earlier and waiting for a few SB fliers in the later rounds.