Max Scherzer Is Awesome: Now What?

Alex Kantecki reviews the season of Tigers' right-hander Max Scherzer and looks ahead to 2014.

Share All sharing options for: Max Scherzer Is Awesome: Now What?

Max Scherzer, who led all pitchers with 21 wins during the regular season, held Boston hitless through 5 2/3 innings and struck out a season-high 13 batters in Game 2 of the American League Championship Series, but, because postseason baseball, the Red Sox won, 6-5.

Scherzer allowed one run in seven innings, but was denied the victory after the Tigers bullpen coughed up a four-run lead in the eighth. The favorite to win the AL Cy Young -- with teammate Anibal Sanchez not far behind -- is now 2-0 with a 2.25 ERA, 0.88 WHIP and 26 strikeouts in 16 postseason innings.

Scherzer's strong postseason performance should come as no surprise, as fantasy's No. 2 starting pitcher went 21-3 with a 2.90 ERA, 0.97 WHIP and 240 strikeouts in 214 1/3 innings while setting career highs in wins, innings and strikeouts. 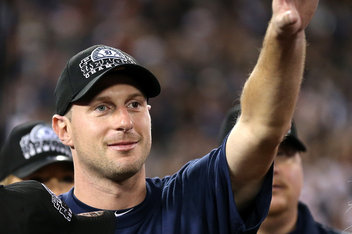 Check out Ray Guilfoyle's thoughts on the chances of the Tigers' right-hander leaving Detroit this offseason.

Only Clayton Kershaw had a better fantasy season, according to the ESPN Player Rater, but Kershaw was selected as the No. 2 starting pitcher in the preseason while Scherzer was taken 22nd and Justin Verlander was drafted first. Scherzer, based on his draft day value, was fantasy's most valuable starting pitcher.

Scherzer's breakthrough season once again proved that waiting on starting pitching is the ideal strategy, as seven out of the top-10 starters weren't drafted that way, including No. 6 starter Hisashi Iwakuma, No. 7 starter Jose Fernandez and No. 8 starter Matt Harvey. Harvey was drafted 42nd, Iwakuma was taken 64th and Fernandez wasn't even selected in the top 120.

If Ian Kennedy's 21-4 season in 2011 taught us anything, it's that expecting back-to-back 20-win seasons is foolish and irresponsible. The next season, Kennedy went 15-12 and his ERA ballooned from 2.88 to 4.02. Oddly enough, Kennedy and Scherzer were a part of the same three-way trade that landed Scherzer in Detroit. Again, expecting 20 wins from Scherzer in 2014 isn't realistic.

While Scherzer took huge strides this season, it's hard not to notice the giant elephant in the room, an auspiciously low .259 BABIP, which was the eighth lowest BABIP in 2013. Scherzer's previous low was in 2010 (.297), which, coincidentally, was his best year in terms of ERA before this season. To put that into perspective, Doug Fister came in at .332 and Rick Porcello came in at .315.

Could Scherzer repeat his 2013 success all over again? While it's certainly possible, I don't think it's likely either. Scherzer allowed fewer than 20 home runs for the first time in his career despite his fly-ball rate peaking at a career-high of 44.6 percent. And I have a hard time believing his BABIP will remain so low going forward, as his career BABIP is over 40 points higher (.302).

I'm not arguing against Scherzer's obvious growth as a starting pitcher, but topping a 21-win season again is asking a lot. This was his first year throwing 200 innings, and even though Scherzer's fastball velocity was down on the whole, it got faster as the season wore on, which is a trend that we've gotten used to.

Buying Scherzer for next season most likely means investing an early third rounder, which I'm not willing to do. He'll reach well over 200 strikeouts again, and with only 12 pitchers reaching that mark in 2013, it's worth contemplating whether or not you need to reach for a pitcher of Scherzer's talent.

For me, I'd much rather wait on a pitcher like a win-deprived Cole Hamels, who had 202 punch outs, and fill in my bats first. Starting pitching is all about value. You're not going to find the same value with Scherzer in 2014 as you did in 2013, but, if you do end up with him, he'll still be one hell of a pitcher.

Alex Kantecki also writes for Vigilante Baseball and The Dynasty Guru. You can poke him on Twitter at @rotodealer.