Starlin Castro has an argument for the most disappointing season of 2013. Forgive Josh Hamilton and Matt Kemp for they have already tasted stardom. Castro was on the cusp as a 23-year old ready to make the jump to a perennial top 25 fantasy player. Prior to turning 23, Castro had amassed a .297/.336/.425 slash line in almost 2000 plate appearances with 57 stolen bases and developing power, he had successfully captured the hearts of Cubs fans everywhere (mine included). It all came crashing down in 2013 as Starlin Castro hit an abysmal .245/.284/.347 leaving Cubs fans and fantasy owners wondering, "what does his future have in store?"

Starlin Castro's success is founded on a hand-eye coordination that is on a far superior level than most human beings. He can square the ball up in any location, inside or outside the strike zone and he does not need to patiently wait for the "right pitch". As a result of this god-given ability, Starlin Castro does not need to walk much in order to find success; evidenced by a sub 5.7% BB% in every season on the North Side. The old adage "if it ain't broke, don't fix it" applies very much to Starlin Castro and if Dale Sveum and his staff had followed this cliché philosophy he might still be managing the Cubs. The development team on the Cubs tried to get Castro to swing less at balls outside of the zone, with the intent of drawing more walks and getting better pitches to hit inside the zone. A deeper look at what's changed with Starlin Castro is required in order to assess whether 2013 was a regression in development, or simply an off year not indicative of Castro's future capabilities.

Patience at the Plate

It was a common story throughout spring training this season that the Cubs development team was going to transform Starlin Castro into a more "complete" hitter i.e. draw more walks. Starlin was to take more pitches and go deeper into counts to increase his likelihood of finding a mistake to hit. My problem with this approach is that it's not conducive to the type of hitter Castro is - a "see ball, hit ball" type. The results of this change in approach were nothing short of horrific as pitches outside of the zone that Castro used to barrel up and drive to the outfield were now being taken for balls. An argument can even be made that Castro was becoming too conservative as his swing percentage on balls thrown INSIDE the strike zone dropped 2% from 2012 to 2013. Castro was swinging fewer times then he has in his entire career, and when a player's strength is his ability to swing the bat and barrel any pitch in the same zip code; talent and value is being wasted.

These next 3 tables illustrate my point more clearly. These are heat maps displaying the percentage of pitches Starlin Castro swung at for each of the past 3 seasons. 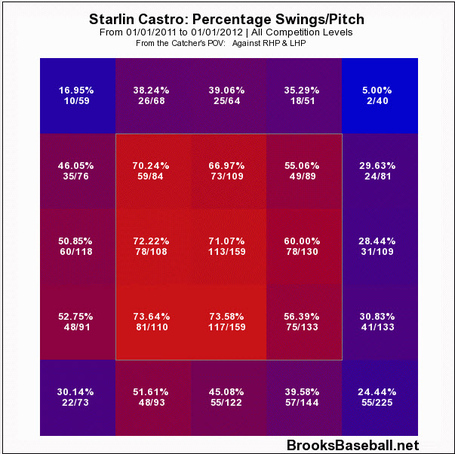 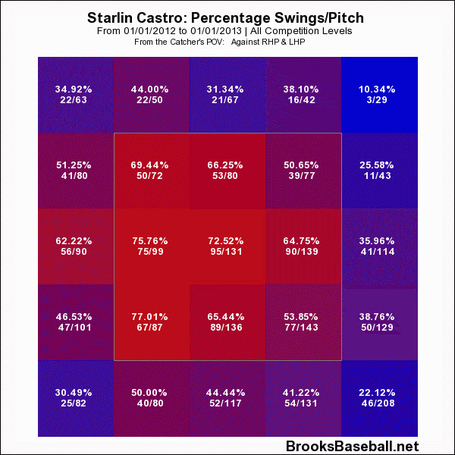 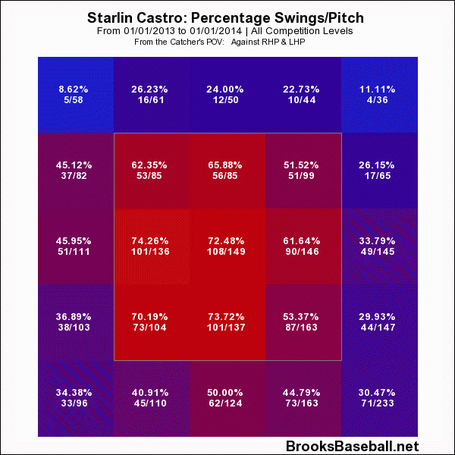 Focus on the outside portions of the strike zone. Notice how they go from red to blue as the years progress? This backs up our initial claim that Castro is taking more pitches outside of the strike zone and missing opportunities to get a base hit. As mentioned before, a dangerous side effect to this approach is the decreased number of pitches swung at inside of the zone. Castro's pitch recognition skills are not strong enough to consistently determine whether a pitch is a ball or strike. He just needs to hack away and let the bat find the ball.

Plenty has been made of supposed changes to Castro's timing and mechanics as an explanation for his struggles. I don't see much in this narrative as I think Castro has stayed relatively consistent in his load mechanism and where he starts his swing. The two pictures below illustrate my point. 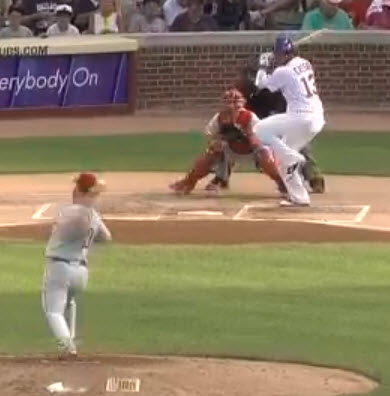 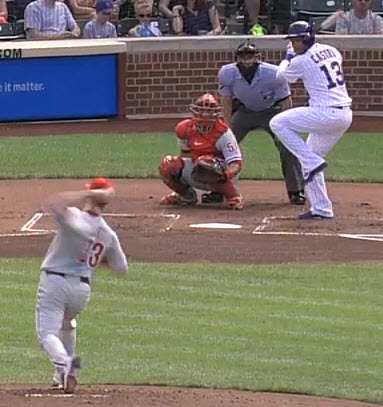 The first image is June 20th, 2011 against Cliff Lee and the second is from August 31st, 2013 against Lee as well (I was sitting in the rooftops for this game #humblebrag). Same pitcher, same park, and almost the exact same stance. The only slight difference is his hands are starting a little farther away from his body in the 2011 image, which may help Castro be a little quicker to the ball, but I'm wondering if the difference is due to a slight shift in the camera angle.

The most telling part about these two images is what happened after this screenshot was taken: both were taken before the 0-0 offering and in the 2011 image, Castro took a ball below the strike zone deep for a home run while in the second image, letting an arguably better pitch to hit on the bottom half of the strike zone, go for strike one.

I hinted at it earlier in the article, but Starlin Castro struggles with pitch recognition and nowhere is this more evident than when Castro is in a pitcher's count. Most hitters aren't successful in these spots, but Castro's numbers are downright offensive. This chart from 2013 mapping his swing% with a two strike count shows that Castro is swinging at almost anything. 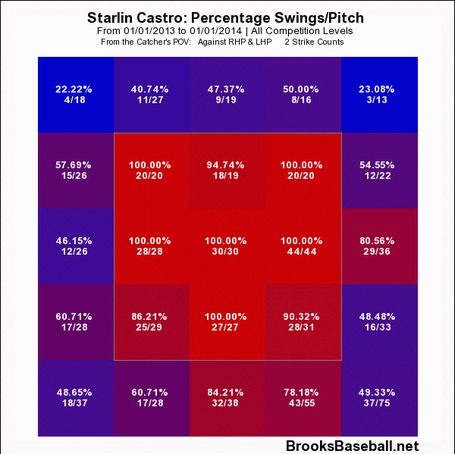 In order for Starlin Castro to find success, he needs to put himself in situations where he thrives or at least avoid the situations where he fails (#analysis). In 2011 he was doing exactly that, in 2013 he was missing the boat. The table below attempts to highlight what I mean.

The main takeaway here is that in a season where he saw less plate appearances, he put himself in far more pitcher's counts. His success rates at these counts are representative of his overall stat lines. Note the similarity in triple slash line when Castro puts the ball in play in an (0-0) count. This tells me that his skills have not diminished and his upside is still the same as it ever was, he's just not putting himself in a position to succeed.

Anyone's Guess. I've done my best to explain why I still have faith in Starlin Castro and why his ceiling has not been lowered in my opinion. His poor performance is due strictly to a change in approach that can easily be corrected. The problem comes with predicting whether the change will be made. I'm optimistic given the coaching change in Chicago and hopefully the replacement manager will support Castro's free-swinging approach, but there's no guarantee. Castro could be one of the best sleeper candidates in 2014 since there is no one riding his bandwagon any more. I'll be curious to see how far he drops, but I'm expecting Top 100 production out of Castro in 2014 and will likely end up with him on multiple fantasy rosters. Keep swinging, Starlin.