If you've followed the postseason -- and if you haven't, what in the wide world of sports is wrong with you? -- it's no surprise to see the Athletics turn to rookie right-hander Sonny Gray for tonight's Game 5 of the American League Division Series against the Tigers.

Young pitching has dominated the early part of the playoffs, from Oakland's Gray to Pittsburgh's Gerrit Cole to St. Louis' Michael Wacha. Manager Bob Melvin tabbed Gray in favor of the experienced Bartolo Colon, who was hit around in a Game 1 loss -- but make no mistake about it, Gray's swift progression to a frontline starter is the reason why the A's skipper chose the rook over the vet.

In his first career postseason start, Gray helped even the ALDS at one game a piece thanks to a dominating stat line of eight innings, four hits, no runs, two walks and nine strikeouts. Gray entered the season as Oakland's No. 5 prospect, according to Baseball America, behind shortstop Addison Russell, outfielder Michael Choice, right-handed pitcher Dan Straily and right-handed pitcher Brad Peacock. 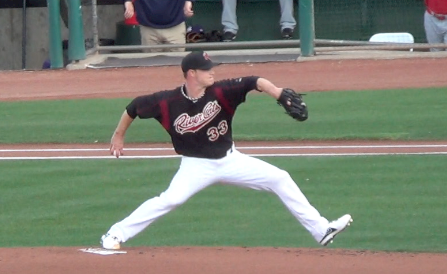 Check out Jason Hunt's profile
on Gray from earlier this season

While Straily was shuttled back and forth between Oakland and Triple-A Sacramento and Peacock was traded to Houston for Jed Lowrie and struggled mightily with command, Gray calmly and coolly outpitched the competition. As a starter, the 23-year-old went 5-3 in 10 starts with 2.85 ERA, 1.13 WHIP and 61 strikeouts in 60 innings.

So the question for fantasy owners becomes: What will Gray do in a full season's worth of starts in 2014?

I'm usually very, very cautious when it comes to young pitching in my fantasy leagues. I laugh when owners keep unproven starters with little track record -- or sometimes no major league experience whatsoever -- over veterans with proven years of success, but this year's young crop of pitching has me changing course on my assessment of young pitching, and young starters in general.

Before getting called up, Gray went 10-7 in 20 starts with a 3.42 ERA, 2.74 FIP and 118 strikeouts in 118 1/3 innings in Triple-A. He features a four-pitch arsenal -- if TBS tells you otherwise don't listen to them -- that includes a curve, a slider that's essentially a second curve (h/t Eno Sarris) and a changeup he uses sparingly in addition to a four-seamer that sits in the 93-94 mph range -- although he did reach 97 in Game 2, according to Brooks Baseball.

Gray's 2.67 ERA was not luck driven by any means; he had a 2.70 FIP and 2.97 xFIP and didn't rely on Oakland's spacious dimensions to get the job done. If he qualified, Gray's 27.6-percent fly ball rate would have been the 11th lowest in baseball. There are some advanced metrics that work against Gray, however, starting with a league-average 9.5-percent swinging strike rate. He also induced a pedestrian 22.8 percent of swings on pitches outside the strike zone, which could point to his secondary pitches needing a *little* more work -- emphasis on little.

The only thing I caution Gray owners is that his strikeout rate may dip below nine Ks per nine next season. Pitching forward -- meaning getting ahead with the fastball and then putting batters away with his best whiff-pitch, the slider/curve -- could lead to opposing batters attacking the fastball early, which is what I anticipate the Tigers doing tonight. But, to be fair, Detroit sat on the fastball in Game 2 and still couldn't hit the darn thing -- it's that filthy with movement.

Overall, everything points to Gray, a pitcher with no past home run problems and an ideal pitching environment, sustaining a frontline starter's arsenal. Maybe he's not a true No. 1, but he's not far away either. His value could skyrocket with even more postseason success -- starting tonight -- and he's the perfect complement to an ace like Clayton Kershaw or Adam Wainwright.

There will obviously be some adjustment periods coming from both batters and Gray in the future, but Oakland's No. 1 is already ahead of the curve and I expect him to stay there.

Alex Kantecki also writes for Vigilante Baseball and The Dynasty Guru. You can poke him on Twitter at @rotodealer.