Paul Sporer tells us why Homer Bailey is finally making good on his once lofty expectation and whether he can carry them into 2013.

Improbably, there are many other fantasy writers out there besides the ones you see on a regular basis here at Fake Teams. Today's guest post comes to you courtesy of Paul Sporer, who you can find both as a regular contributor to Baseball Prospectus and at his own site, PaulSporer.com. At his personal site, Paul puts together a yearly SP guide which is the most comprehensive of its kind on the internet - and you can read more about it here. If you're into fantasy baseball podcasts, it's absolutely worth checking out the one he does with Jason Collette at BP called "Towers of Power Fantasy Hour". You can also find him on Twitter at @sporer.

There is no truth to the rumor that Homer Bailey was given that moniker because of his propensity to allow longballs. It’s merely a coincidence. Like how Grant Balfour had a 5.6 BB/9 through his first three seasons as a major leaguer. Bailey has been above league average in HR/9 for three of his first four seasons and even the year he found himself on the right side of the ledger, it was by the faintest of margins. He posted a 0.91 rate in 2010 against a 0.97 rate for National League starters.

The gopheritis was masking his improvements a bit, saddling him with an ERA around the mid-4.00s for three straight years before 2012. It wasn’t the only culprit, but a rising flyball rate combined with the tendency to allow homeruns is never a good thing. If you look at his last two years, you will see that they are virtually identical yet his ERA dropped three-quarters of a run. How did that happen and why do I like him so much for 2013?

Bailey curbed his propensity for truly awful starts in 2012 while also making the most of his career (33). It doesn’t take a rocket scientist to see how beneficial that can be to dropping an ERA. In his first three seasons where logged quality innings samples (100+), he had what I call an implosion start (five or more earned runs) in 23 percent of his starts (14-of-61). Five may seem like an arbitrary number and to a degree it is, but my thinking is that even if you finish the game somehow, a 5.00 ERA is ugly.

In 2012, he had just five implosion starts, or 15 percent of his 33 outings. He also cut down the damage from his worst outing of the year. Last year he had a nine earned run shellacking that did a number on his ERA (accounted for 14 percent of his total earned runs), but this year his worst outing was six earned runs. Everyone is going to have a bad outing (Justin Verlander had an eight run disaster last year), but mitigating the overall damage helps stem the tide on a poor composite ERA. Bailey isn’t Verlander so he will have trouble recovering from an eight earned run outing. Whereas Verlander put up a 1.93 ERA in his next six starts.

From 2009-2011, Bailey had 62 percent of his starts (38-of-61) against opponents with a winning percentage under .500 and yet he posted just a 4.36 ERA and 1.37 WHIP against them which wasn’t too far from his 4.66 ERA and 1.37 WHIP against those with .500 or better records. In 2012, he finally took full advantage of his competition making hay against the weaker set with a 3.36 ERA and 1.21 WHIP in 17 of his 33 starts. It should be noted that he more than held his own against the better competition, too, with a 4.03 ERA and 1.27 WHIP in his other 16 starts. In fact, his 7.5 K/9 and 3.4 K/BB marks against the tougher teams bested his 7.1 and 3.1 marks against the lesser foes. His ability to take advantage of weaker competition as well as his improvements against tougher opponents outlines his advancement as a pitcher. We hear often about thrower vs. pitcher; Bailey is transitioning into the latter and paying dividends on his status as a four-time top 50 prospect (including 5th and 9th in 2007 and 2008, respectively).

Another significant difference for Bailey was his batted ball profile. He set a career-high with a 45 percent groundball rate, up from 40 percent in 2011, and he pulled the bulk of that from his flyball rate going from 38 to 35 percent. Perhaps even more importantly was that his profile changed greatly at home. Great American Ballpark is known as a hitter’s haven so someone with homerun issues isn’t exactly a great fit, but Bailey took his groundball rate up 10 percent to 47 percent at home dropping his home flyball rate by four percent to 35 percent. This is another aspect of his game that underscores his transformation into a refined, mature pitcher.

Simply repeating 2012 would be great for Bailey. His performance made him the 35th rated starting pitcher on ESPN’s Player Rater last year and he isn’t being rated that highly in the 2013 materials that have become to come out. Bret has him #38 while Craig has him all the way at #80, so the opinions will vary greatly on him presenting an opportunity for value. I think there is another level to his strikeout rate on par with his 2009 rate (8.3 K/9) because as the great Ron Shandler told us many years ago, "once you display a skill, you own it" so it is in Bailey’s arsenal.

His fastball averages 93 MPH, 24th in the majors last year. That includes his sinkers, though, which is more of a 92 MPH pitch. According to Brooks Baseball, his four-seamer is 93.3. That said, I’m not entirely sure it raises him up the ladder because several of those 23 ahead of him on the Fangraphs chart likely have sinkers built into their number as well. The point is that he throws hard and he’s slowly adding swings-and-misses.

The next big step for him is improving his command within the zone so that when he misses his spot, it’s not a fat pitch ready to be clubbed over the fence. He’s most effective against righties low-and-away and 84 percent of his 18 homers against them were middle-in. 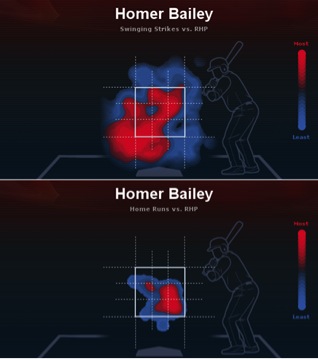 Considering the fact that he gave up 70 percent of his home runs to righties, this should be an area of opportunity that Bailey and the Reds staff is focusing on because fixing it even incrementally can greatly improve his numbers.

I see at least more of the same from Bailey in 2013. He has 340 innings of the same skills over the last two years and improved his results with those skills from 2011 to 2012 so there is no reason he can’t do so again in 2013 with the figure above showing one way he can immediately improve. He has raised his floor yearly showing more and more development as he accrues major league experience. The reason I like him so much as a buy candidate is because there is upside within the profile to go with the continually rising floor.