A pair of relief pitchers entered spring training competition with an eye on making the jump to the starting rotation. Then, a funny thing happened on the way to Opening Day. The pitcher who struggled with command has been penciled into his rotation, while the pitcher who showed a nifty touch around the strikezone has been exiled to the bullpen.

We start in Boston, where Daniel Bard was attempting to fill a void in the Red Sox rotation. Bard has been a serviceable fantasy reliever the last couple of seasons. No, he wasn’t closing games, but in deep leagues his 2.62 ERA, 0.98 WHIP and 9.1 SO/9 over the last two seasons certainly provided value in the relief corps. Like every member of the Red Sox staff, he closed with a miserable September, surrendering 13 runs over his final 11 innings of work with 9 walks.

My take on a pitcher like Bard, who spent the spring trying to prove himself worthy as a starter to the Red Sox brass, is we should pay close attention to his spring numbers. He’s trying to prove his worth as a starter. Sure, in the big picture, they may not mean much, but he needed to exhibit decent command if he could be counted on to make the jump to the rotation. Bard appeared in six Grapefruit League games and made five starts. Overall, he threw 24.2 innings and finished with a 6.57 ERA and a 1.50 WHIP. Yikes. OK… Let’s acknowledge we’re looking at a small sample size here. One game where he was roughed up, he entered in relief and also dealt with a rain delay. Besides, Bard hasn’t had what you would consider a good spring since 2009. Whatever. It’s spring. Weird things happen.

Except in the case of Bard, there’s something in his stat line that gives pause. His strikeout to walk ratio was a rough 1.21 SO/BB. In those 24.2 innings, he struck out 18 batters and walked a whopping 16. Let’s take a look at the strikeout totals first.

Bard has whiffed an average of 9.7 SO/9 since joining the Red Sox bullpen in 2009. In his first year, he posted a stratospheric 11.5 SO/9 before feeling the pull of gravity. He punched out 9.16 SO/9 and 9.12 SO/9 in each of the next two seasons. Naturally, we would expect those numbers to take a bit of a dip with his transition to the starting rotation. He’s going to have to pace himself for a seven to eight (or nine) inning marathon as opposed to a single inning sprint. With healthy regular season strikeout numbers, and with the small sample of spring, it looks good that he whiffed 18 in just under 25 innings. So far, so good.

But those walks. Yeesh. He struggled with command last September and it looks like it's still an issue.

Bard has always featured what we would call mediocre control. With a career 3.5 BB/9 coming out of the bullpen, it’s a solid, if unspectacular mark. This spring though, he’s completely lost his touch and finished with a 5.8 BB/9. Now this is one of those spots where I cherry-pick a statistic. Because of the circumstance where he was auditioning for the Red Sox rotation, those walks matter. And they matter because it wasn’t like he had one bad outing… He walked at least three batters in each of his last four appearances this spring. He was consistenly inconsistent when it came to the strike zone.

Command issues aside, the Red Sox decided to pencil Bard in the back of the rotation as the fifth starter. Since turning pro, he’s topped 75 innings in a season exactly one time. That was back when he was still a starter in his first season split between A-ball and High-A in 2007. And even then, he threw exactly 75 innings.

Under the best of circumstances, Bard would qualify as a "sleeper." However, his position in the back of the rotation, his spring command issues and what looks like workload concerns make him a risky play for your fantasy rotation. Bard’s not just a sleeper… He’s the Rip Van Winkle of fantasy starting pitchers. He would provide more value for your team if he was in his old role in the bullpen.

Meanwhile, another reliever being groomed for a starting role, Aroldis Chapman was the anti-Bard this spring. In five games (and four starts) the lefty flamethrower went 17 innings and struck out 18 batters against just two walks. He held the opposition to a .262 batting average and posted a 1.12 WHIP with a 2.12 ERA.

Chapman was dogged by control issues last summer, issuing 41 free passes in just 50 innings of work. He was slated to pitch in the Arizona Fall League to build his arm strength and work on his control, but a sore shoulder short-circuited that plan. Coming into the spring, he was a huge question mark, but his efforts last month cannot be ignored. In his audition for the rotation, the Reds asked (or was it begged?) Chapman that he get his location under control. And by rolling out a 9.0 SO/BB ratio, he exceeded expectations.

As in the case of Bard, velocity and stamina would certainly be an issue in the switch from the bullpen to the rotation. We all know about Chapman’s electric fastball. It averaged a radar-popping 99.6 mph last year. We also know that Chapman has been a starter for his entire career before defecting to the United States. This transistion shouldn’t be a huge deal for him. Fortunately, one of Chapman’s spring outings was tracked with PitchF/X data. In his start on March 24 against the San Diego Padres, Chapman went five innings and threw 78 pitches. From Brooks Baseball, here’s his velocity graph for that start: 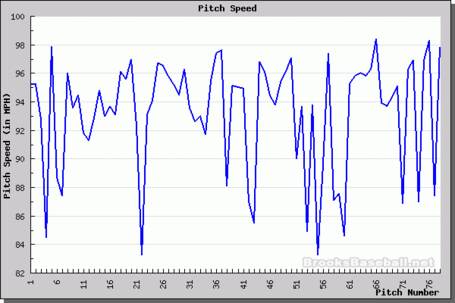 His average fastball in this start was 96 mph with the top speed of 98.4 mph. It’s not what he was throwing last year coming out of the bullpen, but it looks like he did a heckuva job pacing himself for his 75-plus pitches. He’s sacrificed a bit of velocity for improved command, and he’s introduced a split-fingered fastball that has a ferocious bite and clocks in around 93 mph. PitchF/X has it classified as a change-up, but that’s like saying Kate Upton is mediocre. That's wrong. It’s a splitter.

So with Chapman dominating the Cactus League and the Reds on the hunt for another starter, this seemed like an easy decision. So the Reds will open the season with Chapman in the bullpen. Wait, what? And with Sean Marshall slated to close games for the Reds, Chapman finds himself again in the pitcher purgatory of middle relief. Hopefully, you have the arms on your staff to ride out what should be a temporary reassignment. Where he ends up is anyone’s guess, but scenarios now exist where he could either start or close. Hopefully, the Reds won’t drag their feet and will soon drop him in a role where he can help your fantasy team.