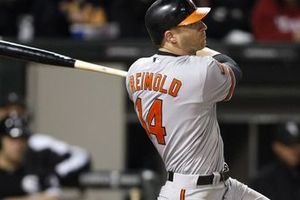 Welcome to the fourth FAABwire series for the 2012 season. This article will cover the top pickups of the week and how much FAAB (Free agent acquisition budget) you should spend. The FAABwire series is mostly catered to twelve and fifteen team mixed league formats. Each week I will mostly focus on players that are owned in under thirty-four percent of CBS leagues. FAAB bids are of course very specific to individual leagues, so I will give you ballpark bids of what it should take to acquire each player based on a one thousand dollar budget. Throughout the week, feel free to tweet players at me that I can discuss is the column. @MarkusPotter

The truth of the matter is that no one can possibly know how Trout will perform this year, but if there is any prospect to invest in, it's Trout! As with Harper, I will expect to be outbid if he is available in your twelve-team league. With that said Trout could get off to a hot start and be a difference maker. I cannot fault anyone for unloading your budget on him, but I am not willing to do so just yet.

Jordan Walden was removed from the closers role after giving up a walk off home run to Brandon Allen. Now at thirty six years of age, southpaw Scott Downs will now take over in the ninth. Mike Scioscia did hint that Walden could make quick fixes to his game, but for now Downs will be the guy. "When he gets his stuff right, his stuff plays in the closer spot," Scioscia said. "But he needs to get it right first, and that's what we'll work toward." Now to the new closer: Downs induces an elite level of ground balls at around sixty percent. The strike-outs are down over the last several years, but Downs does have the skill set to succeed in his new role. Nobody knows how long he will have the job, but I would make a bid with the expectation that he keeps the job for a month. There is upside that Downs could keep the gig all year. He's off to a perfect start notching the save last night!

The legendary Cory Schwartz was touting The Pirates outfielder since last September, and so far the left fielder has quietly been producing, hitting .303 (23-for-76) with a home run, three stolen bases and nine runs scored over his first nineteen games. Presley is likely owned in most fifteen team leagues, but he may still be available in twelve team formats. This is a player projected to hit double-digit home runs and steal twenty plus bases hitting for a solid average. In 2,300 at bats in the minor leagues, Presley had a slash line of .291/.345/.435, with seventy eight stolen bases.

I have been the frustrated owner of the former Dodger prospect for years now in the FantasyPros911 dynasty league. The McDonald ride can be a frustrating one, but I am hopeful that he can find some consistency. McDonald was a pre season sleeper of mine and looks like he could finally turn a profit. Run support from the putrid Pirates offense will lacking, but his ERA, WHIP, and strikeouts should help fantasy owners in fifteen team leagues. McDonald has given up two earned runs and four hits with four walks over his last 11 innings, and is a two-start pitcher this week facing the Braves in Atlanta then the Reds and home. McDonald's price tag has already risen after his last performance against the Rockies where he struck out eight while only giving up one hit and three walks in seven innings.

In last weeks FAABwire I talked about holding on to Matt Thornton. The former top Whitesox prospect Addison Reed is also a must own. The great Rich Wilson has Reed for quite some time now and for good reason: he hasn't allowed a run in 7.3 innings this season. He has allowed just four hits, while striking out ten and walking just two. Hector Santiago is still the closer, but his mercurial performances are just holding down the fort at this point.

Craig is on a the brink of a rehabilitation assignment, and should be back with the Cardinals very shortly. The question mark for Craig has been playing time, but the entire organization loves the 2011 world series super hero, and he should have no problem finding at bats this year. All reports indicate that he is fully recovered and ahead of schedule after offseason knee surgery. This is a player that could hit twenty home runs and steal ten bases in six hundred at bats.

The Phillies are trying to score runs in any way they can right now, (and for now) Juan Pierre seems to be part of the solution. John Mayberry Jr. was tabbed to be the everyday left fielder, but hasn't done much yet with the opportunity. Pierre has been starting everyday hitting .333 with three stolen. Manager Charlie Manuel has said several times that Pierre has earned playing time and will continue to get the majority of the starts. Pierre may not last as an every day player, but for now ride the wave in twelve team plus leagues.

With Marlon Byrd being traded to Boston, Campana has been filling the void in center field. Simply put, this kid can RUN. Brett Jackson is believed to be the center fielder of the future, but has been a disappointment thus far at triple-A. Campana does not have any power, but has an elite stolen base success rate, stealing twenty four bags in twenty six attempts last year for the Cubs. In the minor leagues, he has 152 stolen bases in 326 at bats. Campana isn't starting every day but is entering games daily as a pinch runner. Could this be Dee Gordon light?

With Chris Narveson out for the year, the Brewers are turning to the 28-year-old right-hander. Last year Estrada had an 88/29 K/BB ratio over 93 innings. Saturday against the Rockies he struck out nine, giving up zero walks, two hits, in five innings. Estrada should be picked up in fifteen team leagues. He is a strong upside play and has the skill set to last.

Does anyone know what is wrong with Heath Bell? I don't. But he has had a string of ugly blown saves. Edward Mujica has a rocky start to the season but clearly seems to be next in line to close out games. If you are in the market for saves, this is a must add in fifteen team leagues. Mujica is returning from a hand injury and also had a shaky start to the season, but if Bell continues to struggle, Mujica could find himself pitching in the ninth. The twenty seven year old has elite control, and has induced a solid ground ball rate north of forty five percent since 2010. Given the opportunity, Mujica should be successful in the ninth.