Share All sharing options for: I can't quit Brandon Morrow

Everyone has one… That one player you can’t resist in fantasy baseball. The player you keep coming back to, again and again. Hopeful that your dedication finally pays off with an award-winning season.

For me, that player is Brandon Morrow.

I’ve been on the Morrow bandwagon for the previous two seasons. Hell, at this point it’s entirely possible I’m driving the thing. He’s been my top pitching fantasy sleeper for each of the previous two seasons. I would have gone for three in a row, but it doesn’t seem right to continually list a guy who punches out over 10 batters per game a "sleeper." Despite the strikeouts though, he’s still not a guy who lights up the fantasy radar. Mock Draft Central has his ADP at 179. That’s below Hiroki Kuroda but just ahead of Wandy Rodriguez.

Unfortunately, the fact I still considered him for the sleeper tag points to someone who continually disappoints. And that’s Morrow in a nutshell. Fantasy heartbreaker.

He’s the guy who just hasn’t been able to reach - or come close to - his ceiling. The last two seasons, he’s posted an xFIP in the vicinity of 3.50, yet his ERA was an unseemly 4.62.

The silver lining is the fact that over those two seasons, his K/9 rate is an astronomical 10.53. The dude is a strikeout artist. He’s the only starter the last two years to have a double digit strikeout rate. In fact, the next closest to Morrow atop the leaderboard is Clayton Kershaw and he’s more than a full strikeout behind. If you’re in an AL only league, the next closest is Jon Lester who is at 9.17 K/9. It’s the strikeouts that point to fantastic breakout potential.

The flip side is, if I’m being honest, the walks have been holding Morrow back. He issued over four free passes per nine innings in 2010. He cut his rate last season, but it was a still lofty 3.5 BB/9. At least the decrease in walks meant his WHIP was finally below league average at 1.28.

To summarize his last season, he continued to strikeout hitters at an outstanding rate, cut his walk rate, kept the ball in the yard for the most part (1.05 HR/9) and stranded just over 65 percent of all base runners. Yet his ERA was still a lofty 4.72.

The peripherials continue to point to that breakout season. Yet...

In Morrow’s first start of the season on Saturday against the Cleveland Indians struck out just three batters in seven innings of work. Interesting. In 56 starts over the previous two seasons, Morrow struck out three or fewer batters in just five starts. Other numbers from his start look somewhat promising. He carried a no-hitter into the fifth inning and lost both his no-no bid and his shutout following a two out error by his catcher J.P. Arencibia when he surrendered a home run to Jason Kipnis. He didn’t allow another hit in his seven innings of work and the error ahead of the home run meant both runs were unearned. Aside from the dip in strikeouts, a strong opening start.

Except there is one little thing that was overlooked in the potential for the no-hitter… Morrow’s velocity was down. Way down. Since joining the Toronto rotation in 2010, Morrow’s fastball has averaged around 93.5 mph. On Saturday, he averaged 91.9 mph. In fact, his top speed all game was 93.8 mph, which was his average speed for the entire 2011 season. The following chart from Brooks Baseball neatly illustrates his dip in velocity compared to his previous starts. 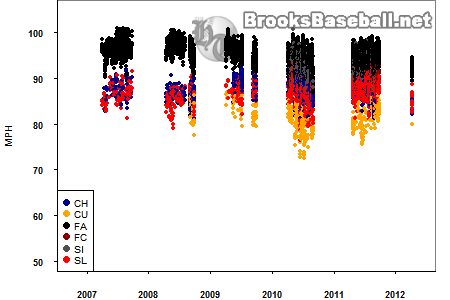 According to the Pitch F/X data collected on Saturday, Morrow’s fastball lacked it’s normal horizontal "tail." That's likely a residual effect from the decline in velocity. Ultimately, he left most of his fastballs on the third base side of home plate. From Texas Leaguers, here’s the strikezone plot for the fastballs in that start.

It's an interesting chart. I’m sure some of that was by design as the Indians lineup is almost exclusively left-handed. Despite the decline in velocity and the strangely consistent location, Cleveland hitters still couldn't square up and ring up the base hits. Yet he wasn't missing bats. The pitch to contact gambit isn't going to help him lower his ERA. And it's obviously going to put a massive dent in his strikeout totals.

Still, it's just one start. But the decline in velocity and the location of his fastball is something to be watched over his next couple of starts.

I’ll be watching… And hoping.