Who Will Close In Kansas City?

Share All sharing options for: Who Will Close In Kansas City?

Royals closer (and former fantasy stud) Joakim Soria stumbled through a miserable 2011 season. In 60 innings he posted a 4.03 ERA with a 1.28 WHIP - both numbers represented the worst marks of his career. Shut down in September, fantasy owners hoped an extended off season of rest would be the tonic for what ailed one of the best relievers in the business.

Sadly, that wasn’t the case. He had been battered around this March even before last week when he left a spring training contest with elbow pain. An exam revealed ligament damage and next month he will go under the knife for his second Tommy John surgery.

With Soria on the shelf for the entire 2012 season, the Royals have bullpen depth to pick up the save opportunities. The race for the Roayls closer will go down between former All-Star Jonathan Broxton and relative fantasy newcomer Greg Holland. Naturally, the question for fantasy owners is: Who will get the save opportunities?

Let’s start with Broxton, who is coming off of injury issues of his own. His last major league appearance was on May 3 when he coughed up a pair of earned runs that saw his ERA balloon to 5.68 with a 1.89 WHIP. Ugh. Placed on the DL, he was finally diagnosed with bone spurs in his elbow after repeated rehab setbacks. Surgery followed in September and he was signed by the Royals to a $4 million contract last winter after becoming a free agent.

Broxton has thrived by throwing pure, premium gas. From his appearance as a rookie in 2006 through mid-2010, his fastball averaged between 96 and 98 mph. By the time he was shut down Broxton was having a difficult time averaging 91 mph. It was like his arm traded in a Ferrari for a Yugo. So the question surrounding Broxton this spring was, could he regain some of that lost velocity post-surgery?

Early returns are encouraging. From the chart courtesy of Brooks Baseball, we see that while Broxton isn’t all the way back to his pre-injury velocity, he’s pretty darn close. This spring, his fastball has averaged 95 mph. Tantalizing. 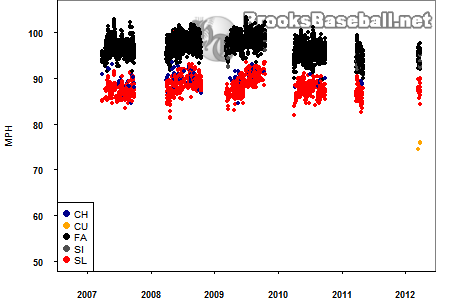 It should also be noted that this spring, Broxton is generating a swing and a miss on 36 percent of his fastballs and sliders. Obviously, we’re dealing with a small sample size of pitches in this situation, but it’s worth noting that Broxton has gotten the batters to offer - and miss - at his fastball roughly 24 percent of the time in his career. Sample size, be damned, this is a positive development.

Moving on to Holland, last summer he generated a swing and a miss on 16.6 percent of his pitches - a rate not even Broxton has reached in his career. Holland also posted an 11.1 SO/9, which was the second time in as many seasons he punched out more than 11 batters per nine. With a 1.80 ERA and 0.93 WHIP, Holland was the best pitcher on a team with a very strong bullpen.

What makes Holland so effective is his out pitch which is a phenominal slider where both left and right handed hitters have a difficult time making contact. You can really see how he uses it to his advantage against right handed batters as it sweeps down and away. Against lefties, he sets them up with fastballs away and then runs the slider in toward the batter for an effective one-two punch. 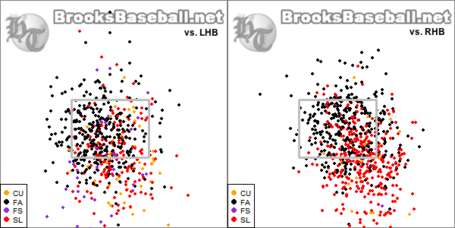 So who will close games in Kansas City? Both relievers look well positioned for a successful season. Broxton is the veteran. The two time All-Star with 84 career saves. Meawhile, Holland is the up and comer. The young guy who made his bones as the understudy to the established Soria for each of the last two seasons. If you’re looking at spring stats, Broxton’s 1.80 ERA and six strikeouts and two walks in six innings would seem to have the edge over Holland’s 5.19 ERA. But he’s whiffed 12 batters (with just one walk) in 8.2 innings of work.

While there’s a true youth movement underfoot in Kansas City, they do like the occassional veteran security blanket. (See Francoeur, Jeff.) And in the past the Royals have placed a great deal of emphasis on their closer. That - along with is a stronger spring performance - is why I think Broxton will win the job just before the regular season starts with Holland inserted to the set-up role. Having said that, the Royals will continue to use Broxton with care - especially in the early going. Holland will cherry pick some saves for sure if the Royals are in the position to win a few close games in a row.

Bump Broxton a notch or two on your draft lists. However, keep an eye on Holland as well. Even if he doesn’t collect the lion's share of saves, he’ll be a quality arm to add to bullpen depth on your fantasy roster. And if Broxton should falter - or land on the DL again - Holland would be considered the next in line.