Going Deep: Why You Should Never Rebuild

Share All sharing options for: Going Deep: Why You Should Never Rebuild

I don't care what type of league you're in, a full scale rebuild is an unnecessary process. I know what you're thinking, there's got to be a catch, and you bet your ass there is. There's no point to rebuilding, it's a waste of time. It's all about reloading. I've come to hate that term recently, mainly because it's been misused by bad teams who sign crappy players and make a half-assed attempt to impress their fans. And The Matrix: Reloaded was decidedly mediocre.

So feel safe knowing that I'm not referring to constantly adding veterans at the price of your future studs or some foolishness like that. There will likely come a time when your team just isn't going to compete. I get it. I've been there. But what I'm advocating for is trading and drafting for value NOW as well as the future. I am going to use the 20-team dynasty league I play in, and more specifically my team as an example. This league has 25 man rosters and 22 keepers per season as well as a 15-man minor league rosters (though they were at 13 when I took over).

See my theory play out after the jump:

When asked to take over this team in the winter of my discontent 2010, I originally said "yeah I guess if you need someone and can't find anyone else, I can do it." Nine minutes later I received an email regarding my entry into the league and what my team looked like heading into the 2010 season: 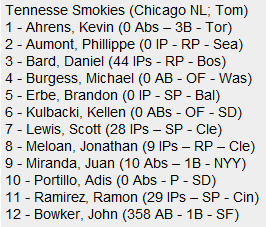 This team had finished 18th out of 20 in the league, and had a few decent pieces but not a ton to work with. My (inherited) strength was pitching (and Carl Crawford), which I believe to be the easiest to replace. I was less than thrilled. The minor league roster was more neglected than District 12 and worse yet, I had no Katniss Everdeen. Knowing this team was already in the hole, so to speak, I had no qualms gutting it in favor of acquiring players that would better fit my timeframe for competing. This meant dealing Crawford, Gonzalez, Nolasco, Bourn and others.

This certainly gives the impression of a full scale rebuild, but that was never what I truly intended. I planned to acquire as much talent as possible, both at and below the major league level. You don't have to play in a league this size to realize the importance of roster space, and that means not just acquiring prospects 3 years away from the majors, but people that can help NOW as well. I understand the concept behind punting the season, getting the higher pick and going from there. I do believe in real life that if you're not winning 90, you might as well lose 90. But this isn't real life. We don't play fantasy baseball JUST to win. We play to win...and have fun! Yes, mostly to win, but trust me, it's not fun sitting through a season where you don't care about the team and are expecting to lose week in and week out. I won't lay out every trade I made, but here are the key ones:

I send: Mike Pelfrey, 3rd round pick For: Martin Prado, 2nd round pick

The first three trades happened in the offseason, with the second two happening by the end of May. It's a bit of an eclectic collection and I could hardly say I won all those trades. Obviously, Brandon Wood worked out swell, but almost everything else is dicey. My thoughts were to acquire high upside players (Wood, Moore, Jennings, Borbon) as well as some solid contributors (Prado, Ross) and some veterans who were coming off down years but had been moved to favorable situations (Beltre to Boston, Guerrero to Texas). The plan was to then move Guerrero and Beltre mid-season once they posted favorable numbers. Beltre was my biggest non-prospect get because third base in a 20 team league is a bitch to fill. Some mid-season trades that changed the landscape of my team:

Glaus I had picked up in the draft and believe it or not he actually performed well to start 2009, and I was looking to move him as fast as possible. This is a highly effective strategy. You don't need to go for the high upside guys all the time just because you're not competing. Take those late career vets that still have some juice left and trade them to a team that needs them. I targeted another functional piece in McGehee, with the real prize being Minor. I also flipped Vlad as I had intended for another productive veteran who I felt was undervalued and a top prospect. Willingham was yet another useful piece that I thought was undervalued and I was able to pick him up fairly cheaply. Lee was moved to restock the farm system and I received far more than I gave up for him. I also drafted Dustin Ackley, Shelby Miller and Jared Mitchell with my minor league draft picks.

These and a few other minor moves resulted in a 14th place finish and in my team looking like this by off-season 2010-11: 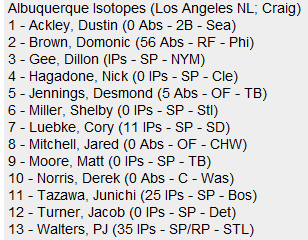 I shouldn't overlook the fact that I was fortunate enough to get Ackley at pick #3 in the minor league portion of the draft, which never should have happened. Certainly 14th is nothing special, but it was a solid improvement AND I had produced a much brighter future at the same time. By acquiring NOW talent in addition to high upside minor league players, I was able to keep other teams interested in my roster and constantly peddle those players that were currently performing to teams that were contending and needed a late boost. After drafting Jonathan Singleton, Nick Castellanos, and Christian Yelich in the draft, I found myself impatient and unwilling to wait for my prospects to mature (sense a theme?) and to aggresively acquire young, but major league ready talent. Here's how I did:

This was the point at which I started converting the volume and value I had accrued in the past into young major league ready talent. The obvious miss in this is the deal for Dunn/Lee, which I made thinking that Dunn would rebound and provide some power to me in my playoff push. I ended up missing the playoffs by half a game, but still managed to create a solid staff and a nice young nucleus, while still retaining a well stocked minor league system. But it should also be noted that by trading David Ortiz, I was essentially able to trade Vlad for Turner, Santana and Jackson...plus the production Ortiz gave me. Not bad at all. My 2011 season ending roster looked like this: 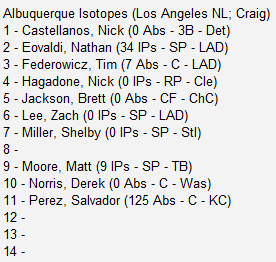 I've made some moves since then, looking to convert some of my excess major league roster space into minor league talent with an emphasis on that talent being close to the majors:

I sent: Seth Smith, 2nd round pick For: Jerry Sands, 1st round pick

Obviously the big move here is moving Miller. I felt I had the pitching depth to spare and was really looking for a young CF who could help me right now. Rasmus is a volatile property given his rough 2011 season. I was supremely happy to acquire Wil Myers- someone I had been aiming to draft at the time, though I paid a price for him with two pieces I had anticipated contributing to my 2012 campaign. Torres was a side piece that I moved for a much needed second closer. I went through my 2012 minor league draft in detail in previous articles so I won't detail it now, but here is my resulting team: 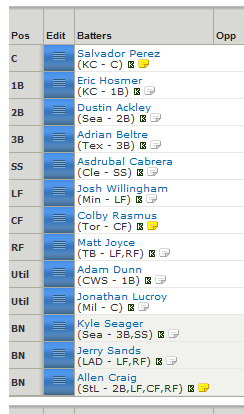 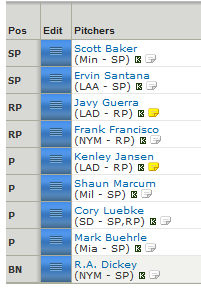 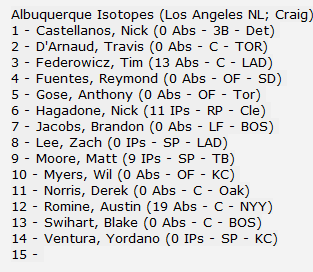 So that's my team now. I'm pretty happy with the state of both my major league roster as well as my farm system. I have a solid mix of immediate value and a bright future given my prospects/young players. I haven't always made great trades as you can see for yourself. The major point I want to make here is that by not limiting my targets to high upside but risky talent from the get go, I both improved my team from an 18th place finish to 9th place (and barely missing the playoffs), but also maintained my interest in each season without becoming a leaguewide doormat.

Aside from being one long pat on the back for me, I hope that this can serve as a template for reloading instead of rebuilding. There's certainly more than one way to assemble your team, and this is the one that worked for me. If you have the patience to sit through a season (or more) waiting for your players to reach their maximum potential...more power to you. If you're impatient like me, then maybe give this a try and see how it works. I hope this will be helpful to you and your fantasy team, or at least to pass some time at work. I promise this is the last you'll hear of this league, and I'll go back to reviewing prospects for your reading pleasure. Hit me in the comments with any advice, suggestions or reasons this theory sucks.