One of my great flaws during a fantasy baseball draft was getting too caught up in the details. Yes, I was the guy that took 89 second out of every 90 second pick, belaboring each selection as if I was going to have to spoon feed it, change its diapers, and save for its college for the rest of my life.

So what I like to do now is get all granular in my planning stages and then simply turn that into a one-line note in my draft sheet as a reminder - a summarized thumbs up or thumbs down, if you will.

While I typically get more geeky on value picks or players towards the middle and end of the drafts, I'm going to focus on Felix Hernandez today as I've seen some interesting analysis on him recently, so I figured it was high time to register my one liner on him.

Now, I don't recall a draft in the last five years where I've taken a starter before the 6th round, and heading into 2012, it's obvious that King Felix is being targeted right around the beginning of the third round, so I'm not planning on securing his services again this year. But should he hang around into the latter part of the third or (gasp) early fourth round, I might be tempted to bite as I think Hernandez is an interesting case for 2012.

Hernandez turned in a season that actually looked very much like his Cy Young season if you believe the ERA predictors (xFIP was 3.14 in 2010 and 3.15 in 2011) but there have been some legitimate concerns raised in some reputable nerdy destinations around these series of tubes that Al Gore likes to call the internet.

His fastball velocity is down, and it has been coming down just about every season since 2007:

With this drop in velocity has gone his Swinging Strikeout rates and yet his strikeouts have increased, leading some to cry foul -- suggesting there's an imminent correction coming for the King:

This actually makes good sense, really. And who knows, maybe these prognosticators are right. But there's something I've said before (actually said it about Clayton Kershaw going into 2011 - pat, pat) -- there are pitchers who have to pitch smart and pitchers who simply have great stuff and then there's guys who have stuff that pitch smart. And the latter is dangerous. And I think Hernandez is in that class. "Well duh," you might say - the dude won a Cy Young - but my point is more about explaining away the velocity changes and the decrease in swinging strike rates while the K rate remains fairly constant.

The fact is, Hernandez has tweaked his repertoire. He's not merely trying to blow hitters away with a Fastball/Slider combination as he did back in 2007 -- he's mixing his pitches far more than he ever did in the past, and he's made strides in getting into better counts. 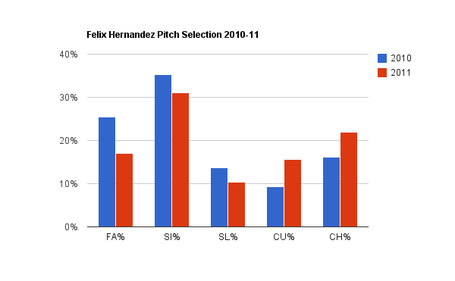 Hernandez had one of the better change-ups in baseball in 2010, rating at about 2.6 runs above average (per 100 pitches), ranked as the fourth best change for a starter in baseball. His change-up in 2010 produced a whopping 21.2% whiff rate, far and away the highest rate in his repertoire of pitches. Perhaps recognizing that, he went to the change-up well far more frequently in 2011, and the results were great. His change rated at three runs above average (per 100 pitches), good for second most valuable in baseball. And for you injury-avoidance-mavens out there, you'll be pleased to see the great elbow destroying pitch and that which keeps Dr. James Andrews a very rich man at an all time low.

You'll also notice that he's throwing a classic fastball fewer than 20% of the time, relying more on his sinker and his change-up. So grousing about his dip in fastball velocity probably doesn't make a ton of sense relative to his fantasy value. Lastly, Hernandez is throwing more first pitch strikes than he has in the last four seasons (62.9%) and he's generating more swings on pitches thrown outside the strike zone (32.3%) than at any point in his major league career.

Hernandez turns 26 in April. I'm not buying that his trends suggest we're going to see his strikeouts start to fade and that somehow he becomes more hittable. To the contrary, I think he's starting to pitch to his strengths more and he's not taking a "here's my best pitch, try to hit it" approach that may have worked nicely when he was 22. For those of you in traditional 5x5 leagues, I'd bank on a repeat performance in strikeouts (220-ish) and my money is on a drop in his ERA down into the 3.00 range, or perhaps even a tick below. We didn't get into this at all, but if his batted ball percentage regresses back into the range where it was from 2009-2010, he should also see a precipitous drop in his WHIP back down in the 1.10 range. No, wins won't be easy to come by in Seattle - but hey, wins are fickle to begin with.

As for my one liner headed to my spreadsheet on Felix: "Ignore concerns about velocity and SwStr%, could actually outperform early draft slot - believe it."