Our team-by-team preview of the 2012 MLB season from a fantasy perspective continues today with the New York Mets. Make sure you check out Kenneth Arthur's spotlight on various Mets players. Our series will continue tomorrow with the Philadelphia Phillies.

2011 was the first year of what will likely be a lengthy rebuilding effort for the Mets as Sandy Alderson and Terry Collins took over as GM and manager, respectively. The team finished 77-85, good for fourth place in the NL East, and they were never really in the race. Headlines were dominated by owner Fred Wilpon's involvement with Bernie Madoff, leading to speculation that he would sell at least a stake of the team. After an agreement to sell a minority stake to David Einhorn fell through, Wilpon secured a $40 million loan from Bank of America. Major League Baseball is reportedly ready to assume control if the situation doesn't improve.

Against that backdrop, the 2012 Mets will suit up to play baseball without 2011 batting champion Jose Reyes, who was lost to free agency, and without Carlos Beltran and Francisco Rodriguez, both of whom were traded last year at the deadline. The trade acquisition of outfielder Andres Torres and the free agent signing of closer Frank Francisco were really the only noteworthy transactions for the big league club this winter. It's a very dire time indeed for Mets fans. With Washington expected to make a step forward and Miami making several high-profile investments, New York may be looking at a basement finish for the first time since 2003.

Citi Field has played as an extreme pitcher's park since it opened in 2009. This offseason, the Mets are moving the fences in as much as 12 feet, as well as lowering the walls from 16 feet in some places to 8 feet all the way around the outfield - not an insignificant move. Obviously, this should boost the value of hitters and hurt the value of hitters, but don't get too crazy: many observers expect the park to still favor pitchers slightly. Here's a diagram of the changes: 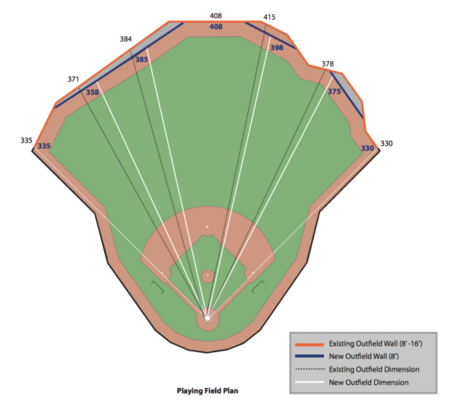 Many are projecting a bounceback year for David Wright as a result of these changes, but I'm hesitant. It seems a little too easy to simply assume that he'll be the same player he used to be four years ago. He's currently being taken third among third basemen in mock drafts, which is a little too close to his 2008 value for comfort. Buy an improvement, but don't overpay.

The Mets will have a new bench coach this season in the form of Bob Geren, who was something of a train wreck as a manager in Oakland, often clashing with his players. This should be fun. As for Terry Collins, he's something of a traditionalist, as you'll see in the quotebox down below. Don't expect any wacky and crazy lineups or on-field strategies when the team is struggling in June. That's actually a good thing - you can count on your Mets players getting their at-bats and their starts. Also, there's this. Actually, this is going to be a lot of fun.

There aren't really any positions up for grabs, except for perhaps in the bullpen. Unfortunately for Mets fans, it's not because the team is filled with first-division players - it's because there's nobody else in the organization who can make a legitimate claim to a starting spot at this point in the game. Utility man Daniel Murphy doesn't really have a home, so he's been learning second base and will face some competition from Justin Turner, but at this point it almost looks like a mere formality.

Not much guesswork involved here. From mets.com:

The alternative to Torres is Murphy, less of a classic leadoff man but the better sabermetric choice given his .362 on-base percentage last season. Then again, Murphy posted a .313 on-base percentage in his only full big league season back in 2009, and he possesses a fraction of Torres' speed.

More importantly, Collins said at the Winter Meetings in December that while the idea of batting Murphy first intrigues him, in an ideal world, he would prefer to slot the infielder's gap power lower in the lineup. So expect Torres to bat first and Murphy second, with the slight potential for Murphy to bump up a spot.

Again, this was easy. Collins has verbally committed to these five. Presumably, Chris Schwinden, who had a cup of coffee in September, will get a shot if there's an injury (Santana) or if one of the guys at the back end doesn't pan out this year.

Frank Francisco was brought in to be the Mets' closer, and Jon Rauch made the trip from Toronto with him to set-up. At 32, Francisco still has a lively fastball and can rack up the strikeouts, though home runs are a bit of a problem. Rauch and Ramon Ramirez, the other guy in the Andres Torres trade, will compete for 8th inning duties. Ramirez has the better stats across the board and could be a value pick in leagues that count holds. 27 year-old fireballer Bobby Parnell, who was viewed as the closer-in-waiting before Alderson acquired Francisco, is still an intriguing option if you're chasing strikeouts but don't mind taking a hit to the rate stats.

My definition of sleeper and yours may vary. I use the term to refer to a player who may be undervalued, no matter his current or expected draft position.

Lucas Duda is a fantasy sleeper darling, and why not? He hit .292 with 10 home runs and 50 RBI in 100 games last season, and he's expected to earn the right field job outright. His average seems relatively sustainable (.326 BABIP vs. .314 xBABIP), and his FB% (43.4) could be an asset with the walls moved in. A word of caution, though: His 2011 numbers could be inflated because he had the advantage of playing as part of a platoon. He can mash righties, but against lefties his numbers are below average, especially in the power department (.209 ISO vs. RHP, .113 vs. LHP). I like him as a late-round flyer, but guys who are constantly tagged with the sleeper label can tend to be overdrafted, especially in leagues that draft later in March. Tread lightly.

Minor league pitchers Matt Harvey and Jeurys Familia are not likely to earn major league jobs out of Spring Training, but they could find themselves up later in the year if their development continues and the situation is right. Harvey is an intriguing prospect, and I'll be watching to see if he can find some level of comfort against left-handed hitters, which is a weakness of his. Familia is still treated as a starter, but some scouts think he would work better at the back of the bullpen, so it will be interesting to see how the organization treats him if they start to think he can contribute sooner rather than later.

Know of any other sites or Twitter accounts that deserve a mention? Let me know in the comments.