The spoils of the Josh Beckett trade continue to pay dividends as Anibal Sanchez had perhaps his finest season in 2011 despite earning just eight measly wins. And yet, he seemingly hasn't earned the respect of most fantasy baseball managers.

Sanchez, 28, saw his strikeout rate skyrocket to the highest point in his career at 9.26 K/9 and overall posted a 24.3% K rate. That K/9 rate is good for fourth in all of baseball -- higher than Cliff Lee, Tim Lincecum, and Justin Verlander among many other pitchers with impressive pedigree.

For those of you graphically inclined here's the respective directions of his WHIP and his SO/BB rate the last three seasons: 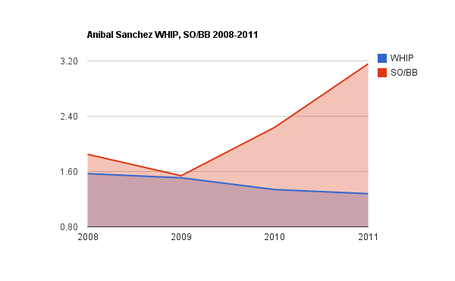 Additionally, his contact rates - both within the strike zone and overall when swinging the bat - were fantastic. With an 83.7% Z-contact (in the zone) and a 76.9% overall contact rate, he is in pretty elite company. His Z-contact rate was third in all of baseball, and bested both league's Cy Young winners and his overall contact rate was right there with guys like Clayton Kershaw, James Shields, and Roy Halladay. Sanchez was flat out tough to square up in 2011.

A few thoughts about Sanchez going forward that may affect how you tread him on draft day, however:

We might not expect him to have a strikeout rate up over 24% again in 2012. He has a 19.4% career rate and the last two seasons sat around 18.5%. If you're a Fangraphs+ subscriber, you can check out my piece on strikeouts that involves some predictive modeling, but in case you're not, Sanchez popped up as a 3% overperformer relative to K%, which would have him settle in somewhere around 21%, which I think is fair. That might put his K/9 rate around 8.4-8.5, which is still pretty fantastic, but not quite the 9.3 K/9 we saw last season.

Park factor is going to be a bit of a wildcard, but early analysis suggests that his new home field is going to have a reputation as a pitchers park. This could help Sanchez (among others) get his HR/FB rate down a little south of league average, which is where it sat in 2011.

Lastly, something that might be a concern is his repertoire. He has consistently used his slider over the years, but in 2011, he used it nearly 30% of the time -- and that's particularly good news if your name is James Andrews or Lewis Yocum but for any injury averse out there, it's a bit of a red flag.

Sanchez currently has an ADP in Yahoo at about 140. If he remains healthy, there's a strong likelihood that he will give your squad something in the range of a 3.70 ERA, 1.30 WHIP, and about 190 strikeouts (assuming 200 innings). Miami is going to have a pretty solid offense, so there's no reason to think that he won't produce in the win column as well. At 140, that's pretty nice value.

But if his elbow explodes, don't be too surprised.