Our team-by-team preview of the 2012 MLB season from a fantasy perspective continues today with the Houston Astros. Make sure you check out Kenneth Arthur's spotlight on various Astros players. Our series will continue tomorrow with the Milwaukee Brewers.

The Astros won 56 games in 2011, just 8 more than a team made up of theoretical replacement players. Ouch. They gave up more runs than any other National League team and came in second to last in the league in runs scored. They were the worst team in the league by a wide margin. Let's just move on.

Things are looking up for the future - Drayton McLane finally sold the team, and new owner Jim Crane has already brought in a new General Manager in Jeff Luhnow, who comes over from the Cardinals organization. A couple of trades at last year's deadline have breathed new life into what was a mostly dead farm system. However, even the most optimistic of Astros fans won't pretend that 2012 is going to be much better. There will be growing pains for the team this year, as young players are given the chance to play regularly and to learn how to fail. 2012 will also be Houston's last year in the National League, as they will move to the AL West in 2013.

Minute Maid Park has a reputation as a hitter's park because of the Crawford Boxes out in left field, which over the years have yielded some pretty cheap home runs. However, the deep center field, where no home run has been hit since May 4, 2010, actually ends up making MMP just about neutral for everyone but right-handed pull hitters.

If I may go on a non-fantasy rant, there's something about this park that really bothers me. I understand that ballparks have unique quirks; that's part of what makes the game great. In fact, I've always had a fascination with these variations, like the right angle cut into Griffith Stadium in center field, or the stone monument that was in play at the Polo Grounds. When MMP was built, the architects did a great job building little (and not so little) idiosyncracies into the design, like Tal's Hill and the flagpole that is technically in play were a ball to hit it on the fly. It's amazing to me, then, that they could also swing and miss so badly on one area of the design: the vertical yellow line, pictured here: 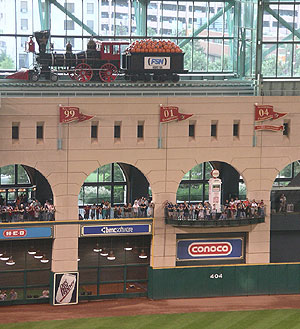 Not all walls in ballparks are the same height. I get that. But in every other ballpark in the world, a fence is a fence. One can't just arbitrarily draw lines on a wall and say, "To the left of this is in play, to the right is out." That's the sort of thing that kids do in backyards. This is a $250 million stadium. They couldn't simply build a wall and then leave some space behind it? It looks like an old Costco building that's been retrofitted to house a baseball field. (The train is cheesy, too.)

Brad Mills is a player's manager with a reputation for his upbeat positivity even in the face of abject failure, a good trait for a manager of a last-place team to have. He's also extremely loyal to his veterans, which can be frustrating for fans that want to see the younger players on a bad team get some opportunities to take some steps forward.

Almost every position on the diamond is up for grabs in 2012. It's almost easier to name which spots aren't wide open: first base, second base, shortstop, left field, and a couple of the starting spots.

Catcher will likely be manned by Chris Snyder until Jason Castro can return from an ACL & meniscus tear, so maybe for forever. His competition will be Humberto Quintero, a classic defense-only catcher that doesn't belong on your fantasy radar. Meanwhile, Jimmy Paredes and Chris Johnson will battle over the right to man the hot corner. Paredes is the probable winner and is more likely to provide limited fantasy value.

Outfield is where it gets a little interesting. Jordan Schafer is currently considered the favorite to play center field, but fantasy players would certainly appreciate it if Mills gave the job to Jason Bourgeois, who can contribute in the batting average and stolen base departments. Schafer has some speed too, but a .309 OBP isn't going to yield many steal opportunities. Bourgeois could conceivably slide over to right field if Mills felt the need to make sure he gets at bats, but he doesn't really fit the profile of a corner outfielder. Besides, new guys Jack Cust and Fernando Martinez, as well as Brian Bogusevic, who was strictly a platoon guy in 2011, will be competing for that job anyway. In a perfect fantasy world, where everybody uses OBP instead of AVG, Jack Cust would win that job and play alongside Bourgeois, but people who know more about the Astros than I do think it will probably be Schafer and Bogusevic.

Then, of course, there's the rotation. Wandy Rodriguez, Brett Myers, and Bud Norris are all locks, but the last two spots are up for grabs. Serious candidates include J.A. Happ and non-roster invitees Livan Hernandez and Zach Duke. Hernandez could prove himself worth of a spot start or two when the conditions are right, especially in NL-only leagues, but the other two? Do not want.

It's hard to project an order when you don't know who's going to be playing where, but at the very least the top half seems a safe bet, based on Mills' 2011 lineups.

With the exception of 26 year-old Norris, this is a pretty old rotation, and none of the candidates to make spot starts in the case of injury are great options. Kyle Weiland, the "other guy" in the Lowrie-Melancon trade, has some passable AAA numbers, so I'll be keeping an eye on him if and when he gets his shot.

Mark Melancon is gone, so there's nobody wearing the title of closer for the Astros right now. If Brandon Lyon is healthy (I'll wait for you to stop laughing), he's the guy, but failing that, Juan Abreu seems to have the inside track right this second. Abreu has a fastball that touches 100 and some gaudy strikeout numbers, but he's still very raw. I like him as a guy who can provide some solid value if he wins the job. It's a long spring, though, and there are plenty of other guys who could step up and grab the mantle, namely Wilton Lopez, Fernando Rodriguez, and David Carpenter. Rodriguez and Carpenter have the better strikeout numbers, but they allow way too many baserunners to be effective at the back of the bullpen.

My definition of sleeper and yours may vary. I use the term to refer to a player who may be undervalued, no matter his current or expected draft position.

Bud Norris was a hot midseason pickup last year, but a lackluster end to the season has apparently made people forget what he can bring to the table. His swinging strike percentage was 13th in all of baseball last year, meaning he should be able to sustain and maybe even improve on his high strikeout rate. The Astros are bad and Norris is not going to win a lot of games, but he will provide value in every other category. Right now he's the 84th starting pitcher off the board, behind guys like Roy Oswalt (who still doesn't have a job), Johan Santana, and Carlos Zambrano. Norris is another guy that proves you can grab strikeouts late in the draft.

Can infielders Matt Downs and Brett Wallace weasel their way into one of the many position battles that will be happening in Kissimmee this year? Wallace is a former top prospect at first and will reportedly be given a chance to stick at third, while Downs has enough pop and on-base skills that he really ought to be considered Carlos Lee's successor at first base. Will Mills be able to find a way to give either of these guys playing time, or will they end up in AAA? Worse, will they rot on the bench?

Know of any other sites or Twitter accounts that deserve a mention? Let me know in the comments.