Will Middlebrooks and the Off-Speed Stuff

Boston Red Sox third baseman Will Middlebrooks was unfazed by big league pitching his rookie year. Can he continue his hot hitting in 2013?

Share All sharing options for: Will Middlebrooks and the Off-Speed Stuff

If you adjust Will Middlebrooks' 2012 season to 162 games, the Red Sox third baseman would have hit a staggering 32 home runs with 117 RBI his rookie year. That would easily put him in the second tier of third basemen behind Miguel Cabrera, and maybe, just maybe, Mike Trout's unanimous AL Rookie of the Year award wouldn't have been so unanimous.

But projecting a player that's logged less than 300 at bats in a season (or a career, for that matter) is a dangerous game. I could do the same with Jarrod Dyson and project a league leading 55 stolen bases, or I could make Yasmani Grandal the second best catcher in baseball behind Buster Posey. It's a fun exercise to do, but, needless to say, it's not an exact science.

That's why when I searched the web for some early Middlebrooks' projections for the upcoming season, I was surprised by what I found:

Both projections leave little room for regression, and they're more or less a continuation of his 2012 season, in which he hit .288/.325/.509 in 286 plate appearances with 15 home runs, 34 runs, 54 RBI and three steals. (It's also important to note here that Middlebrooks' season ended prematurely with a broken right wrist.)

A projection that's less optimistic comes from Dan Szymborski and ZiPS (ESPN insider), which projects a .255/.292/.434 line, indicating a significant loss of power is coming. Fake Teams' Ray Guilfoyle, meanwhile, projects a .270 average with 20 home runs, 70 runs and 80 RBI. That, to me, seems like a lot more reasonable projection than the first two listed above.

The concern with Middlebrooks is his inability to recognize off-speed pitches, and that's exactly what prompted Keith Law to remove Middlebrooks from his list of top 100 MLB prospects prior to the 2012 season, after the third baseman hit .161/.200/.268 during his 2011 promotion to Triple A:

He's an above-average defender at third with good reads and a plus arm; he could get to the big leagues on his defense alone. The issue for Middlebrooks will be whether he can hit enough to be able to hit for power, and he's not going to hit unless he can recognize off-speed stuff better and at least threaten to take the occasional walk, getting into more fastball counts to get pitches he can drive.

Middlebrooks started 2012 back in Triple A; only this time, he destroyed opposing pitching, hitting .333/.380/.677 with nine home runs in 100 plate appearances. When Kevin Youkilis hit the DL in early May, Middlebrooks got the call and the rest is history.

The bad news is Middlebrooks didn't show great any discipline in 2012, as his 24.5 percent strikeout rate was well above league average, and his 4.5 percent walk rate was well below it. The good news is it didn't seem to matter, as Middlebrooks boasted a HR/FB rate of 21.4 percent, which, if it qualified, would have tied Chase Headley for the 10th highest mark in baseball.

So what gives? Is the 24-year old capable of putting up big numbers again with high strikeouts, low walks and below average contact rates?

From the Baseball Prospectus PitchFX Hitter Profile tool, you can see Middlebrooks' home run total breaks down like this:

What's interesting is Middlebrooks was thrown fastballs 52.7 percent of the time in 2012 (the league average was 57.6), which was the sixth lowest percentage among 45 third basemen with 250-plus plate appearances. So the book on Middlebrooks was out, he just did a good job of cashing in on fastball pitches.

Using Middlebrooks' Run Value Heat Map against off-speed pitches (slider, changeup, curveball, knuckle-curve, knuckleball), you can see he struggled to produce much of anything against pitches anywhere on the outer half of the plate, with all his production coming from inside pitches (His values are compared to the league average.): 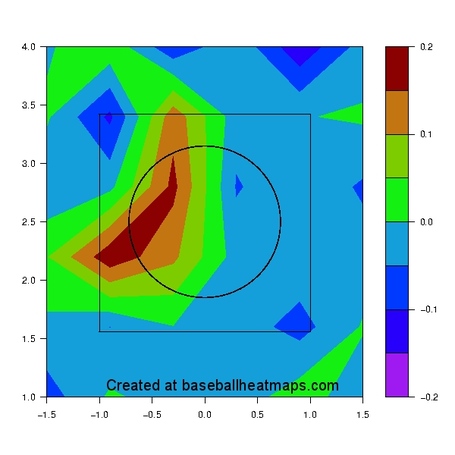 Opposing pitchers will certainly continue to attack this weakness, and, if he hits behind Boston's power bats in the lineup (where he's expected to), pitchers won't be eager to throw him a heavy dose of hard stuff.

In 2012, Middlebrooks succeeded on the heels of a fast start, with ten of his 15 home runs (and 21 of his 29 extra-base hits) coming in May and June. He labored through July with a 28.6 percent strikeout rate and a 2.9 percent walk rate, and then made ten starts in August before being shut down with a broken wrist.

Over the Monster's Ben Buchanan recently reviewed Middlebrooks' debut, and offered these concerns, which I share, heading into next season:

It's been four months now, almost to the day, since we last saw Will Middlebrooks stand in at the plate and take his hacks. And, because of the nature of his injury and sophomore slumps, there is reason to be concerned heading into 2013. Will the power still be there, or will the wrist hold him back? Will pitchers find new ways to exploit him? Has he forgotten the lessons of 2012, or will he just keep growing?

I'll reiterate the sentiments of Law here: Unless Middlebrooks can learn to take a walk here and there, I do not expect his power from 2012 to carry over to 2013, as pitchers will undoubtedly throw even less hard stuff than they did his rookie year. If that happens and Middlebrooks doesn't adjust, it's entirely possible he suffers a devastatingly slow start to the season and doesn't recover. With that said, I see him taking a significant step back and hitting .265/.300/.445 with 18 home runs and 68 RBI in 2013.

The star potential is still there, it just might take a year or two before it shines.