The Anatomy of a Championship Team, Part One (The Draft)

Bret Sayre kicks off a three-part series of the choices which led to a repeat championship is his most important home league.

Share All sharing options for: The Anatomy of a Championship Team, Part One (The Draft)

If there's one thing you should know about me, it's that I play in way too many leagues. Right now, the count is up to 12, I believe. I know, it keeps growing. But my most important is a nearly 30-year old 4x4 redraft league that I've personally been in for nearly a decade. It's a 16-team league, but plays like a single-league format, since there are 7 MLB teams that get excluded from the player pool (they get voted on before the season begins). There is also no bench, so your 23-man active roster is your 23-man roster - there's no stashing or streaming. If you draft him, you play him or you drop him (unless he gets hurt or sent to the minors). It's also a slight derivation of a standard 4x4 format, as on the pitching side, we include K's and exclude WHIP (on offense, runs are excluded).

I came into the draft this past March as the defending champion - finally bringing home my first title since entering the league. The competition is fierce as the league is filled with owners who have been playing forever and are extremely knowledgeable. And as you can tell by the title of the post, I defended my championship this season (in very dramatic fashion). But in the next three posts, I'm going to take a look at what I did in this league and see where my successes and failures were. It seems like an appropriate time to do it, as next week we will be starting our march towards 2013 here at Fake Teams. And, as everyone knows, to move forward, you need to first look back.

So, below is the team that I drafted on the last day or March. I have included both the "price" I paid for them and the "value" they accumulated over the course of the season (using Mike Gianella's fantastic #roto valuations at Roto Think Tank). I know it's not a perfect match since it doesn't play quite as deep as an AL/NL only league and it's not 5x5, but he does great work with this and I don't have time to do my own. Here it is: 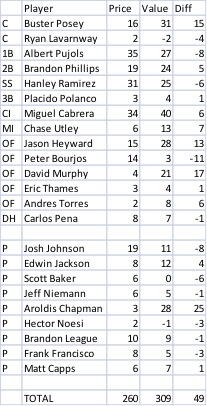 My strategy should be pretty obvious by looking at the team: grab some big bats early and wait for value later on. I was very surprised that Pujols and Cabrera went as cheaply as they did, but they were also two of the first three players thrown out at the beginning of the draft. Don't let anyone tell you otherwise, the first handful of players who get thrown out in an auction very often end up being some of the best buys of the day. Now I'm going to get into the biggest bargains and busts of my draft day.

If someone tells you they thought Chapman would not only grab the Reds closer job, but put together a nearly historic season doing so, they're full of it. I grabbed Chapman because he still had a chance to make the rotation at that point, and his downside was a reliever who was likely to be worth his $3 salary even if he never accumulated a single save. Not only was his value integral to my team, but his emergence caused my other closers to be expendable (which I'll get to in the third part of this series).

I owned Murphy last year when he had a sneakily valuable season in deep leagues. I had my eye on him again this year for the same reason. I figured he'd rack up 350-400 AB and sniff double-digit homers and steals, but what he delivered was much better.

I only ended up with Posey because I lost a bidding war for Joe Mauer. Sometimes the auction just breaks right for you, and this is one of those situations. The last few seasons I've stayed away from big-name catchers, spending less than $6 total on the position in both 2010 and 2011 - but adjusting on the fly at the auction helped me out a great deal.

I wanted Heyward and I got him - I probably would have gone up to nearly $20 as well. I was certainly not the only one predicting a big comeback from him, but I was one of the voices in the choir.

I thought I'd be getting nearly 30 steals out of the speedy Angels OF, but it turns out I only got a tenth of that. Bourjos (and the next player on the list) was a big reason I dug myself into a nice hole early in the season. In fact, I was in 15th place at the end of April - a whopping 50 points behind the first place team.

The one positive thing I can say about owning Pujols was that I never considered dealing him for 75 cents on the dollar. In fact, I even wrote here on May 1st that Pujols would be fine and I was banking on a hitter of his caliber making the necessary adjustments to turn around his season. He certainly did that, but it was not enough to recover his big early losses.

This one I wanted back almost as soon as the draft was over. With the strategy I employ, it's important that I hit on the one decent pitcher I buy. I had been all over JJ as a guy to target in the pre-season since all reports were that his shoulder was going to be as healthy as it had been in years, but I should have known this was too high risk. Strangely enough, if you had told me at my most regretful moment that JJ would have pitched 191 1/3 innings, I'd have been thrilled to hear that.

* The Scott Baker and Chase Utley picks were both risks I thought were worth taking at those prices. It turns out, when you averaged them together, I broke just about even - which is great considering Baker never even threw a pitch.

* Jeff Niemann and Hector Noesi were players I grabbed in a lot of drafts this March, and both were disappointments for different reasons. Noesi stayed healthy, but was beyond terrible. Niemann was on his way to a great season, but just could not stay on the mound. Even 50 innings from him, the way he was going, would have been enough to break even there - but it was not meant to be.

* Miguel Cabrera is a stud. That is all.

I left this draft thinking that I had plenty of offense, and enough pitching to be at least middle of the pack if things broke right. It turns out I was mostly right about the first part, but my starting pitching was a weakness from the get go. By the end of the second week of the season, Baker was done for the year and Chapman was relegated to a set up role. Fortunately, I was able to piece together a staff through a series of FA pickups (Part Two) and trades (Part Three) - and I will get to how that happened tomorrow.