Bret Sayre takes a closer look at Detroit's other strikeout machine to see whether he can be a #1 in 2013.

Share All sharing options for: Is Max Scherzer Now a Fantasy Ace?

If you owned Max Scherzer in 2012 in a relatively shallow league, you likely drafted him to be your #3 or #4 starter. In the pre-season, he was going outside of the top-40 starting pitchers, behind guys like Chris Carpenter, Tim Hudson and Shaun Marcum. He was coming off a 2011 season in which he had a 4.43 ERA and 174 K's - which was a sizeable disappointment based on where he was drafted that year. For those of you who don't remember, Scherzer was a fantasy analyst darling in the 2011 pre-season, as he successfully hid a fantastic last four months in his overall 2010 numbers. Scherzer was sent to the minors after getting smacked around by the Red Sox on May 14, 2010, and upon his return, he quietly became a stud.

So why is looking at a breakout of his 2010 line important in valuing Scherzer going forward? Because he did a very similar thing in 2012. On May 15, 2012, Scherzer got smacked around by a different group of Sox (White); however, instead of getting a demotion to the minors, Scherzer drew the Pirates in his next start and struck out 15 batters. Here's how that split looked this past season:

In both of these seasons, if you stuck with Scherzer through his rough patch at the beginning of the season, you were rewarded with some great performance. If you didn't, you're probably still kicking yourself about it. But the important question to ask is what did these two seasons have in common, and can we make the case that Scherzer is more likely to struggle in April/May of 2013 than other pitchers of his skill set? 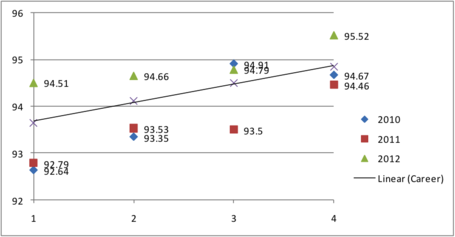 That line is his 3-year average fastball velocity per month (ignore the fact that it says career), and it increases from 93.65 MPH in April to 94.12 MPH in May to 94.50 MPH in June to 94.84 MPH in July. That seems like a big jump, so to put this to the test, I compared Scherzer's month-by-month velocity to four comparably hard throwers who stayed healthy during 2012: Henderson Alvarez, Jordan Zimmermann, Matt Moore and teammate Justin Verlander. Here's what I found:

On average, these pitchers saw their fastball velocity increase by 0.6 MPH between April and July. For the past three years, Scherzer has had April-to-July increases of 2.0, 1.7 and 1.0 - averaging out to 1.6 MPH per season, a full MPH more than the focus group. You would then think the next step is for this to materialize in his performance over Scherzer's career, and it does. His month-by-month career ERA: 4.55 in April, 5.03 in May, 3.70 in June, 3.17 in July. His month-by-month career WHIP: 1.50 in April, 1.44 in May, 1.29 in June, 1.21 in July. And for those of you who scoff at ERA/WHIP as a marker of anything, his month-by-month FIP: 4.36 in April, 4.16 in May, 3.54 in June, 3.59 in July. It makes sense; as his velocity increases, his level of performance increases. What this tells me is that Scherzer is likely to have his worst performances in at the start of the season going forward, and that we shouldn't be scared off by any April/May numbers he puts up in future seasons.

Now that we've gone through some of the details about why he's performed the way he has, it's time to answer the question I laid out at the onset of the post. Is Scherzer a fantasy ace? My answer is no and here's why. First of all, even if you assume that this level of performance and velocity is what you'll get going forward, Scherzer was still only the 25th best fantasy SP on the ESPN Player Rater in 2012. On top of that, if you give him some credit for being excessively unlucky in April (.442 BABIPs don't exactly grow on trees), that still likely only pushes him into the back-end of the top-20. This is partially because strikeouts were up so much across the entire league last season, but mostly because he doesn't throw the innings required of an ace. Despite being healthy enough to make 96 starts over the last three years, Scherzer has still never pitched 200 innings in a season. This is a big deal because it leads to fewer wins - and while a lot of what goes into pitcher wins is luck, the biggest thing a pitcher can control is his ability to go deep into games. It also means his ratios are less meaningful. Finally, with the Tigers' defense likely to remain similarly bad heading into next season, his margin for error will be a lot smaller than most. Even Mad Max can't strike out everyone.

So while the answer is no to whether Scherzer is a fantasy ace, he's still an extremely valuable pitcher. When I do my 2013 pitcher rankings, he will certainly be in the top-20 and possibly even sneak in the top-15. I believe his strikeouts and velocity are for real, and what we saw in 2012 is his true level of performance in the near-term. If Scherzer is your #2 SP in 2013, you're in very good shape.