How long has it been? 5 days you say, 5 days since the latest draft update from FakeTeams Hoops Tournament? Well that just won't do. Not at all. I know how much you've all been clamoring for this, refreshing FakeTeams every couple minutes just on the slight chance that there's a new update. And because I'm still in the Christmas-giving mood, I present the latest and greatest installment of our team-by-team fantasy basketball experts league draft results.

Today, Adam Madison, formerly of ESPN and the Talented Mr. Roto, will discuss what he liked and disliked about his drafted squad. Adam wasn't personally able to attend the draft due to a snafu with the Internet, but he was happy to discuss what the auto-picking computer did in his place.

"I have D-Will ranked 8th in turnover leagues, so no complaints."

"I usually hate drafting SG/SFs early, but I'm okay with this pick; 'Melo's my 13th ranked player. He shot 42.4 percent on 3-point attempts after joining Mike D'Antoni in New York, and while his career percentage of 32.0 percent implies that's a fluke, he was chucking 4.6 triples per game. Fluke or not, that's a boon to his fantasy value even if his field goal percentage correspondingly drops a couple of points. He's always been one of the few stars with a low turnover rate relative to his usage, so I captured some value here."

"Now we're talking! I've ranked Nash 25th on my Big Board, right ahead of Rajon Rondo and Rudy Gay and below Chris Bosh and Brook Lopez. Nash is a symptom of a major market inefficiency going on this year: veterans. Peers such as Jason Kidd, Tim Duncan, Kevin Garnett, Ray Allen and Carlos Boozer are also extremely underrated. Nash keeps himself in impeccable shape, so I'm not worried as much as I otherwise would be about attrition. Why would Kyle Lowry be picked ahead of Nash when the latter finished 18th on the player rater and Lowry couldn't even crack the Top 50? Turnovers, you claim? That's why I knocked him seven spots on my rankings."

"This is where I get screwed by the autodraft. Bynum is a terrible pick, because even in a best-case scenario – 60 games played at 34 minutes per game – he isn't going to provide a great Return On Investment (ROI). I have Bynum ranked 63; I would have selected Nene, whom I have ranked 29th."

"This is almost exactly where I've ranked Blatche, but the highest players on my board who were still available? Lamar Odom (38th) and Carlos Boozer (44th)."

"Another bone-crunchingly silly pick by the autodraft. Jackson is terrible and I would like to trade him. Unfortunately there's little chance of that happening: considering his ADP is around 55, the fact that he fell this low means no one likes him, and he's my only shooting guard. What the heck? Jackson is getting old fast, and is a major injury risk considering how many minutes he's logged over the years. He's also a turnover machine."

"All you can ask is that the autodraft doesn't screw you up. Since turnovers count, Calderon could return me 20 spots of value on this selection. My number one priority in drafts is leaving with a group of elite point guards, and with D-Will, Nash and Calderon I've accomplished that."

"This is where I'd really like to have been here, because you miss out on extraordinary upside. Kaman's ROI won't be so hot. I could get lucky, but Kaman is exceptionally risky: the Hornets play slow-as-molasses, he's a major injury risk and he's not even guaranteed major playing time. Yikes! I would've grabbed Tony Allen, who went 118th overall but has Top 50 (you heard me) potential."

"I don't even want to write this. Brandon Knight at 122? Massive steal. Sigh.

"Miller is a candidate to be dropped. Yet he could come in handy: he has experience with George Karl and is an up-tempo guard while Ty Lawson is mot decidedly not. He could also be traded, since he is a starting-caliber point. Miller solidifies my position of strength."

"This isn't as terrible as it could've been, since a lot of would-be sleepers are already gone. Carl Landry would've been my slam-dunk pick."

"Set to be dropped. I won't say who, because I'm going to be one sad panda if I don't get my sleepers. They're so deep they should be called R.E.M. I am prepared to look like a genius. First place, baby!"

For you see, this was back when I assumed the format would be a round-by-round inclusion of every owner's opinion of their respective pick. And so I asked Mr. Madison to write a separate ditty for all three of his final players (why I decided to be a stickler on writing about three to-be-dropped players who he didn't draft anyway was beyond me, but in my defense, I was under a lot of stress. Yeah, yeah that's it...). For your reading consumption, here's the extra part he was gracious enough to write.

"I dropped this trio for (in order) James Johnson, Jermaine O'Neal and Glen 'Big Baby' Davis.

"James Johnson is the sexiest sleeper of the year as far as I'm concerned, the type of player every shrewd owner should love: a fantasy-friendly game (averages of 4.7 rebounds, 3.0 assists, 1.0 steals and 1.1 blocks in 28 minutes per game as a starter in Toronto) with youth to spare (24). He's extremely athletic, too, with a strong build and a 7'1 wingspan. There's also reason to bank on his improvement, aside from his age: as an accomplished fighter we know he's a disciplined hard-worker. As the clear starter on a Raptors – the only competition for playing time is Linas Kleiza, who was a flop as a free agent pick-up last year – he could be this year's Dorell Wright.

"The other two are more like place-holders. O'Neal is the only center on the roster, garnering him as many minutes as he can handle. He's just 33; is it out of the question that he can stay upright for, say, 50 games, average around 30 minutes and swat two shots per game? Reports from camp have been glowing.

"Glen Davis is one of my least favorite players. Somehow he's earned a reputation as an above-average player, but that's a farce: any power forward that needs 10.3 shots to score 11.7 points and can't average even six rebounds per game in 30 minutes a game is a career back-up. Because he's content to shoot jumpers all day his field goal percentage (45 percent for his career) shall remain middling. But the Magic are a poorly-run organization, one silly enough to make noise about starting Davis.

"I'll probably drop him soon. My eyes are on Bismack Biyombo (this scouting report plus the Bobcats' desperate need for a big), Matt Barnes (long been one of the most valuable glue-guys in reality, and showed he can put up numbers as a starter during his Suns days), Alec Burks (C.J. Miles is a proven mediocrity, and although Burks can't shoot, he can rebound and get into the lane, which often translate instantly), Robin Lopez (Marcin Gortat just broke his thumb) and Damion James (if the Nets don't sign AK-47 he's looking like the starter)." 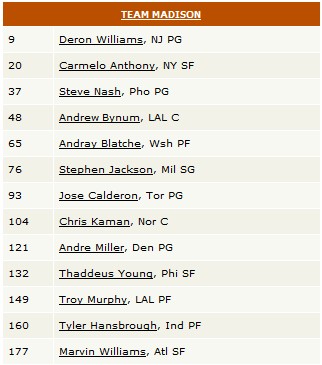 He did indeed drop Murphy, Hansbrough and Williams, replacing them with James Johnson, Marcus Camby and Steve Blake. The only other alteration to his roster was a deal he made with yours truly, sending Stephen Jackson and his ever-decreasing field-goal percentage to me for Landry Fields, who could give him more tertiary statistics without the large turnover rate and poor shooting that Jack brings to the table.