Do you get drowsy looking at your fantasy basketball team? Are you depressed after losing too many matchups? Don't be ashamed. There are millions of Americans, just like you, who no longer have the energy to get out of their chair and check on their team. It's natural. When you were younger, and you first discovered fantasy, you could check on your team for five, ten, or (if you were really excited) even fifteen minutes at a time. But now the sport has grown on you and you're not winning as much. If you check your team at all now, it's only for like 90 seconds; five minutes tops. Luckily, there's something I can recommend that'll make you love your fantasy team like you were 19 again, and give you all the energy you need to satisfy not only your own fantasy basketball desires, but the computer's as well. After all, it isn't fair to just go to sleep every night, leaving the computer alone with your five dynasty leagues that are all in their infancy. No successful fantasy partnership can be built without both parties working in harmony, taking turns with decision-making, deciding which league needs the most attention, which players need to be put in timeout.

Have I beaten the analogy to death yet? Well too bad!, because the thing I'm recommending is actually a person: Jason Hahn of fbasketballblog.com, who also writes for Dime Magazine as the Fantasy Doctor. Unlike most dimwits in the fantasy bracket (yo), this guy is actually getting paid for his surgical analysis of fantasy teams, so his opinion carries much more weight than your average fantasy-medical-expert-wannabe. Also, he's a good writer and has something new up every day, so go visit his blog, won't you?

Unfortunately, Jason wasn't actually able to attend the draft way back on Dec. 18 -- probably due to emergency triple-bypass surgery on a team that accidentally drafted Larry Hughes in the first round. It didn't matter though, because the computer made some unbelievable picks in his place. Sure, getting the No. 2 overall selection helped, but the auto-picker was brilliant, and Jason was appreciative.

To see what Mr. Hahn wrote about his 13 drafted players, click on the jump......

"Even the auto-picker couldn’t mess this one up. With Durant off the board, I wouldn’t have taken anyone but LBJ at No. 2."

"With LeBron as my team’s foundation, I would’ve been fine with just about anyone in the second round. Rondo is helpful in a head-to-head league, with his strengths obviously being his assists and steals, not to mention his solid rebounding for a point guard. His weakness is obviously his free-throw shooting, which doesn’t bother me too much since LeBron isn’t exactly a wiz at the charity stripe, either. So far, so good."

"I’m mostly happy with this pick, since I expect Lee to have a bounce-back, tooth-in-the-elbow-free season. He’s a solid all-around asset and really bolsters my team’s rebounds and solidifies its field-goal percentage. Lee is also a good source of assists (3.2 per game last season) from the PF/C positions, so my team’s looking healthy there, too. I see that my auto-picker left Gerald Wallace and Serge Ibaka on the board, two guys I would’ve loved to have gotten here to get an early foothold in the steals/blocks categories."

"I’m elated to get Monroe this late in the draft, since I’m expecting him to deliver top 40 value this season. I don’t really see anyone else I would’ve rather have auto-picked here, so this is dandy. The only downside is that I now have two prominent big men who don’t block many shots. At this point, I’m assuming I’ll have to forgo the blocks category and be satisfied with being pretty competitive in the steals column. Also, I’m seeing that I’m probably not going to win in the free-throw-percentage category too often."

"Did I say I’d have to relinquish blocks? While Gasol won’t singlehandedly save that category for me, he certainly helps. Like Lee, Gasol also dishes out a healthy number of assists (2.5 per game last season) for a big man. With Little Gasol on board, my team seems set to be competitive in field-goal percentage, rebounds, assists and steals."

"I’m actually pretty excited about having Billups fall to me here. While I’m bummed about missing out on Marcus Thornton a pick before this, I like Billups’ potential to be a beast from three this season. I also expect playing alongside Chris Paul and having a guy like Blake Griffin drawing lots of attention from defenses will boost Billups’ field-goal shooting closer to 45 percent than his typical 40 percent. I love the value here, but I’m kind of bummed that Billups’ strengths (free-throw shooting, threes) are in the areas that my teams probably won’t win too often."

"I’m actually pretty excited about having Billups fall to me here. While I’m bummed about missing out on Marcus Thornton a pick before this, I like Billups’ potential to be a beast from three this season. I also expect playing alongside Chris Paul and having a guy like Blake Griffin drawing lots of attention from defenses will boost Billups’ field-goal shooting closer to 45 percent than his typical 40 percent. I love the value here, but I’m kind of bummed that Billups’ strengths (free-throw shooting, threes) are in the areas that my teams probably won’t win too often."

"Maybe I can actually compete in threes now. Though my auto-picker started heavy with some frontcourt guys, it’s apparently decided to stock up on three-point shooters now, which I’m fine with. I’m scared of how playing with Stephen Jackson will affect Delfino, but I’m confident that he’ll remain a stud from three-point territory. In Billups, Dudley and Delfino, I have three players who can feasibly average around a pair of threes per game."

"Budinger is one of my favorite sleepers this season, which makes me smile at this pick. He’s another helper in the threes column and offers all-around help elsewhere, though I’d like to see him improve on his shooting from the field (43.2 percent through two seasons). I can’t see many reasons why Budinger won’t have an easy time locking down 30+ minutes a night this season."

"Meeks is going to start at shooting guard for the Sixers, which means he’s set to average about two three-pointers per night again. I really like my chances at winning the three-pointers-made column in most matchups this season. It wouldn’t surprise me if Meeks finished the season with top 75 value."

"I’m cool with this auto-pick. Williams will be a source of points, threes and a few assists off my bench, but I’m hoping I won’t have to rely on him too much."

"Well, if Brown does cut into Dudley’s playing time, at least I’ll have both of them on my side. I guess that’s a good thing."

"Another one of my favorite sleepers this season, I’m happy to have Jerebko auto-picked in the last round. I won’t expect much from him early on, since he’ll have to work off lots of rust and fight for minutes with Charlie Villanueva. However, with Villanueva suspended for the first five games of the season, I’m excited to see how Jerebko will respond. Maybe he can get produce some impressive lines and get a leg up on that starting gig for the Pistons. I wish the auto-picker drafted another center-eligible player here for my team, but it could’ve turned out much worse." 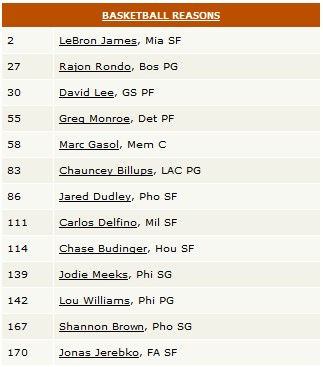 So yeah, to reiterate, this is one of the most glorious examples of auto-picking in the history of fantasy basketball. It's sort of ironic that I began this article comparing fantasy basketball to marriage, and how it's necessary not to put too much work on the computer, and basically none of that applies to "Basketball Reasons." Some super-computer must have done the drafting, like Watson the Jeopardy-winning trivia box, or Deep Blue, the chess-bot 5000. Even Lou Williams and Jonas Jerebko were good picks! So far, Jason hasn't made any changes to his team, but there's still time, and Shannon Brown is still overweight. Something's gotta give.