Hey, remember a few weeks ago when I announced who was in the newly-minted FakeTeams Hoops Tournament, and when I also announced that there was gonna be a round-by-round recap of everyone selected, featuring blurbs by all of the owners? Yeah, well... funny thing that.

See, making plans in December is easy, and agreeing to said plans is even easier. But finding the time for said plans smack dab in the middle of the Christmas season is hard to do, and getting all 14 members of the league to contribute blurbs proved to be, let's just say, difficult. So in my best Drew Brees impression, I'm calling an audible and changing the gameplan. The ones who were kind/free/bored enough to sit down and recap their lineups will get the benefit of having an article completely devoted to their team, in their own words. The others? Bubkis!

And yeah, I know what else you're thinking (unless I'm projecting, which I am). "It's January. Isn't it a little late to publish these blurbs now, two weeks after the draft and a week after the fantasy basketball season started?" Maybe. But you know what -- if Harry Potter can end its movie series with mid-twentysomethings playing teenagers, then this isn't the worst stretch in the world.

The first owner to speak on behalf of his team is Mike Gallagher, of FakeTeams fame. Here's his Twitter address.

Here's what he said about his team, back when it was 2011 and the season hadn't started...

"This was one a no-brainer decision for me in a nine-cat league. Gasol, who played in 82 games last year, is a pecentage stud, adds plenty of blocks and should do damage with points and boards now that the Lakers are no longer running the triangle. I really wasn't sure why he slipped in the draft this far since he was eight on my draft board for this league. Maybe it was his mildly strained hamstring or maybe people are just worried about his lackluster postseason. Either way, I'm a huge fan of this pick."

"Usually I'm never a fan of taking high-risk high-reward guys, but I really couldn't pass up this opportunity to draft a guy that could seriously have top-five value. E.J. is going to do some heavy lifting for the New Orleans offense and has a full arsenal of fantasy weapons. When Gordon was humming, averaged over 2.5 3PM per game the two months before his wrist injury. Speaking of injuries, most of the ailments that have slowed him have been of the acute variety and not something chronic like an Achilles or knee."

"If there's one guy I've going crazy over this year, it's Serge Ibaka. Ibaka had a block party in the postseason and had first-round numbers after the trade deadline. He has a solid shooter from the line and has shown no signs of getting hurt. Kendrick "Slim" Perkins won't impact Ibaka enough to knock him down and I was crossing my fingers for about 10 picks in hopes he was going to slide to me at 40."

"Johnson had a down year last season and his ADP suffered quite a bit. This year things are looking up with Jamal Crawford in Portland, Kirk Hinrich hurt and the young talent around him coming together to make Atlanta's offense look formidable. The Razorback drops quite a few dimes for a shooting guard, hits threes, shoots a great percentage from the line and should flirt with 20 PPG. Not to mention his stellar game logs over his career."

"I desperately needed a point guard here and to be perfectly honest, I was hoping that Kyrie was going to slide to me. Oh well. Harris can be a beast when he's healthy since he earns quite a few steals, is effective with help FT% and can drain a shot from downtown. The Jazz have a great low-post presence, so maybe a full offseason can help Harris get his dime totals up a bit."

"Another boom-or-bust pick here as I really needed a big in this spot. I was happy that Boozer was there since he was just what the doctor order since I was looking for a guy that would help my points, boards and FG%. He's another guy that will need to stay healthy though."

"Teaguebagger was another guy I had to have this year. He was one of the best players in the first round of the playoffs and showed he is capable of playing big minutes. Kirk Hinrich is out of the first month, but I'm hoping that Hinrich will be useless after Teague makes his case to be a franchise point guard. My team is hurting in assists, so I'd rather have a guy that will keep the turnovers down while providing threes and steals."

"Of course two hours I made this pick the Nick Young deal was signed. Although I probably would have taken the sophomore even with Young signed. He was arguably the best waiver scoop of the fantasy playoffs last year and he'll be the sixth man worst case. The other upside of this pick is that he's John Wall's backup at point guard. Wall dealt with knee tendonitis last year and it's likely to come back to bite him again this season."

"Once it gets past 100, it's all about upside. Kemba has huge upside and if he's able to unseat D.J. Augustin, the sky's the limit. He has already shown he'll be a phenomenal asset in FT% and he was shooting threes in the preseason, too. Of course he's probably going to be a major liability in FG%, but he's definitely worth the risk."

"Miles was another guy I was surprised to see there at this point. Miles is made for fantasy with great defensive numbers, launches threes and should get some serious minutes at the three. He had a stretch last year where he was putting up top-25 numbers over a month. I thought he was a fairly safe pick with plenty of room for improvement."

"The only reason I took Davis was because I was hoping there would be some good news before the season started. There wasn't and I already cut him for Nikola Vucevic."

"Camby was another guy that I wanted to see have good news before the season started. Nope. Already cut for Mehmet Okur."

"This was a bit of a homer pick and chances are he'll have a slow start since he's a bit raw. He does have a shot from distance and should get into passing lanes with his aggressive mentality. He is someone to watch in the early part of the season and I already cut him for Markieff Morris since I needed a big man.." 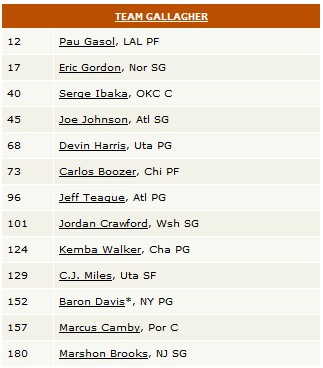 For the most part, Gallagher's team looks much as it did on Dec. 18, when the draft took place. There are only a few minor changes. Camby, Davis, and Walker are gone -- Markieff Morris, Mehmet Okur and Andrea Bargnani are in. Yes, in a brief lapse of insanity, I actually traded Bargnani for Kemba Walker on the assumption that Kemba would quickly get promoted to the starting lineup. At the moment, that deal looks to be a horrific mistake on my part, but that gaffe is Gallagher's gain. And hey -- who's to say how things will turn out in the end. After all, Charles Clay -- the Miami Dolphins backup tight end/running back -- wound up producing more fantasy points in Weeks 16 and 17 than Chris Johnson, and who in god's name predicted that? Still... that was a good deal for him.

Miles is trapped in fantasy hell in Utah, so Mike may lose patience with him before long. The rest of his team is loaded. Brooks could wind up producing Jordan Crawford-ish numbers in the interim that Brook Lopez and Kris Humphries are out, and Eric Gordon is eventually going to get on the court and play like he did in L.A.