I continue my march through the 2011 NFL season, trying to balance a life of writing, work, a social life, and being a Netflix/movie/television nerd while still watching at least one football game a day.

I have to work because it pays the bills. I want to watch Arrested Development at least once a day because it makes me feel good. And I can't help but write. I can't help but continue to put my thoughts and research on the internet, and it's a crazy feeling when my work helps, entertains, or informs somebody else. This wasn't supposed to be me. My teachers never thought I'd even go to college.

Maybe I have underachieved (or as it's rightfully called: been lazy) my whole life, but the past year and the past NFL season has sparked something. And it feels good. I have a long ways to go, but watching the entire season is a step in the right direction. At least I hope it is. It's going to take at least 127 Hours and if I end up cutting my arm off, I don't have the looks of James Franco in order to overcome having one less limb.

Anyways, sorry for being all serious and stuff lol! It is sort of a diary.

As I write this, the Ravens have advanced to the AFC Championship game, so some interesting things to watch for in this game.

A Matt Hasselbeck throw is deflected at the line of scrimmage for an INT. I'll be paying a lot of attention while doing this experiment to what interceptions were bad throws and which were "flukes."

And just like that, Joe Flacco throws a pick to a well-covered receiver.

So far, some nice throws by Matt. Tennessee killing themselves with penalties, and a shanked field goal by Rob Bironas.

10-10 at half but a pretty sloppy game. For those of you wondering about Matt, there's still some of the old Matt around, but less accurate on passes over 15 yards, a lot of check-downs that go nowhere.

Early thoughts on the Titans: If Chris Johnson can rebound, if Kenny Britt recovers, and Jake Locker can develop into an above-average QB... they could be something next year. Nate Washington is pretty solid too, as well as tight end Jared Cook.

In fairness, Flacco's 2nd INT of the game was deflected, but still to a well-covered receiver: 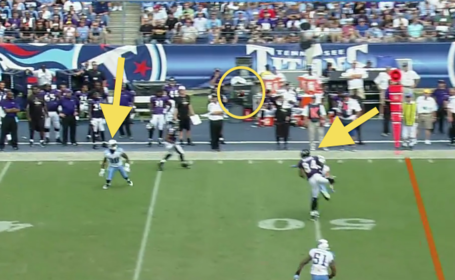 Ravens defense unable to stop the Titans on a long six-minute drive to seal the victory, much like how they couldn't stop Seattle when they needed to. Funny how the Titans lose to the Luke McCown Jaguars in week one, and beat the Ravens easily in week two. Ravens lose because of 3 turnovers.

Time for one more game tonight. Another game the Raiders can look back at and remember why they missed the playoffs. Should be fun to see all of these penalties.

Huge game for Denarius Moore (OAK) in the first half. He's a rookie that had some pre-season hype. Could see a bright future for him, though against the Bills... who knows.

31-28 Buffalo. Stevie Johnson playing a major role in this game and is a free agent now.

And here's some more Moore. This is where the play started: 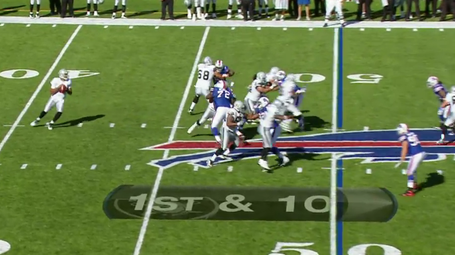 Does Jason Campbell have a good arm? He threw it to this spot:

That's Denarius Moore again, catching the go-ahead touchdown. I can't remember what happened to Moore this season. I guess I'll find out. (NO SPOILER ALERT!)

Who would have guessed that OAK-BUF would be one of the games of the year? (Games without defense are usually exciting.) 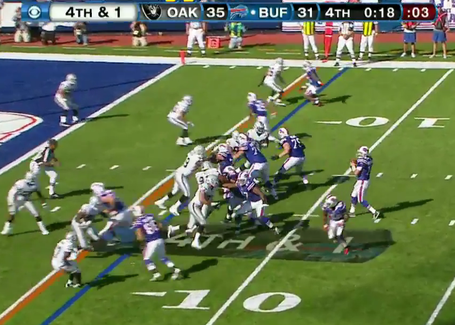 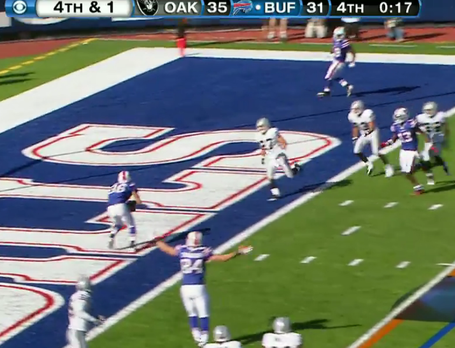 David Nelson. Game-winning TD. Raiders fell one game short of playoffs. Play some defense against a Bills team that ended up as one of the worst in the league.

Chalk up one of Campbell's interceptions to a desperation heave with :01 left. If you're looking at Campbell in free agency this year? Ehhh.... don't think so.

It's late, only time for one game.

Does Matthew Stafford make Calvin Johnson? Does Johnson make Stafford? Let's just say that they are a match made in heaven.

Wow, I stand correct about Jamaal Charles. I thought he went out for the year in week one, but he's playing now.

I think the "Moneyball" philosophy of football would be "buying yards on special teams." I mean, field position is so important that having a great punter and kicker could easily be the difference in winning games. The Chiefs don't have the best special teams. 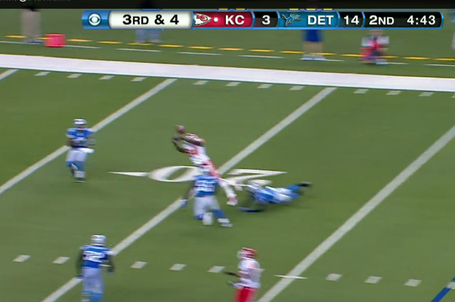 That bounces right out of Bowe's hands and into the Lions defense. This interception is clearly not on Cassel.

Cassel throws another interception (after a Jason Hanson FG) and this one is on Cassel.

Oh, Nate Burleson... I wish you had worked out here.

Kansas City just turned it over for the fifth time. This is where you say, "The game was deceptively close." Was the game close in score? No. But when you give the opposition the ball in your territory over and over again.... you're offense sure isn't making it easy on your defense. I guess what I'm saying is, Kansas City had the talent to keep up, if they hadn't made so many boneheaded mistakes.

With the Colts being so bad this season, you forget they have guys like Dwight Freeney. It always exciting (unless it's your QB) when you see a big hit coming about two seconds before it does, and it's the QB has no idea what he's in for. 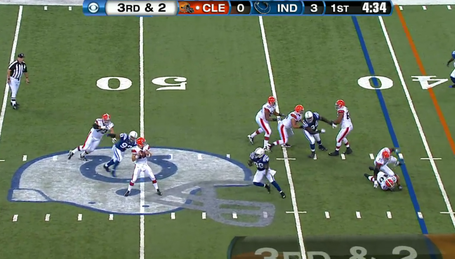 It looks better in game-speed, but Freeney knocks the ball loose and the Browns are very lucky to recover.

The Colts fail on third-and-one from the Browns six-yard line and settle for a field goal. Otherwise, a quarter in and the Colts look like the better team. Remember, this is with Kerry Collins.

The Colts just used a challenge on a two-yard completion. Not for a first down or anything. But to make it third-and-seven instead of third-and-five. I guess.. if you're the Colts... I guess...

Cleveland converted the first down.

Third and 12 and McCoy throws a TD pass. This wasn't challenged: 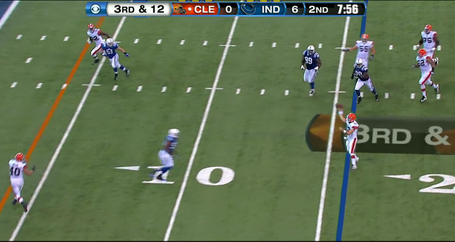 Now, look, his feet are behind the line it appears... but a two-yard pass was challenged and not this touchdown pass.

I'm really confused now. The Browns manage to get to the one-yard line of Indy and there is :33 left when it appears that Peyton Hillis has scored a TD. It's challenged and overturned, determining that his knee was down. Cleveland can avoid a 10 second run-off if they use a timeout but they decide not to. They have TWO timeouts left. Nobody has told new head coach Pat Shurmur that there are no roll-over timeouts. Hillis scored on the next play, but I really don't get it. Sure, with two timeouts, there's little risk with :23 left, but were they worried that Collins would drive Indy 50 yards in :25?

Dude, McCoy threw over the line AGAIN and no doubt about this time.. still not called for a penalty.

The entire Browns offense is Peyton Hillis and hoping that Josh Cribbs breaks one. And Hillis loses a fumble...

I don't know that McCoy is allowed to attempt a pass over 10 yards.

Collins looked decent in the first half, but the Colts can't get anything going in the second, only down five points. I like what the Browns are doing on defense, but stopping the Peyton Manning-less Colts tells me nothing. All I've learned is that the Browns need to replace McCoy and they'd be foolish to not get a QB in the draft or Matt Flynn.

Though the score was deceptively close after the Colts scored with the game almost over, you'd say "Well, it wasn't that close" because of it. Except that... it was close for most of the game and then Collins got turnover-happy. The funny thing is, I still think he's a better passer than Colt McCoy.

Sorry for writing so much on this game...

Greg Gumble opens with "You'll notice that the Jets are wearing those really ugly throwback uniforms." 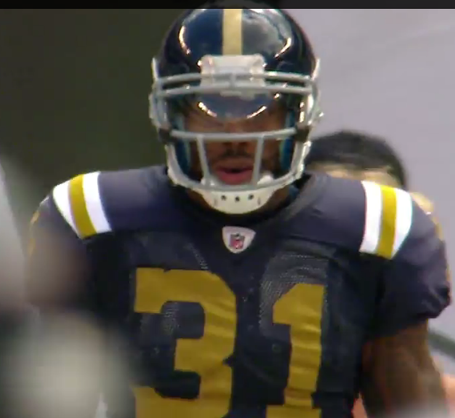 When we last left Luke McCown and the Jags, they had beaten the Titans... That was last time...

First Jags drive (already down 7-0) and McCown gets sacked for a safety despite the line of scrimmage being at the 8.

Josh Scobee makes a 55-yarder. Kickers seemed to be really good this year.

I don't know how many passes McCown has completed yet (it's mid-2nd Q) but it feels like one, and it seems like the Jets have dropped about three interceptions. Meanwhile, Mark Sanchez just threw his actual second interception.

Sanchez just tried to jog out of bounds and when he was in bounds, the Jags player tackled him and this was his reaction: 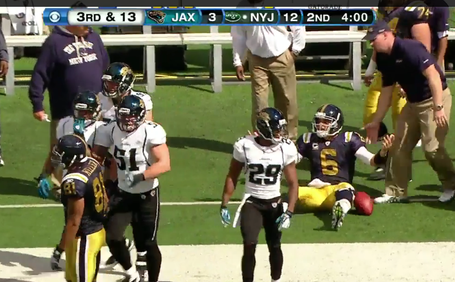 I hate you so much.

I wonder if one day people will think of Maurice Jones-Drew in the way that we feel about Barry Sanders now. Probably not, but I feel bad for MJD.

I'm going to go get drunk or something.

Sorry for not being a "GIF guy" yet, but this is the first image of the broadcast, and who can ever forget this: 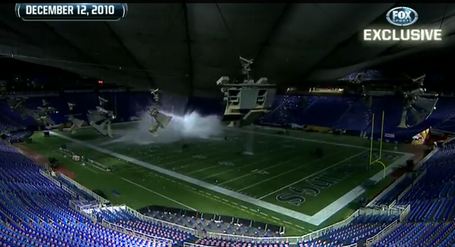 "$22 million to re-inflate the Metrodome" Screw the cost, I want to know how many people it took to blow and for how long.

That was not intended to be a setup for a "blow" joke.

Adrian Peterson runs for a first down on consecutive plays, and then three straight Donovan McNabb incompletions. Not even Bevell would have been that stupid. Right?

Mid-way through the 2nd Q and I'm not sure how the Bucs won a game this year based off this small sample size. Can't stop the run, getting shredded by McNabb of all people, can't run the ball, can't catch the ball.

Tampa Bay gets the ball in Minnesota territory for their best field position of the day and LeGarrette Blount scores. They trick onside kick and recover.

Minnesota recovers a fumble at the Tampa 11, but is called for offsides. It's funny, I've watched the play now at least 10 times and I don't see the offsides. The next play, on 3rd and 13, Preston Parker catches a pass that goes for almost 60 yards.

:31 left and the Bucs take their first lead of the game.

I talked to Sander of Bucs Nation as part of my "Don't Be the Bucs" series on "What not to do" or "Scaring an NFL team straight" and he gave us great insight on what went wrong. However, he also argued that Tampa Bay was better than their 4-12 record. Now, I only have two games of insight so far, but while I could agree that Tampa had to overcome the most this season (strength of schedule, youth, lockout, bad coaching) they look worse than their 4-12 record so far to me. I just saw them get outplayed for the majority of this game against a 3-13 Minnesota team led by McNabb, possibly the worst QB of 2011. If you asked me to name the top 30 plays of the game, probably over 20 of them would be Vikings plays. Tampa executed in the fourth quarter when they needed to, after the Vikings defense got tired, but for the majority of this game it was all Minnesota and the Vikings were a terrible team.