Share All sharing options for: UFC 142 Hits and Misses

With UFC 142 in the books, it's time for a self-assessment of the fight picks-both good and bad. All in all, UFC 142 was a great night of fights. If you were busy watching football on Saturday and Sunday, look up UFC 142, it is definitely worth watching once. 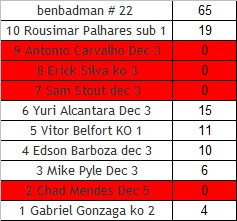 The most obvious pick on the card, Palhares took 63 seconds to make his opponent tap to a heel hook. Now 7-2 in the UFC, with only losses to elite middleweights like Dan Henderson and Nate Marquardt, Palhares is a safe pick against the rest of the UFC middleweights.

When a fighter is making his UFC debut, it's always risky to pick them to win. To win in a foreign country (Brazil) against a Brazilian, and then to assign a high lock to the pick, that is playing Russian roulette with your fight picks. Carvalho was heralded as a grappling wizard and for the first 3 minutes of the fight he looked the part. Then he tried to show off his awkward kickboxing powers, and two rounds later, he tasted defeat.

Alcantara is a talented fighter with a complete game-striking, takedowns, and a double-sided ground game. It will be interesting to see if this talented featherweight gets another fight this spring, or if the UFC saves this blue-chip Brazilian prospect for the June UFC show in Brazil.

5-Vitor Belfort-Knockout-1. Belfort wins in round one, only by submission.

Vitor Belfort took care of business in an awkwardly savage one-round brawl. The two stand-ups by the referee certainly helped Belfort stay on his feet. Belfort is a good fighter at 185, and he should easily win his next scheduled fight with The Ultimate Fighter: Brazil coach Wanderlei "the Axe Murderer" Silva.

If you look at the numbers, Mendes actually out-struck Aldo 13-to-11 in their brief one-round title fight. The challenger's lack of strategic clock awareness was his undoing, as he shot for a fatal takedown with 5 seconds left in the first round. This clock management mistake is akin to Marion Barber running out of bounds against the Broncos as the Bears were trying to run out the clock on Tim Tebow and Denver in week 14. Aldo got the job done, but he had to cheat a little to do it. When Mendes picked him up to slam him down, Aldo grabbed the fence to prevent the takedown. The fight may have turned out differently had Mendes got that takedown and established some effective offense.

Stout lost a competitive fight against an opponent who threatened with the takedown, thus taking kicks out of the arsenal of stout. Stout is a UFC gatekeeper, and he should bounce back with a win against a lower-tier opponent in his next fight.