So initially, I had planned to get these team-by-team testimonies of the FakeTeams Hoops Tournament members done by New Year's Day. But then I got preoccupied by stuff, and things, and whatchmacallits, and do-dads and a bunch of other holiday-related nonsense, which is why I've been a little slow in getting some of these articles out.

As a mea culpa, I'm going to combine the last two remaining dudes who wrote blurbs for all 13 of their players into one article, even though they have nothing in common other than that their first names begin with 'J.' Justin Kendall writes for The Pitch and has his own fantasy basketball blog, the link to which is below. Kendall was kind enough to step in on short notice when one of our charter members decided to amscray, saving me from finding a replacement in the middle of the Christmas holiday season, which would have been unbelievably stressful. Jeff Andriesse writes for RotoExperts and Damn Lies and Stats, the latter of which has a nifty podcast that you guys should check out.

After this, we got one more article to go, so bare with us and enjoy the different forms of writing by the people in the league. 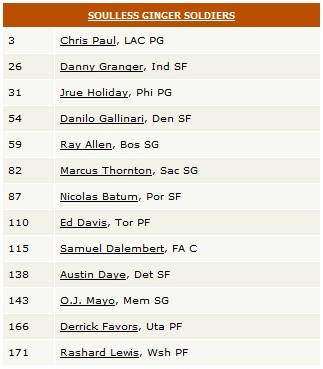 "This is what you do with the third overall pick (if LeBron James and Kevin Durant are already off the board). Paul is turning the City of Angels into "Lob City." Just ask the Lakers. Paul will feed Blake Griffin and DeAndre Jordan all the alley oops they can throw down. And they are going to slam a lot. I expect Paul to average around 10 dimes a game in LA. But the biggest reason I went with CP3 is the steals; 2.4 steals per game last season make him an irresistible selection. And no, I didn’t spend one second thinking of taking Dwight Howard (I had no desire to punt a category so early)."

"I had my fingers crossed that Kobe Bryant would fall. The like Vanessa Bryant, the other owners weren’t touching the Black Mamba. But Damn Lies & Statistics snatched him at 23. Damn is right. No Mamba for me led me to take self-proclaimed "Stern’s Bitch" Danny Granger. He’s a former first-round fantasy pick, and even with his injury history, I felt better with him than Kevin Martin, who has his own injury issues (plus, K-Mart’s bruised feelings over the failed trade to New Orleans might hinder him). I’m counting on David West’s post presence opening up more opportunities for Granger. Either Granger is going to average more points and drain a ton of threes, or he’s going to build another brick batcave."

"I joined the Jrue Holiday fan club last season. Holiday is primed for the third-year bump -- the year in which certain players (ahem, Derrick Rose and Russell Westbrook) blow up. Holiday may never reach the Rose or Westbrook elite level, but I expect his production to jump. I pegged Holiday for my second point guard, and didn’t hesitate to select him, building up my assists and steals (1.46 per game last season)."

"The Rooster’s break-out season was supposed to be last year. Injuries and the trade to Denver stunted Gallo’s growth last season. I’ve targeted Gallinari in every league I’m in. With most of the Nuggets’ rotation exiled in China, Gallinari is left to lead this team. He’s also going to knock down a bunch of threes, get some steals and hopefully block some shots. Gallinari has also been quoted saying he wants to get to the free-throw line more. He’s an excellent foul shooter (85 percent for his career). Fine by me with, Rooster."

"You’ve probably noticed by now that I have yet to draft a center. I did too. I was hoping Greg Monroe would slip to me here. I should have known better with so many experts drafting before me here. How about Roy Hibbert? Gone. Marc Gasol? Him too. I decided to go best available player and play to my strengths (threes, scoring, steals, free-throw percentage) and take Ray Allen. In hindsight, I may regret not taking three-point shooting centers Andrea Bargnani and Channing Frye. I assumed one of them would fall to my next pick. Yes, I know what they say about assumptions."

"Tim Duncan looked lonely in the draft queue green room. The fellas were wondering how far he’d fall. Well, he wasn’t getting past me. But Team Freaks grabbed him. So who needs a center? Not me! I’m going with Marcus Thornton and his fat Kings’ contract. Thornton was absolutely ruthless in 27 games with Sacramento last season (21.3 points, 4.7 rebounds, 3.4 assists, 1.7 steals and 1.96 threes). I wasn’t passing on the potential for him to pick up where he left off. Snagging Thornton here does give me second thoughts about passing on Bargnani and Frye. Eh, I’m going to let it ride."

"I was happy to get Batum this late for his across-the-board production. He isn’t a standout in any particular category, but he’ll quietly fill up stat sheets. I’m not worried about Jamal Crawford cutting into his or Wesley Matthews’ playing time either. And when Gerald Wallace gets injured (sorry, Crash), Batum will be there to step into the starting lineup."

"OK, if I must take a center, I guess Ed Davis will do. Davis has double-double potential. I’ll admit that I was hoping Chris Kaman tumbled to me here, but Madison grabbed the "Caveman." Feeling like a gambler at this point, I would have skipped Davis had Ricky Rubio slipped. Davis will do some damage this season and post decent numbers in blocks and boards, just not as much as I’ll need from my starting center. Gulp!"

"Sam Dam is an OK option at center ... when he has a team. And that’s the problem here. I’d heard the rumors that Dalembert might end up in Houston, and I had Sammy penciled in as the starter. Doesn’t sound like that’s going to happen. Also, a return to the Kings isn’t out of the question. I’m not feeling a stay in Sacramento. But let’s look at the bright side: Dalembert has played at least 80 games in the last five seasons. He’s good for at least eight and eight with a career shot-blocking average of 1.9. And he won’t kill my free-throw percentage (he’s averaged around 73 percent from the charity stripe the last three years). Not bad for a team desperate for a center."

"I’m stoked about this pick. Daye has looked good in a pair of preseason games, knocking down threes, stealing the ball and blocking shots. I know, we’re talking about the preseason. And the Pistons resigning Tayshaun Prince (why?) worries me, and maybe that’s why the fellas backed off him. But I truly am ecstatic about Daye’s potential this season."

"If ever there was a bounce-back candidate, it’s OJ Mayo, right? Somehow, Mayo went from two seasons of averaging 38 minutes a game and steady production to just 26 minutes per last season. Wha? Year four has to be better. If the former Trojan can return to form or get traded, he’ll be a steal this late."

"I’m thin at power forward. I wouldn’t exactly put the "power" tag before Gallinari’s "forward." I really like Favors. He was 2010’s No. 3 overall pick. I realize he’s in a stacked Utah front court, but the Jazz will eventually clear the logjam and Favors will be a starter. At least, I gotta believe. Really, at this point, I’d rather gamble on Favors than an also-ran big, especially if he can string together a few more games like the 25 and 12 off the bench in his first preseason game of this season."

"Getting a starer this late ... blah, blah, blah. Really, I’m wondering if there are enough shots to go around in Washington. My guess is there isn’t. Lewis will be my first cut of the season. Count on it." 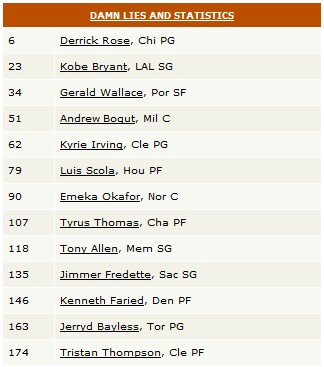 "I would have loved Dwight Howard 6th, but Rose is a fine consolation prize. He gives me an outstanding base in multiple categories. I had him 5th on my overall list going into the draft."

"Given his age and numerous nagging injuries, it would be foolish to target Kobe this year too high in drafts. But if he falls to 23rd, he's no longer a target, but a gift. He'll be motivated and lethal once again this year."

"This is where things started getting tough. I could have gone in many directions here but chose a dirty-work player like Wallace to balance out the high-end scorers I took in the first two rounds. The potential is there for a big year if the Blazers employ a small lineup often."

"With a gaping hole at center in round four, I grabbed what I felt was the best boards/blocks combo left. I love Marcin Gortat and Greg Monroe but my team needs dictated that Bogut was the best fit."

"In a tough, deep league like this you gotta reach for the guys you want. All the other point guards I really wanted (Ty Lawson, Kyle Lowry, Jrue Holliday) were naturally gone, leaving a group of secondary PGs with weaknesses. I went upside with my Irving selection, and I believe he'll be a stud for the Cavs this year in short time."

"This was just me taking a reliable big man who I felt was available in a good spot. I needed some boards and a solid shooting big man. Scola fit the bill."

"Blocks are always a premium, and I didn't have enough at this point. Okafor was the last remaining reliable shot blocker, and while this wasn't an exciting pick it could help me significantly in the boards and blocks cats."

"I really took Tyrus Thomas? I must have blacked out. It's easy to talk yourself into this guy thanks to his freakish abilities. Unfortunately he's an annual disappointment. He has a starting gig in Charlotte, so it will be fun watching him find ways to somehow blow it this year."

"I like TA a ton this year. He's a pick for steals, a category I could use another boost in, and his percentages don't hurt. He is one of those guys who is great for two games in a row, then awful for one. I hope he can improve on that consistency and I'd feel a lot better if OJ Mayo was out of town."

"Jimmer! I'm required by law to write "Jimmer" followed by an exclamation point upon first reference to the rookie guard. Am I all in on Jimmer this year? Not totally, but at this point in the draft I was taking specialists with upside. I'm hoping he's at the very least a help in three-pointers."

"Denver's frontcourt is paper thin, so I expect Faried to carve out a niche with his great motor and rebounding ability."

"Bayless certainly has a chance to usurp Jose Calderon this year, and when Calderon inevitably pulls something, Bayless will be a must-start."

"Simply a late flier, but I like his athleticism. The Cavs will play him plenty this year to get the No. 4 overall pick seasoned for the future."