Share All sharing options for: Kenny Watches All 256 Games from the 2011 NFL Season. Day One.

I'm not sure where an idea comes from, but sometimes I hate myself when I get one that sounds really interesting.

I think in this case, I was trying to talk about a player or a team, but in my heart I knew that all I could go off of was a box score. A set of numbers on a page. Or maybe a highlight reel. These kinds of things help and advanced statistics help even more, but they only tell part of the story.

It's like watching a movie compared to reading a script. The script will give you an idea of what happens, but the movie completes the experience. Even if sometimes the script was much better than actually having to sit through that junk.

Well, I'm about to sit through a lot of junk.

I'm going to watch every single game from this past season. Every single one. NFL Game Rewind allows you to watch every game and watch them in "Condensed" mode, which takes about 30-40 minutes and makes this whole thing possible. Easy? No. But possible.

I found out about the ability to quickly watch games from Danny Kelly of Field Gulls, where this is being simulcasted, and he led me in the right direction. He is also going to be watching every game. Power in numbers!

Why am I doing this?

- Not every game is junk. There will be a lot of good games that I'll get to watch for the first or second time.

- Knowledge is power. The more you know. Wonder twin powers, activate! From a fantasy perspective, this is going to give me more knowledge on players and teams that I ever could have had before. I think I did pretty good in my predictions this year, but with this power, hopefully I can take it to the next level. To a point where my head is the size of a giant medicine ball.

- I'm a little bit crazy. To watch 256 NFL games that can be potentially 40 minutes to watch, it's almost like watching The Simpsons. All of The Simpsons, of which there are nearly 500 episodes, but those are only 22 minutes long. How am I going to do it? I don't exactly know the answer to that, but I'm going to figure it out.

- I'm single. Which is sort of like a "chicken and the egg" argument, isn't it?

- I'm a completist. I hate seeing only 95% of something. I could watch only NFC West games or only NFC games, but then I'd wonder, "What if?" or "What did I miss?" I thought that The Killing was a terrible show about four episode in, but I still finished because I had gotten too deep into it. I don't walk out of movie theaters and I won't watch only a half of some game or turn it off when it's a blowout... we want the ball and we're going to score.

- I will actually finish. I will. Damn it, somehow I'm going to do this and I'm not going to take six months to do it either. This is going to take as little time as it possibly can.

I won't be posting these every day, though I will be watching games every day. I'll continue to run my diary of my experiences, but what happens next is going to develop completely organically. I've done a little bit of planning but not much, because you can't exactly plan for a project so large that you've never done before. Shit's gonna happen.

Things got kicked off this year with a possible NFC Championship game preview on Thursday, September 7th, 2011....

Week One, Game One

"Kicks off from the 35!" I remember when that was a big deal for awhile.

First play of the 2011 season: Rodgers hits Greg Jennings for 9 yards. First TD of the year is a back shoulder fade to Jennings.

Sproles gains 36 yards on a pass... at this point, nobody knew what Sproles was about to do this season.

Watching in "Condensed" version is great but wish I could somehow have the time to watch more of what's happening just for hilarity's sake. Though, it cuts off Al Michaels at interesting times... "John Kasay. The other day he has four children-" cuts off. What Al Michaels?! HOW MANY CHILDREN DOES HE HAVE TODAY?

"The best part about watching Drew Brees and Aaron Rodgers is their awareness to get rid of the football and not lose yardage, Tarvaris" is what I would say to Tarvaris Jackson.

The first punt of the year came at 8:55 in the 2nd Quarter. Offense is so much funner to watch.

This is Randall Cobb on a kick return after a Saints FG to close the gap to eight points: 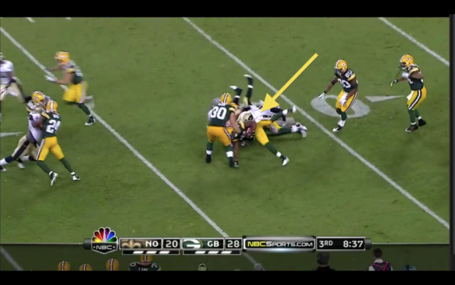 Yeah, he recovered from that near tackle for a touchdown that was a game-changer.

Saints down 15 score a TD with a little over a minute left. First onside kick of the year is no good. Brees gets the ball back with a little more than a minute left on his own 20 yard line and leads the Saints to the GB 9 with a few seconds left. What should have been the last play is PI on GB on a pass to Sproles, so Saints have it at the 1 with no time on the clock and down eight. The give is to Mark Ingram and HE'S STOPPED!

Saints were slightly overmatched by Green Bay, but not much. Biggest differences in the game: Colston fumble. Saints don't convert 4th and inches deep in Packers territory. Cobb kickoff return for TD.

From what I gather, mascarpone is like sour cream but better. I wonder how it would do as a sour cream substitute.

There is 7:05 left in the first and I think I've seen more incomplete passes than I saw in NO-GB already.

I've definitely seen more punts. Can't wait to see how the Bills end up blowing them out.

Matt Cassel just lost about 15 yards on a sack to force a 49-year FG that missed. Then on the next KC possession,Jamaal Charles fumbled. I'm sure fans were like "AHHHH, COME ON CHARLES! YOU BUM! I HOPE YOU TEAR YOUR ACL!" But of course they didn't mean it, they were just mad at the time. Which is like arguing with someone right before they die.

It's 20-0 and I honestly don't feel like either team is playing well.

Jamaal just scored. He was a really good running back.

I feel like when Ryan Fitzpatrick throws a pass, he probably does a Martina Hingis grunt.

Fred Jackson is fun to watch too. I'd love to see his highlights from Coe.* 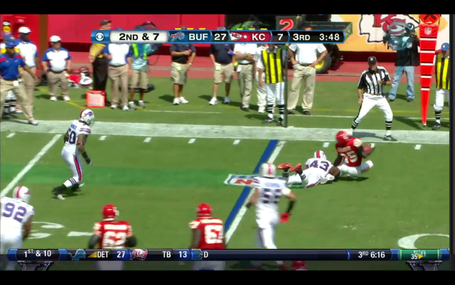 Kansas City's Offense is to Buffalo's Defense as Will Smith is to the suit in Men in Black.

*I would not really love to watch Coe highlights.

I hate AFC North football so much.

Joe Flacco's first pass of the year was a TD pass to Anquan Boldin and I love irony. (Because Joe Flacco is not good.)

I destroyed these pretzel chips.

I can't see what possibly looked bad about Rice coming out of Rutgers. "He's too small?" How many times does that excuse not apply to some of the top running backs in the league? (Rice, Maurice Jones-Drew, LeSean McCoy.)

Ed Dickson TD and I am really liking what I see out of Dickson.

They faked the extra point. Haha. In your face Steelers. 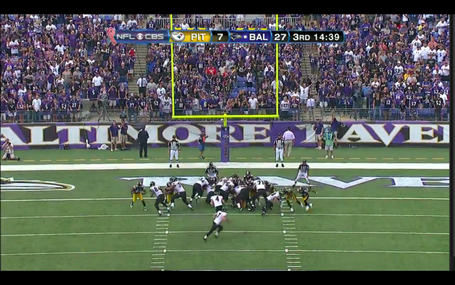 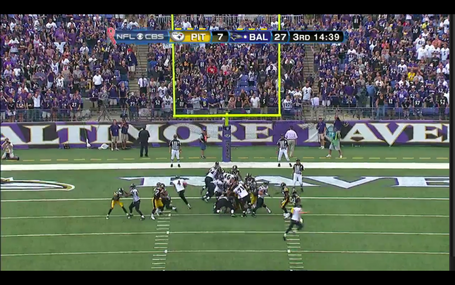 That's in your face.

And Roethlisberger threw another INT. In. Your. Face.

He just threw another one. To you, this is only a fraction of a second difference between the last interception and this one but for me, it was like one minute. Just to be fair.

Okay, now something new has happened. Ben Roethlisberger has thrown an interception.

The Steelers just fumbled twice. This is ridiculous. You can't make this stuff up!

You could easily make this stuff up. You can make anything up. Purple bananas flying to outer space while theme to Rugrats plays in the background.

Roethlisberger sacked to end the game and the Steelers comeback falls just short.

Took a break to watch 30 Rock. Something feels off. Is it me? Is it the show? I don't know, but John McEnroe unexpectedly saves the day.

In the future, they'll speak of this game as the "Luke McCown Win"

In the future of the McCown family.

Matt Hasselbeck sacked on the first play of the game. And we said he'd never survive another year in Seattle...

After one quarter, JAX leads 7-0. Each QB has attempted one pass over 10 yards. The difference between Jones-Drew and Chris Johnson looks immense.

Chris Johnson just lost about 8 yards on a pass. 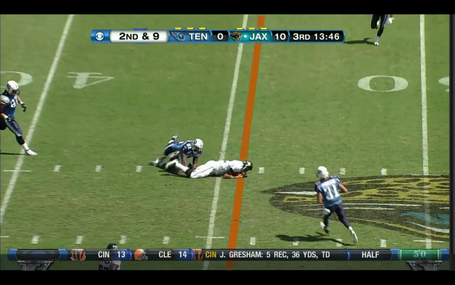 McCown scrambles through an open field and dives towards a first down. Go Crazy Luke! 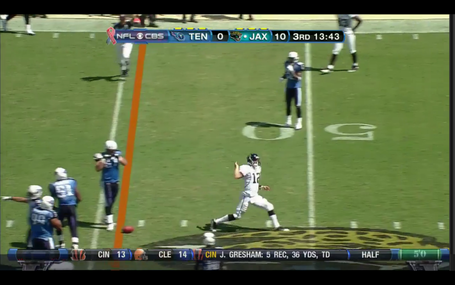 McCown signals for a FIRST DOWN!

Unfortunately, he only got 8 yards and that brings up 3rd and 1 and unfortunately McCown lost his job a week later, but he'll always have that moment where he almost ran for a first down!

Kenny Britt (RIP) just scored on an 80-yard TD pass from Hasselbeck, in which Matt was getting sacked while he threw the ball and just sort of threw it up there. And I don't mean in the way that makes you go "Wow, what a save by Hasselbeck!" but in the way that a blind squirrel finds a nut. Big difference when you watch the games compared to a box score.

Blind animals is a super duper sad concept, and they probably starve a LOT!

Hasselbeck throws a really nice corner pass to Kenny Britt for a touchdown that goes under review. The ruling is upheld. However neither of the below people shown below survive the season: 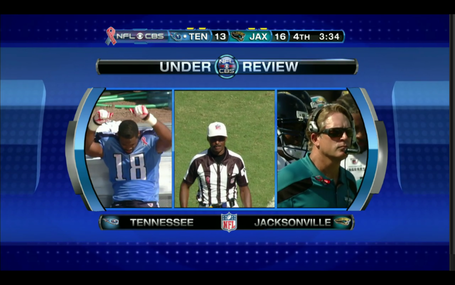 Except for Mike Carey I guess. You know I didn't mean Mike Carey.

So TEN pulled it to 16-14 and Matt got the ball with a little less than two minutes left and on his own 3. He got them close to midfield but couldn't complete anything to the sidelines (no timeouts left) and time was down to :20 left so he had to go deep, and his first deep pass of the drive was intercepted.

The Titans fell one game short of the playoffs and lost to Luke McCown and the Jaguars in week one.

Wrapping up day one. Coming up next Bengals versus BrownsohGodwhyamIdoingthis?