Neil Tardy writes for ESPN, and he's in the FakeTeams Hoops Tournament. That's pretty damn cool. I mean let's face it: there are a lot of great writing outlets out there, SB Nation included, but there's only one Mothership. So for Mr. Tardy to take place in our inaugural fantasy basketball experts league on short notice was a pleasant surprise, not to mention the fact that he clearly knows what the hell he's doing, since at the moment his 13-5 record is atop the league standings. (Followed closely by yours truly at 12-6.)

So what exactly does his team look like? Well, let's find out, shall we...

"I guess I was spoiled from a previous draft when, picking 13th of 16 teams, I had a choice between Westbrook and Deron Williams. I wasn't really looking for Stoudemire here -- I am aware of his production decline after Melo came on board. Still, can't complain too much about 20-plus points and a couple of blocks a night."

"Very happy with this pick. He may not progress as much as I hope this season, but I consider Wall the back end of the elite PGs. And I had to have an elite PG."

"I may regret passing on Ibaka (who went next), but I like Noah. I always have. Obviously I feel that he's capable of staying injury-free for a full season, even if he has yet to show that. He doesn't even have to play 82 games this year. That has to improve his odds, doesn't it?"

"I have Lawson in both my primary leagues, and I think I got him in every mock I did as well. And no matter how early I went for Lawson, at least one other owner was seriously bummed out about it. Like a lot of folks, I'm convinced Ty is ready for a big season."'

"Matthews is another player who found his way onto all my teams. I am fond of Matthews, but this was also the point in the draft I found most difficult to navigate. From about picks 60 to 80, there just weren't many players I wanted."

"I know this is early for Beasley, but again, there just wasn't anything else I liked here. Beasley could drive Rick Adelman crazy, but he could also be this season's Wilson Chandler (20 points, 1.0 3s, 1.0 steal, 1.0 block). And, gawd help me for being sentimental, but I was an original Minnesota Timberwolves season-ticket holder."

"Not crazy about this choice either. I'd have been happy with DeRozan, who went 92nd, but with John Kuester out of the picture, things are looking up for Stuckey and the rest of the Pistons. I may regret passing on Toney Douglas, who went two picks later, but I'm just not convinced he can be a full-time PG."

"The Clippers will be fun to watch in 2012. 2012 is the Mayan year of doom. Coincidence? Not sure. But Butler should be a nice contributor in Chris Paul's and Blake Griffin's universe."

"As popular a sleeper pick as George is, I was surprised to land him here. Very pleasantly surprised."

"The definition of reaching for the upside here. Cole has one nice scrimmage, prompting his coach to say really nice things, and I'm on him. We'll see what, if anything, comes of this selection."

"After getting Stoudemire and Noah early, I got a little self-satisfied with my bigs. The remainder of my draft reflects my need to build depth at PF/C."

"This might be the year of Kevin McHale's redemption. Besides being partially vindicated on Brandon Roy (McHale did fear for his health), he's a much better coach than GM. Hopefully Hill, the former lottery pick, progresses under the tutelage of the Celtics great. [UPDATE: Guess the Dalembert signing invalidates what I said about Hill...]"

"Movgov is apparently starting in Denver, but I'll still be surprised if he plays more than 18 minutes a night. Still, it's the 179th pick in an 182-pick draft. Did the best I could here." 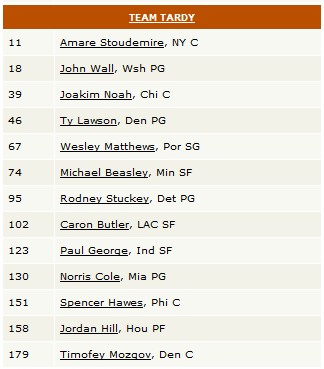 Under normal circumstances, this could have easily been a bad team. Beasley got hurt relatively quickly, John Wall is having a miserable year, and Rodney Stuckey has been awful when he hasn't been injured. However, Neil's managed to mine gold from his reservoir of sleepers. Ty Lawson, even with a slightly disappointing assist average, is on the verge of joining ESPN's "Undroppables" list; Paul George has been a terrific roto player; Spencer Hawes has come out of nowhere, as did Norris Cole in the brief time he had him. (He's since been dropped for Mario Chalmers.)

In the next edition of these draft results, I finally get around to writing about my own team.