Fourth verse, same as the first.

In today's edition, Ken Gayton of BlogDudes.com tells us what he thought about his drafted team in the FakeTeams Hoops Tournament of Supreme Importance ZOMG! Gayton and his cohort Dennis Velasco -- who's written for The Basketball Jones, True Hoop, ESPN, SI, Barkley's Mouth, and probably a dozen other sites -- are representing the "Blog Dudes" team in this competition, and Ken was kind enough to detail what the tandem came up with on Draft Day, Sunday December 18th.

"When I saw my draft position, I thought I was screwed. To me, it was the absolute worst pick to get. Drafting thirteenth in a draft of 12 players you can build a team around. Not only that, but I don't get to draft immediately back to back so that I can for sure pair certain players with one another. I was lucky that Jefferson fell to me because I had him as a top 12 player. He's rated lower on ESPN, but since we are counting turnovers in this league I think he should be higher. Not worried about Enes Kanter or Derrick Favors stealing minutes from him because the Jazz are going to want to get maximum value for Jefferson in a trade, thus wanting his stats inflated. Twenty and ten with two blocks a game is very realistic. Not to mention low turnovers and decent free throw percentages for a big."

"The guy I wanted to pair with Jefferson, Monta Ellis, got drafted so now I am left with either reaching for one of the second tier point guards or building on my strengths. I toyed with drafting Wall here, but I don't see much of an improvement on last years numbers. Everyone assumes that Wall will make this big jump because Derrick Rose made one last year. I don't see it. He won't make a lot of threes (and didn't work on that like D-Rose did), shoots poor percentages, and turns the ball over a lot. He's a slightly better option than Rajon Rondo because he'll get more points. I drafted Dirk instead, giving me another 20plus scorer with high field goal percentages and low turnovers. Guess I'm punting assists."

"Yup, another big. Paul George wasn't the only NBA baller that grew over the summer, Lopez shot up to seven feet which should help him grab more than six rebounds a game. Wait, he was always that tall? Well maybe he'll play more inspired with Deron Williams feeding him the ball? It allowed me to add yet another 20plus scorer with a high field goal percentage that will allow me to draft some gunners later. Throw in the blocks and good free throw percentage and Lopez is a solid pick here. Plus, he hasn't missed a game in three years....oh no....not good."

"I felt guilty drafting Ginobli. Dennis had talked about him being a bust this year in our fantasy hoops preview, and he asked me to co-manage this team with him. He couldn't make the draft so he's putting a tremendous amount of faith in me. And I stabbed him in the back. I thought about drafting Joe Johnson here, but his main value lies in points and getting good assists from the small forward/shooting guard position. While Ginobli gets me threes, steals, and gets to the line a lot while shooting a great percentage. Ginobli also gets good assists, but I am punting that category. I need the steals. I had to take him. I just had to. Forgive me Dennis."

"See, I had to draft Ginobli, I needed the good free throw percentage! This was my target for the next round. Bolstering my blocks and rebounds. I'm solid on points right now, and I have another target that I am confident I can get that will pair well with Jordan in the points and free throw categories. Plus, I plan on watching a lot of Clippers games this year (wait, did I just type that?) and now I can cheer even louder when Jordan throws down a monster alley-oop!"

"A gunner that I can afford to draft because of my good position in field goal percentages. Lots of threes mixed in with some steals and he doesn't hurt me in turnovers. A category we should win every week the way the team is shaping up. Our free throws aren't looking great right now, but I'm not too worried about it yet."

"No, Baron Davis and the the ghost of Mike Bibby don't scare me. He'll get me some more threes and steals, and someone has to play point guard on this fantasy team. Two months from now if Davis comes back maybe his stock takes a hit, but a lot can happen between now and then. I'm banking on him shooting a better percentage from the foul line and hopefully he's still able to take care of the ball as well as he did last year."

"Sure he is injury prone. But no one else on the Bobcats roster can score. Paul Silas has already said that Maggette will be the focal point of the offense and if there's one thing that Maggette can do, it's score when asked. He didn't do so well in Milwaukee last year, but I think that has more to do with the fact that Scott Skiles had the audacity to demand he play defense. He'll help with my free throws that were starting to look weak, and I can afford to absorb his high turnovers. You aren't going to find another 20 point guy this late in the draft."

"Low turnovers. High steals. Anything else he gives is gravy."

"This was one of Dennis' sleepers so hopefully it makes up for drafting Ginobli. Plus, Dennis is a Nets' fan (they do exist!) so I'm hoping this will make up for drafting Ginobli. Especially when Ginobli turns his ankle the second game of the season. This wasn't all for Dennis though. Morrow will pour in a lot of threes while not damaging any percentages. He won't add much else, but at this point I'm just drafting specialists to bolster a few categories I feel we're weak in."

"Maybe you can find another 20 point guy this late in the draft. With Rip moving on to Chicago, Gordon should be in line for some heavy minutes and an increase in points and threes. Okay, maybe it's unrealistic to think Gordon will average 20 a game, but he very easily could average 18."

"Maybe my worst pick. But Haywood could average seven points and nine rebounds with two blocks a game. Couldn't he?"

"Annnndddd, my brain has officially checked out. Actually it checked out after the Ben Gordon pick. I don't expect Haywood or Williams to last the season on our team." 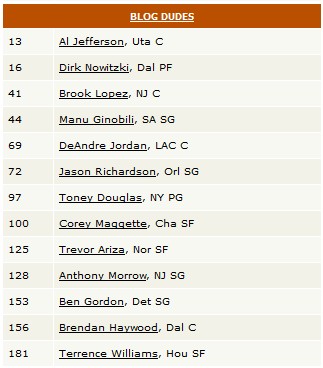 I don't know how many sidewalk cracks were stepped on, or how many times either Dennis or Ken walked under a ladder or saw a black cat, but their team has been ridiculously snake-bit only a few weeks into the year. Getting the penultimate draft position was bad enough, but to lose Brook Lopez, Corey Maggette and Manu Ginobili to long-term injuries, as well as dealing with off-and-on injuries from Anthony Morrow, Trevor Ariza and Toney Douglas? That's rough.

To their credit though, they've remained active and have a totally respectable record (8-10) considering how brutally the injury bug has hit them. There are plenty of new faces on the roster as I write this. Williams, Haywood, Morrow and Maggette are gone. Chandler Parsons, Matt Barnes, Ronnie Brewer and Richard Jefferson are in.