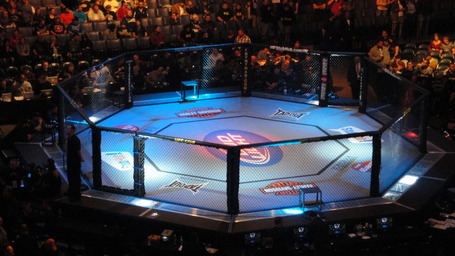 A week after UFC 140, it is time to come out of my man-cave and own up to my terrible fantasy picks. Five 2-to-1 underdogs won and few people saw unlikely outcomes like +400 "Korean Zombie" Chan Sung Jung winning in seven seconds. After writing compelling reasons for the underdogs on the main card and the ‘dogs on the prelims, I did not take my own good advice.

The upset fiesta that was UFC 140 Jones vs. Machida saw some of the lowest scores of the year in fantasy pick em challenges and "head to head" leagues. In one league, I lucked out and actually was matched up with a guy who had a worse night than me, and with only 5 of 12 fights picked correctly that is hard to do!

So let's break down the 5 hits and the 7 misses on the abomination that was Ben's UFC 140 fight picks:

The top lock of the night comes through. Picking the round that Jon Jones finishes his opponent can be a crapshoot-basically pick either 2nd, 3rd or 4th round and you have a 33% chance to get those round bonus points.

Pay attention to the trends! Frank Mir finishes 60% of his fights in the first round, and most of his wins are by submission. We knew that coming into the fight, yet most fight picks had Mir by decision or knockout. Next time Mir fights, just pick him by submission in round 1-unless he is fighting Brock Lesnar.

Cholish, a UFC newcomer who trains with numerous good UFC fighters, took care of business over Mitch Clarke, a Canadian prospect. Although he typically wins by slick submission, Cholish surprised with a ground-and-pound KO victory as he pounded out his gassed-out opponent. Still Cholish had impressive grappling, and in his next fight in what will likely be a better conditioned opponent, look for Cholish to find victory with a submission or a decision.

Rogerio Nogueira took care of business in dispatching Tito Ortiz inside the first round. "Little Nog" picked up his 6th KO win, and he is just as likely to finish by submission (6 submission wins) or by decision (8 decision wins). From here, Nogueira probably ends up matched up against a Forrest Griffin or Rich Franklin in a co-main event, or as a tough gatekeeper for an elite 205 pound prospect like Alexander Gustafsson (he fights at UFC 141).

more after the jump

Yves Jabouin won a split-decision, which is part of the reasoning he was only a two-point lock. His three wins in the UFC and WEC have all been by decision, so next time he fights just peg him for a decision win, should his opponent be someone he can beat.

Misses - where to begin?

Actual result: Hallman by submission in round 1.

Makdessi, a lightweight who probably has a cut to featherweight (145) in his future, was outgrappled by a pure grappler in Hallman, who normally fights up a weight class welterweight.

Hamman needs a new gameplan-the whole plan of "eating tons of damage in the first round and then hoping his opponent is tired from hitting him so hard" and turning it on for a comeback in rounds 2 and 3 is not working out too well for him.

Actual result: Hominick gets knocked out in 7 seconds-tying a "UFC record"-a record that Joe Rogan and Duane Ludwig will dispute until the day they die

Not much to say here. Hominick went from a possible 2012 title rematch against Aldo to now having to rebuild his standing in the UFC after two straight losses.

in one of the more unusual finishes you'll see-while defending a takedown against the fence, Hecht throws a perfectly-placed short elbow that rocks Attonito and leads to a quick finish. This was a Hail Mary pass loss for Attonito-he'll recover.

Claude Patrick decision is thy name. He will hang around in the UFC and go to decision against another lower-tier welterweight, maybe Jake Hecht at the Montreal show in 2012.

As a one-point lock, Lentz was an "upset pick" that did not come through. Bocek is good enough to lose decisions to the top 10 guys at lightweight, while beating the rest of his opponents with relative ease.

Better luck next time at UFC 141, where two fights seem like easy "perfect picks": Donald Cerrone by decision over Nate Diaz and Jon Fitch over Johny Hendricks in a "fitching".