Fantasy Football: An Early Look at 2012 Running Back Sleepers in the AFC

Share All sharing options for: Fantasy Football: An Early Look at 2012 Running Back Sleepers in the AFC

As we begin to transition out of the 2011 Fantasy Season and into the next, it's never too early to start looking at some names that might be of interest to you next year. Of course, a lot can happen between now and then, and it's certainly early, but how do we define "too"? What's the harm at taking a look? I have spent a lot of time at Best Buy in my lifetime without ever buying anything, sometimes I just want to dream of what may be possible in the future.

And that's the entire introduction. Here's some names!

BenJarvus Green-Ellis will be an unrestricted free agent after this season, and it stands to reason that he'd be better off trying to get a starting gig on another team than remaining with the Patriots. Not that there's anything wrong with being on a perennial playoff team, and there's also plenty of reason for him to stay and New England to at least try to retain him, but the current situation leaves open the door for him to leave.

One of those reasons is that the Pats spent a 2nd and 3rd round pick on two running backs in the 2011 draft. Ridley was actually the third round pick, but he's performed better than Shane Vereen this season. He's averaging 4.8 yards per carry on 48 attempts for 231 yards and a TD. BJGE has scored 21 touchdowns over the last two seasons, so if he goes, that leaves open opportunities for Ridley and other backs.

Cons: 95% of Patriots touchdowns are required by law to go to Rob Gronkowski. He's got competition. The closest thing the Patriots have had to an elite NFL running back under Bill Belicheck and Tom Brady was Corey Dillon in 2004.

Pretty much read everything above and apply it to Vereen. He could still win the job next year.

Could he be next years Darren Sproles maybe? I don't know. Maybe. Maybe the girl in the T-Mobile commercial and I will get married. There's a lot of maybe's in this world.

All the non-Patriots after the jump...

The former USC Trojan has shown up on sleeper lists a bit this year, but has yet to score a touchdown on 79 carries and 15 receptions in his two year career. He was an elite running back in high school, but failed to live up to that hype. The more you follow high school stars, the more you'll realize that this is very common and many players continue to get opportunities because they were great in high school. Do you think that every amazing ASB President goes onto be President of the United States, too? No, only like 1 in 4 actually go on to being a U.S. President.

LaDainian Tomlinson will be a free agent, and he's actually averaging a career-high 13.5 yards per catch this season, but how much longer will he play and how much longer will the Jets be interested in a running back turning 33? LT says he wants to play as long as he can, but how much longer can he? McKnight may step into the backup role behind Shonn Greene, a player that has not yet been counted on to carry a major workload. Kind of like me in college. And now... I still can't handle more than one, small task at a time. You want me to take out the trash? Can't do it, I'm chewing gum.

Some sleepers are very unknown, and others are players you know very well because they deeply disappointed you. Spiller is the latter. He was one of the most exciting players in the nation at Clemson and that's why the Bills drafted him 9th overall last season. Since that time, the Bills traded away Marshawn Lynch (it was only a year and change ago that the Bills had Lynch and Fred Jackson, two of the leading rushers this season) and gave Spiller the backup job. Which he pretty much failed at.

He's been experimented with at wide receiver, which is just another sign that Buffalo has little faith in him. He's only being given a chance now because of the injury to Jackson, and he's thus far underwhelmed. Still, he wouldn't be the first speedy, shifty running back to figure it out later in his career. Look at Reggie Bush. Seriously, look at him. 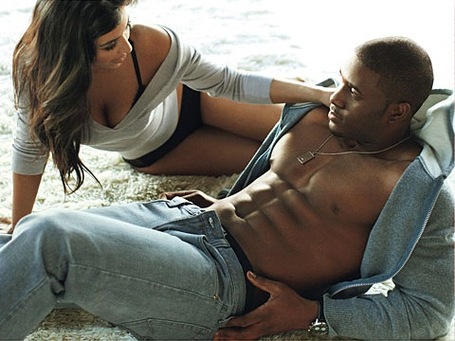 Jesus Reggie, what the hell were you thinking? Once he was unable to keep up with the Kardashians, he finally produced as a running back. We just need to get C.J. hooked up with a trashy media star and then have them break up and he'll be back on track in about two seasons. What's Paris Hilton doing? Ewwww... really? She put it where?!?!

Jackson will be 31 and coming off of injury, also important to note.

What a nice transition! Thomas was a sleeper in drafts this year, and he'll be potentially a deeper sleeper next year. He performed great in his first two games, putting up 202 rushing yards and catching a score, but he's done pretty much nothing since. Which makes him an afterthought, but a talented afterthought backing up a pony that's totally been one-trick for the majority of his career. I've always wondered what a two-trick pony is. How many tricks can you teach a pony? What KIND of tricks can you teach a pony? Can you teach an old pony new tricks? Is it wrong that my mind is in the gutter when I think of "pony tricks"?

Otherwise, Redman is "only" 27 and as a backup to Rashard Mendenhall, is averaging 4.4 yards per carry this season on 81 takes. Redman is a free agent after the season, but it seems reasonable that he'd stay in Pittsburgh, unless a team decides to make him a big offer and a shot at a bigger role. But he's not exactly Michael Turner. Mendenhall will be a free agent after next season, unless he gets a new contract, which I imagine he will.

Younger, more talented, Jonathan Dwyer is on IR and has flashed big play ability but not much else.

A Rookie in Baltimore?

Ray Rice is a free agent after the season, but if Baltimore lets him walk away, they might as well move the team back to Cleveland. Franchise tag.

A Rookie In Cincinnati?

Cedric Benson will be an unrestricted free agent, would it be wise for the Bengals to overpay for a 30 year old running back with off-field issues? They could come to a reasonable agreement. Compromise is nice. I once asked an ex-girlfriend if we could get busy in a Burger King bathroom and we compromised on a Ronald McDonald Playhouse.

Bernard Scott hasn't been much to look at. The Bengals could be looking at a running back on day one of the draft. Actually, let me clarify that with they should get a running back in the draft. Andy Dalton and A.J. Green need to complete the offensive triangle of youth with a fresh face at RB.

There was a lot of publicity on when Madden Cover Boy Peyton Hillis would get a new contract and how large it would be. The Browns did their best to kill that pub, kill that back, and kill John Madden. John Madden is dead right?

Hardesty was a really good prospect in high school and college that just could not stay healthy. I'm not comparing him to Frank Gore, because he's not as good as Frank Gore, but there have been situations in the past (Willis McGahee) of a back that started out his career with terrible injury and then put together a very nice run. (Running back puns!) As a feature back, if he stays healthy and wins the job and Hillis leaves, he could be a very nice sleeper pick next season.

Not a sleeper, per se, because we all know about Ben Tate. You know about Ben Tate right? I mean, you're reading an article about fantasy football sleepers for next season... I hope you know Ben Tate. Or you must be really bored. Did you already finish the latest installment of Angry Birds and this was your next time killer? That's interesting.

These numbers emphasize the fact that if anything happens to Arian Foster, he could be one of the top fantasy backs in the NFL. And even as a backup, he's still worth a flex-spot or an RB2 in deep leagues.

Kidding! But not really! Because what the hell Chris Johnson! Step it the heck up! Exclamation points!

Brown has stayed under the radar since being a first round pick in 2009. Pretty much everybody in Indianapolis blames Brown, and Brown alone, for going 0-13 this season. Maybe with a quarterback, he'll do better and live up to his draft status.

How many times does Moreno have to show up on a sleeper list and blow it? He was actually averaging 4.8 yards per carry before his injury. If he remains in Denver, remains healthy, and the Broncos remain a 55 rush/2 pass team, then he could turn into something next season. Maybe. It's a deep sleeper list. What do you want from me? Guarantees? I guarantee you that Knowshon Moreno is a real person and that's his real name and that's about all I can guarantee. I can't knowshon everything about everything.

If healthy, what will Charles draft status be? Second round? Third? Sixth? It's way too early to tell right now. He was a top three pick going into the year, and now his ADP is blown worse than his ACL. Which is exactly why he could be the best value pick of 2012.

Furthermore, Dexter McCluster is a lot like C.J. Spiller and what I said about Spiller earlier. Jackie Battle is also a guy that has carried the ball for the Chiefs sometimes. Charles actually did turn out to be the only one that was any good (so far) though.

Bush looks like the most likely back in the NFL to leave his current team to go be a starter somewhere else. He's played very well for the Raiders, putting up 764 yards and 7 touchdowns in 13 games on 3.9 yards per carry in place and in relief of Darren McFadden. He's going to go get starters money and the Raiders aren't going to give it to him. He could be the next Michael Turner... or he could be a bust. Bush was a star back at Louisville but injuries caused him to slip in the draft and lose an opportunity to be a starter right away. He'll be 28 next season, so his window to make a name for himself is closing. Quick Michael! Get through the window before it closes! We can pretend this is Raiders of the Lost Ark! Hey that was an accidental coincidence with Raiders-Raiders!!! FUN!