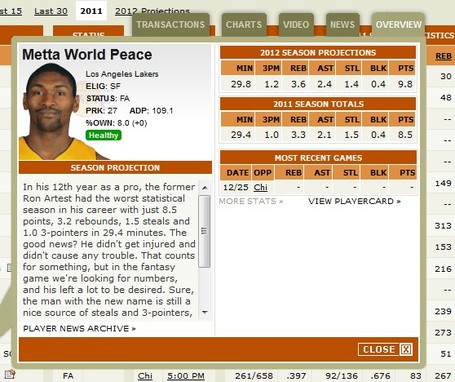 Yesterday, I made the pilgrimage to Yahoo! and ESPN to try my hand at some mock drafts. Part of this journey was to prepare myself for a few upcoming fantasy leagues -- including one you'll be reading about extensively in the near future (#teaserzomg!) -- but mostly it was to see if the industry had really accepted Ron Artest's ridiculous, and awesome, name change to "Metta World Peace." It certainly looks that way.

Artest, by the way, is something of an anomaly, besides the part where's totally crazy. He's fully capable of being a consistent fantasy performer, like he was in Chicago, Indiana, Sacramento and Houston, but he's become irrelevant in L.A. He's like a fancy flower (let's say a chrysanthemum, or whatever). You can't just plant him around Pau Gasol and Kobe Bryant and expect him to produce usable fantasy numbers like he used to. He has to be nurtured, groomed, handed the ball on a regular basis, allowed to take a wacky shot or two.

In Phil Jackson's ball-movement-heavy system, he never had a chance to be useful. But Artest, or Mr. Peace as I guess I should start calling him, has a chance to have something of a renaissance this year. If Lamar Odom and Pau Gasol really are traded for Chris Paul, as should be expected, that, along with the departure of Shannon Brown, frees him up tremendously on the depth chart. Suddenly the Lakers will be pressed for forwards, meaning Artest could see a nice upswing in minutes. Then consider that having Paul around could help him get open shots, and that his new coach, Mike Brown, has all the clout of a substitute gym teacher, and Artest could again find himself on fantasy rosters with stats similar to Tony Allen.

Could he be a Top 100 player? No, no, no, no, no. And you'll notice that I used the word "could" a lot, because Artest is a completely unpredictable person who's just as likely to run into a crowd and punch someone in the face as he is to become a bigger piece of the offense. This is the guy who once asked for a vacation in the middle of the season so he could work on a record label. Still, there's enough moving parts around him that if you're in a deep league and are pressed for steals, he's well worth your consideration.

For some other random thoughts I had as I scrolled through ESPN and Yahoo!, including who's considered the worst player in the league on both sites, click on the jump...