Let's breakdown the UFC 140 undercard. Before throwing down for the UFC 140 pay-per-view, make sure to catch these UFC 140 fights on network television on the Ion network and Facebook.com/UFC. Underdog odds are courtesy of BestFightOdds.com 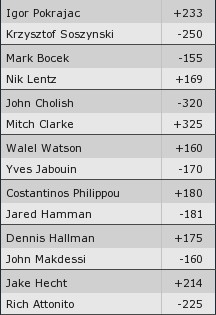 Igor Pokrajac has to be the only guy in UFC history without any tattoos, so your grandma would approve of the upset pick here. It's the battle of two men who have lost to Stephan Bonnar-Pokrajac losing by decision, while Soszynski was finished by Bonnar's strikes in round 2. In a UFC lightheavyweight tilt that is sure to have the Eastern Bloc salivating with national pride, the tiebreaker goes to Pokrajac the Croatian.

You gotta love a scrappy Midwestern wrestler who defies the odds. Lentz refuses to lose and after seven UFC fights he remains unbeaten (technically) with a record of 5-0-1 and 1 No Contest (a submission loss in June that was overturned due to an illegal knee strike). Neither guy will impress with the standup. In the 2011 battle between the wrestler (Lentz) and the jiu-jitsu guy (Bocek) go with the wrestler to win by decision.

Clarke, an undefeated Canadian MMA prospect, is making his UFC debut against a fellow UFC newcomer, John Cholish, in the opening fight. Since it is the first fight of the night, the rabid Canadian fans will be 100% behind the man from Saskatchewan. A wrestler with 6 of 9 wins by submission, Clarke excels when he can bully his opponents in the clinch and push them around before getting on top. Cholish will be no pushover on the ground, so Clarke will have to seize the opportunity and advance position should Cholish go for a difficult submission.

Just because UFC 140 is in Canada doesn't mean every Canadian fighter will win. In fact, Canadian UFC fighters have lost 45% of their UFC bouts in Canada. Let's be honest many of these Canadians like Jabouin are on the card to sell tickets, much like UFC shows in England have numerous British UFC fighters. Back to Yves Jabouin, before squeaking out a split decision win in his last UFC fight, he was 1-3 in his previous four UFC or WEC fights. Watson has the tools to finish Jabouin-live a little and pick the dog.

Three more UFC 140 underdog breakdowns are after the jump...

This fight is pretty even and could end up being a Fight of the Night, especially if Jared Hamman is willing to stand and bang and eat tons of damage on the feet. Philippou had impressive moments in his UFC 133 split-decision win over Jorge Rivera, and with a few minor technical improvements, look for the Ring of Combat veteran to be prepared to finish should the opportunity arise.

Hallman, a wily ground specialist, took the back of Brian Ebersole (fighting on the PPV main card Saturday) within the first minute of their fight at UFC 133. Against Makdessi, Hallman will be the bigger fighter, cutting down from a previous run at welterweight. Although Hallman came in heavy and missed weight by 3 pounds and will probably be docked 20% of his pay, this financial penalty can motivate Hallman to win and make that win bonus. Hallman also has the edge in experience, Saturday's fight against Makdessi will be his 67th pro fight and 9th in the UFC.

Pick Hecht if you just love to hate on The Ultimate Fighter alums, with Attonito being a cast member from the 11th season of TUF-although Attonito TKO'd Jamie Yager on the TUF 11 Finale so how can you hate on this guy? Hecht is a former Missouri wrestler and he stands two inches taller than his opponent. Hecht has stayed fairly active, and he has three wins in 2011. Lastly, Hecht has a decent Wikipedia entry for a guy making his UFC debut. You could do worse than picking Hecht as your handful of underdog upsets.

If you are supplementing your UFC viewing experience with some Fantasy MMA this weekend, here's where to play. Rock on!