UFC 139 is done and in the books, and what a night of fights it was. It seems like a rare luxury when a card loaded with intriguing match-ups doesn't at least slightly fail to meet expectations, yet in just the main card broadcast alone a fading legend scored what may be his last TKO, a former champion buzzsawed another former champion, an oft-shortchanged welterweight contender finally came out on the right side of a close decision and two future Hall of Famers handed in a fight for the ages. At the end of the day, no viewers were left wanting by the product on the television, but were your fantasy picks able to say likewise? 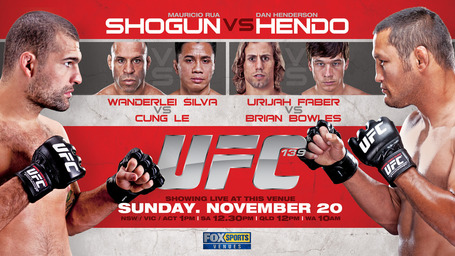 Although Faber technically holds the crown for the best fantasy value on the card with 1.62 points per dollar of investment, Silva's 1.59 is nothing to scoff at either, and both numbers are more than %150 the PPM return of third place play Stephan Bonnar. Faber's second round flurry was a fantasy player's dream. In just a matter of seconds he dropped Bowles, landed a flurry of significant strikes, took Bowles down and passed his guard before latching on a fight-ending submission, ensuring a rush of points in all five categories and stopping the fight's minute divisor at seven. Silva, meanwhile, scored all his points in the striking department, and while he did not provide the quick KO that would have seen him prove to be a fantasy goldmine, as the cheapest buy on the card his 43 significant strikes and knock down of Le in ten minutes of action was enough to easily exceed the low cost of buying in.

Salary cap duds and the ideal ticket after the jump.

With price tags in the twenties a fighter needs to hand in a quick knock down, ideally followed by a flurry of punches, a pass to the back and a submission to provide any kind of boon return on your investment, and even just a solid showing will require quick, decisive work. In failing to test Silva's chin with enough veracity, Le failed to live up to those high requirements. Fortunately for Le, he was spared from the ignominy of providing the least value by Kingsbury, who landed one fewer significant strike and spent another five minutes more in the cage than Le, most of it on his back getting out-grappled by Stephan Bonnar.

Although owners of Henderson (myself included) may feel a bit hard done by Hendo's Knockdown stat sitting at only one after that fight, despite hurting Rua on the feet on several occasions, the former Strikeforce champion was still providing top-half value well into the late stages of the fight. Hendo started the bout with a .88 points-per-dollar through one round, with the number dipping only slightly by the end of the third round, Hendo's last winning round, at .813 PP$. Although Hendo only landed 8 significant strikes in the fourth round, a takedown and two passes was enough to hold Hendo at .763 PP$, still better than half of the combatants from the prior four bouts. Then Hendo found himself on the wrong side of a beatdown in the fifth round, adding five to the divisor of his score with no offensive stats recorded, costing Hendo owners 20-percent of their payoff in the process as he fell to the 7th best play on the card.

With a return of nearly one point-per-dollar the event was anything but a disaster, although the picks were not without their share of disappointments. Kampmann delivered exactly as advertised, with a steady stream of offense en-route to a .885 PP$, and Silva managed to more than exceed hopes, despite not getting the quick KO I thought he'd need to provide value. The only regret there is the meager amount dumped on him. The same can't be said of Faber who rewarded the max-buy confidence with the best performance of the night. On the flip side of the coin, his opponent was less dazzling, as Brian Bowles was the worst performer not to be saddled with a $20-plus cost. As mentioned, Hendo's numbers could have been better, and nearly was on several occasions, but ultimately proved to not be a huge miss, allowing for the solid showing of Fake Teams' inaugural picks.