Fantasy MMA: UFC 139 Picking the Odds - Sure Things to Upsets

Share All sharing options for: Fantasy MMA: UFC 139 Picking the Odds - Sure Things to Upsets

Well it’s Tuesday and only 4 days are left until UFC 139 Shogun vs. Henderson.  Betting lines are up for the 7 televised fights, so let’s take a look at how the odds affect your fantasy picks for UFC 139.   (note: UFC 139 odds are after the jump)

Chris Weidman is a healthy favorite here and for good reason.  Having seen both men fight in person, Lawlor really has nothing to offer Weidman, and Lawlor will gas after the first round.  The only reason this line is not bigger is that Weidman has some injury issues he is dealing with.  Weidman should be one of your top 3 locks this weekend.

Bader is coming off an embarrassing first round tapout loss to Tito Ortiz at July’s UFC 132 show.  Brilz is also coming off a first round KO loss to the "The Janitor" Vladimir Matyushenko back in April.  Long story short, Bader is a solid prospect / gatekeeper at 205, while Brilz is a fringe UFC fighter.  Most UFC fans best remember Brilz as the guy who should have beat "Lil Nog" at UFC 114 in May 2011, instead of the Brilz who lost a split decision to Eliot Marshall.  After losing to Tito Ortiz in 2011, Bader’s career is in rehab, and luckily for Bader he is about to check out of rehab on Saturday night after he cruises to a 30-27 decision win.

UFC 139 aggregate odds courtesy of BestFightOdds.com as of Tuesday 11/15 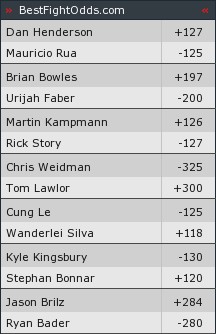 These fights are pretty even, and it is recommended to stay abreast of the latest news throughout the week to make an informed pick on Friday.

Expect this line to get closer as the late money comes in on Henderson.  Shogun is still highly ranked and even on some P4P lists.  Henderson is 42 but he is on one of the best winning streaks of his career.  Try and watch the UFC 139 weigh-ins this Friday before picking a winner here

The pick on Tuesday: 3- Dan Henderson-KO-5  (hedging with round 5  for a decision)

The homer pick is Wanderlei Silva, but listen to your heart and pick Cung Le.  Le was supposed to fight Vitor Belfort, who withdrew due to an injury, which gives you an idea of what level the UFC thinks Cung Le is at in the middleweight division.  After losing in 27 seconds at UFC 132, Silva will come out at a measured pace.  Expect Le to spend the first round finding his range, and then in the second round he pulls the trigger.

Under more normal circumstances, the Dane striker Kampmann would be a favorite against steel-chinned wrestler Rick Story.  But Kampmann is coming off two straight losses and Story is still getting love for his recent wins over Alves and Hendricks.  I have been in attendance for Kampmann’s last two fights, both closely fought decisions that could have went either way.  Luckily for Kampmann, I will not be in attendance this Saturday, and his straight punches should do enough damage to outpoint Rick Story.

This fight will be a crowd-pleasing slugfest.  Bonnar is good enough to beat the light heavyweights who enter the permeable borders of the UFC, but Kingsbury is a small step above the caliber of opponent that Bonnar can beat.  Bonnar is very hard to finish, so look for "the American Psycho" to get bloodied up over three rounds and lose a decision.

Faber is the money line favorite because the fight is in his home state of California, but make no mistake, Brian Bowles is a serious contender at 135 and can beat any bantamweight when his hands don’t break mid-fight.  In what should be an exciting fight, look for Bowles to get the better of the standup to edge out two rounds in a split-decision that will have the San Jose crowd jeering.

Stay tuned for a fantasy breakdown of the UFC 139 prelims later this week.