A personal anecdote, if you don't mind: At last night's other ALDS Game Two, the intoxicated gentlemen I was sitting in front of managed to stop bellyaching about the action in front of them long enough to notice the out-of-town scoreboard, which displayed the following score: NYY 8, DET 1.  "Whoa," slurred Guy 1, who had spent the last several innings unintentionally informing our section exactly how little he knew about baseball, "Verlander must have gotten ROCKED!"  Guy 2 is the kind of sports fan that looks for every excuse to give up on a team, so he immediately declared the Tigers' season over.  After all, he concluded, "The Tigers are Justin Verlander and a bunch of scrubs."  Since there were at least three things wrong with that short exchange, it was hard for me not to turn my head and disagree.  However, I had already wheeled around and taken them to task earlier for openly questioning Ron Washington's decision to replace David Murphy with Craig Gentry against a left-handed pitcher, and I didn't want to be THAT guy, so I kept my righteous indignation to myself.

Somewhere around the fifth inning of this game, when Max Scherzer had yet to give up a hit to the New York Yankees, I thought about those guys.

According to the info I gathered before last year's draft, Scherzer was ranked most often in the 20-25 range among starting pitchers (20th here on Fake Teams, as well as being named a "Breakout Candidate").  He finished 71st on ESPN's player rater, mostly due to posting a 4.43 ERA in the second incarnation of "The Year of the Pitcher."  His WHIP (1.35) finished on the wrong side of the MLB average, and while his K/9 was a respectable 8.03, it was down from previous years.

A deeper look, however, suggests that Scherzer's 2011 fantasy numbers may betray his true talent level, and that better numbers may be on the horizon.  For starters, his ERA-xFIP was a fairly healthy 0.73, suggesting that he was perhaps a bit unlucky to give up as many runs as he did.  More encouraging for me, however, are the month-to-month splits.

Scherzer's numbers could have been a lot worse.  He started off the season in a bad way, and at one point his ERA stood at an astonishing 7.95.  Around the All-Star Break, however, things began to turn around for him.  Perhaps coincidentally, Scherzer's about-face happened around the time the Tigers fired pitching coach Rick Knapp and asked bullpen coach Jeff Jones to take his spot.  It might be stretch to draw any kind of definitive conclusion from that happenstance, I'll admit, but Scherzer is a pitcher with a history of struggles related to mechanical issues, and if Jones was able to whisper something into his ear that helped him mentally and/or physically, that impact cannot be understated.

Allow me to continue to build my case.  Take a look at the following graphs: 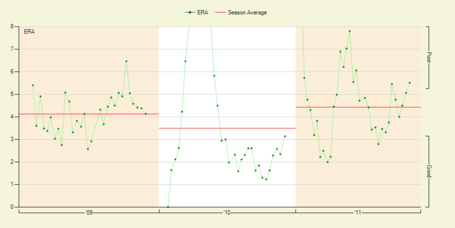 As mentioned before, Scherzer's ERA topped out at 7.95, but soon thereafter he was below the league average line (before finally finishing with a poorer number).  The WHIP graph tells a similar story: 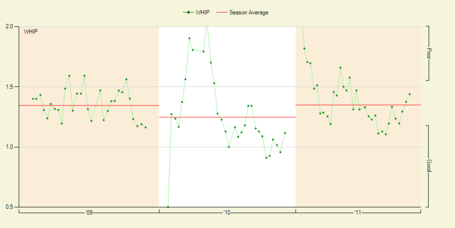 Let's try to find out why this would be the case.  As it turns out, just about every single one of his pitches improved, suggesting that a mechanical flaw may have indeed been the culprit.  First, let's notice that his fastball velocity improved as the year went on: 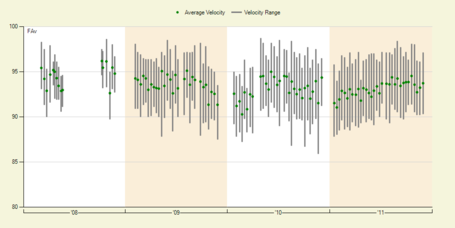 His changeup follows a similar path.  It's important to note that the pitch's "volatility" decreased as well - a good thing. 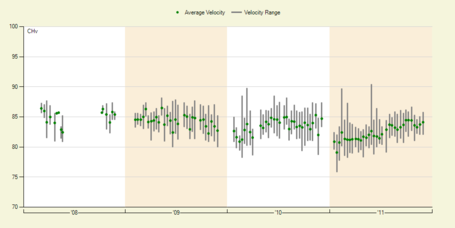 Finally, note the consistency of his slider's velocity during that stretch of very good games toward the end.  The slider is Scherzer's out pitch, and when he throws it well, the statistics follow.  When he doesn't have a feel for it (first half of 2011), well, you know the rest. 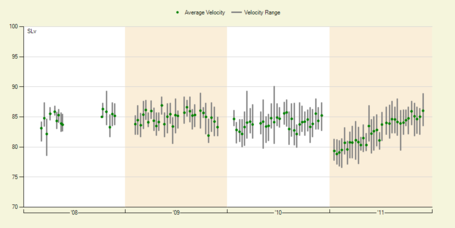 The result of higher velocity and more consistency with his pitches resulted in a profound increase in ground balls.  Scherzer posted the following ground ball rates for the first three months of the season: 37.7, 31.1, and 36.5.  Those numbers are ridiculously low.  After the All-Star break, the numbers were 48.9, 44.3, and 45.6.  The following graph is perhaps the best illustration of the sharp break between Scherzer's first and second half performance levels: 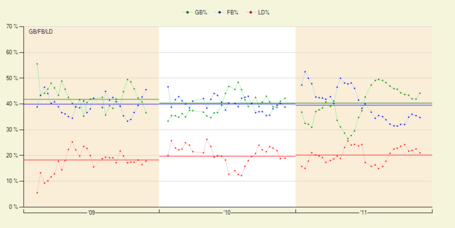 With the caveat that I haven't yet sat down to rank next year's starting pitchers yet, I'm comfortable taking him in the 25-30 range, just below where he went in 2011.  Of course, if he continues to perform well against playoff teams, even the idiots sitting behind me at last night's game will want a piece of him.

For more on this game, make sure you visit Bless You Boys (Tigers) and Pinstripe Alley (Yankees).