On Wednesday morning, I specifically travelled to New Britian, CT to see the Boston Red Sox top two prospects, 1B Lars Anderson and CF Josh Reddick.  Given New Britain is the home of the Minnesota Twins AA affiliate, I was able to see C Wilson Ramos, too.

One of the drawbacks of fantasy sports is getting too wrapped up in the stats and not taking the time to see the players.  This is especially true with prospects who are generally demmed good or bad based on just a couple/few major prospect websites.

What always strikes me is how small the players are.  I know that is a function of age - theirs and my own, but I was especially taken aback by how slight Reddick was.

While Baseball America lists him at 6'2, his frame made him appear much smaller.  Of course, that height could be inflated given Anderson is listed at 6'5, and the scoreboard had him at 6'1.

Lars Anderson came through for me with a moon shot HR to right center field.  Here are pictures of the three prospects - Anderson, Reddick and Ramos - listed by hitter.  Of course, Ramos is in all three. 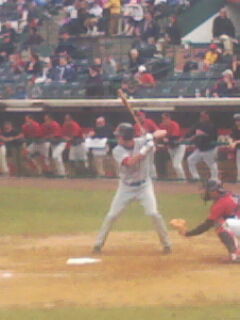 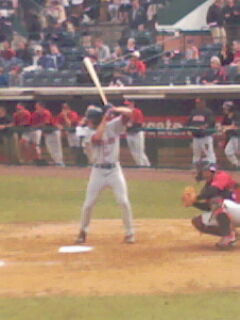 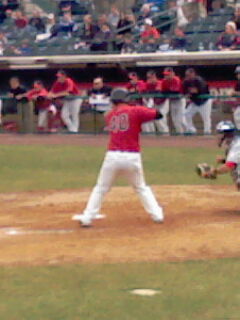