This is Chris from over at Dawgs By Nature, SB Nation's site for all the news and nuggets you need on the Cleveland Browns.

Before last season, nobody really wanted to touch most of the Browns' players prior to the first five or six rounds. Things have changed heading into this year though, as the Browns have a quarterback, running back, wide receiver, and tight end who could each be considered a top-5 player at their position.

Of those superstars, who should you try to snag first? Let's take a look... 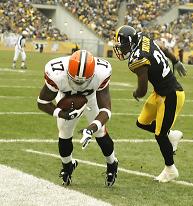 With acrobatic plays like this one against the Steelers, Edwards has defined himself as an elite receiver in the NFL.

Look no further than Browns Pro Bowl WR Braylon Edwards as the Browns' best fantasy option. Some fans may be concerned that he missed the team's final three preseason games, but fear not: the injury is not one that will linger. After the first preseason game, Edwards did something he'd later regret by racing teammate Donte Stallworth with his shoes off. Stallworth's cleat caught Edwards' foot and left a gash that required stitches. The stitches are healed now, so all concerns are gone.

Stat-wise, you never know how a player will be affected if a quarterback injury occurs. In Arizona, Larry Fitzgerald's stock may drop or go up depending on whether or not Kurt Warner remains the team's starting quarterback or if Matt Leinart is inserted back into the lineup. With Cleveland, both Derek Anderson and Brady Quinn have seemed comfortable in getting the ball to Edwards. After recording 16 TDs last season, the chemistry between Edwards and Anderson was reportedly ten times better in training camp this year than it was last year. The pair were connecting on several long touchdowns each day of camp.

Edwards gets the slight advantage as the Browns' best fantasy player over Anderson for one reason: Anderson will still turn the ball over. You may see Anderson throw for 2 TDs one game, but along with them will be 2 INTs. Sure, you'll love it when he has another 5 TD game, but realize that his distribution of stats differs from a Peyton Manning or a Tom Brady. 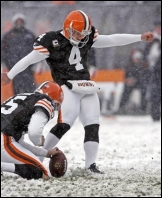 Phil Dawson's wild kick against the Baltimore Ravens off the goal posts twice and back out was the reason for instant replays being allowed this year..

Already having been one of the most accurate NFL kickers in history, Phil Dawson is a definite sleeper that can still be grabbed in the last round of your draft or off of the waiver wire.

If you recall, Dawson was 26/30 overall on field goals last season, and 7/8 on kicks between 40-49 yards. He also scored 42 PATs due to all of the touchdowns the Browns' offense put up.

Already in the preseason, Dawson has absolutely drilled two 50+ yard field goals, including a 53- and a 56-yarder, each with plenty of room to spare. He really made an effort to improve his leg strength during the offseason, and so far it has paid off. The Browns have a lot of tough games this season, so on the off chance that the offense struggles getting touchdowns against solid defenses, Dawson will be called upon often.

This category stretches across a broad range of Browns players. Do not think to yourself "I'm going to get a sleeper by taking the guy after Braylon Edwards and Donte Stallworth". Right now, the pool of players for the Browns' No. 3 receiver role is limited to Joshua Cribbs and Syndric Steptoe. Here's the problem: the Browns don't use their third wide receiver, partly because TE Kellen Winslow already acts as that guy.

Last year, the Browns designated WR Tim Carter as their third receiver all season long. What did he do? He had 8 catches for 117 yards and 1 touchdown all season long. Those do not sound like the statistics of a player worth stashing away on your bench. Bottom line: stay away from Cribbs, Steptoe, and rookie Paul Hubbard, unless an injury occurs to one of the starters.